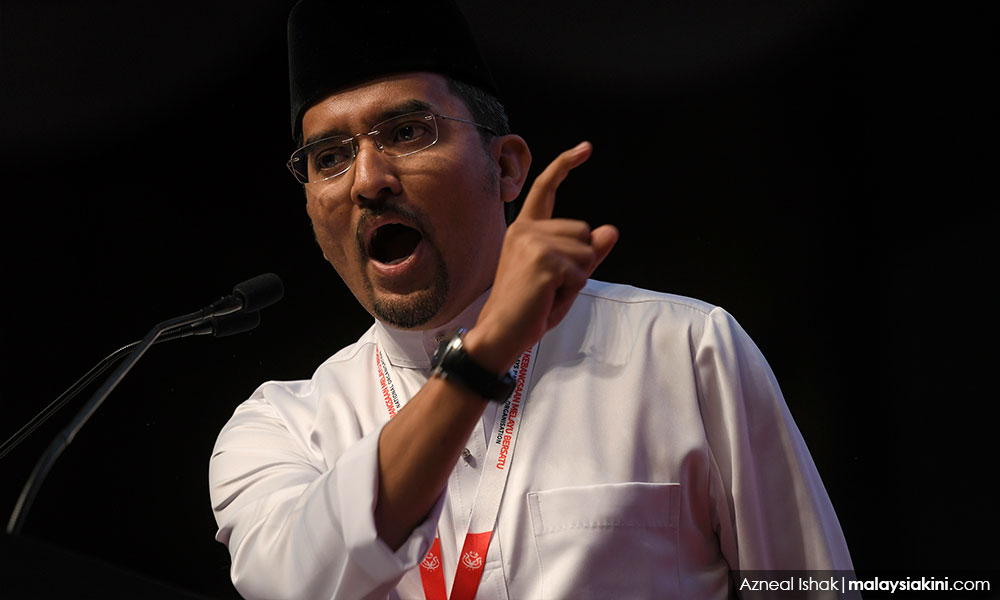 YOURSAY | 'It is not surprising that Umno Youth chief Asyraf is kicking up a fuss.'

Gerard Lourdesamy: Has Umno denounced the Hamas, Hezbollah, Taliban, Islamic State, Al-Qaeda, Jemaah Islamiyah, Boko Haram and Muslim Brotherhood, among others, who have all been defined as terrorist organisations by the United Nations, the US and the European Union?

Or do different rules apply to Malay and Muslim terrorists? Where is the evidence of a communist revival in Malaysia by former members of the Communist Party of Malaya (CPM)?

The gathering was an event to commemorate the 30th anniversary of the Hat Yai Peace Treaty of 1989 between the then Umno/BN government and the CPM. What is wrong with that?

If Northern Ireland and South Africa can have such a discourse about the sectarian violence and apartheid policies in their respective countries in the past, even involving formerly alleged terrorist groups like Sinn Fein/Irish Republican Army and the African National Congress, what is wrong for us to have similar discussions 30 years after the signing of the peace treaty and 59 years after the end of the insurgency?

In future, the police and army veterans should be invited to attend such forums together with academicians and historians from both sides of the divide.

The alleged Liberation Tigers of Tamil Eelam (LTTE) revival is absolute nonsense and, at present, sub judice as the matter is before the courts.

But most importantly, why is controversial Muslim preacher Zakir Naik still being protected by Umno and PAS on alleged humanitarian grounds despite he being a clear and present danger to national unity, public order and security?

Unlike former CPM leader Chin Peng's ashes, Zakir Naik is probably the biggest reason for the current chasm between Muslims and non-Muslims in the country.

Undecided: It is not surprising that Umno Youth chief Asyraf Wajdi Dusuki (photo, above) is kicking up a fuss.

After all, this is changing the fictitious Malaysian history as propagated by Umno/BN to demonise DAP supporters who are Chinese Malaysians and are generally unhappy just because of the unfair treatment of Chin Peng. This should not be interpreted as a glorification of communism.

There should be a need to find proper closure and reconciliation on an emotive issue affecting racial relations.

Anonymous_b3cdcd05: Asyraf must be bankrupt of issues to infer that the return of Chin Peng's ashes and commemorating the 30th anniversary of the Hat Yai Peace Accord is a revival of communism here.

Or is it the usual Umno bogey to incite the siege mentality among the Malays?

According to Prime Minister Dr Mahathir Mohamad, the return of Chin Peng's ashes cannot be worse than the return of a number of Malay communists that fought alongside Chin Peng.

Incidentally, there are also groups of Malay radicals that went in support of Islamic State (IS) that have returned quietly. So are groups of Malay terrorists awaiting return following the annihilation of IS in the Middle East.

So, why is the return of ashes of a lone Chinese communist being politicised by Umno? Wasn't it Umno/BN that went with a begging bowl to China to bail out the 1MDB heist that is now being repaid by Malaysian taxpayers? Why the double standards?

Are the ashes of a communist more grievous since he was a Chinese compared to those Malay communists that were allowed to return freely?

Since when was IS supporting Malay extremists given a special place in our annals and the narrative of Malaysian history the sole prerogative of Umno?

The truth was that CPM comprised Chinese, Malay and other races. For instance, Rashid Maidin and Shamsiah Fakeh were commanders of CPM.

You should ask yourself why Rashid was allowed to come back but not Chin Peng. After all, both were communists. And which party was part of the government at that time?

Kawak: Asyraf, why not gather BN and PAS Youth wings to demonstrate at the China Embassy? Since you hate the communists so much, you should show your displeasure to China for accommodating Chin Peng when he was in exile.

So Rashid and Shamsiah were not communists?

Bravemalaysian: Asyraf, it is people like you playing the race and religion narrative who pose the biggest danger to the stability and security of this country. People like you don't genuinely care for the race or religion but abuse it to further your own political future.

We love this country and we cherish the peace brought by treaties such as the Hat Yai Accord.

It’s people like you who can accept the rape of this country through massive theft, corruption and kleptocracy that almost completely destroyed the foundations of this country, bringing so much suffering to the people.

It’s people like you who can accept the Japanese who have done so much killing and damage, and yet cannot accept the repentant ex-communists.

You can accept former communist leaders who are Malays, such as Rashid and Shamsiah, but you use Chin Peng’s ashes, because he was Chinese, to create a racial issue.

Rojak: Thinking people know which groups fought most bravely against the Japanese occupation and struggled most consistently for decolonisation.

Thinking people know the extent to which the 'national historical narrative' is based on evidence and consensus.

Thinking people know whether the main threat of terrorism in Malaysia today comes from communism or from other belief systems.

The main problem is to know how much it is worth challenging the thoughtless claims of people like Asyraf. How do you debate with someone who doesn't have a clue?