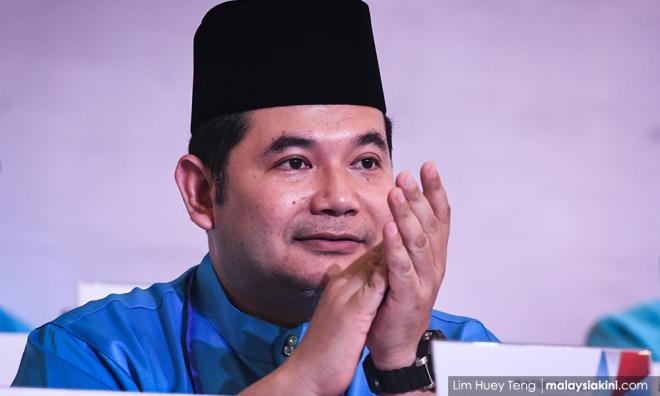 Rafizi to focus on AI... not Anwar Ibrahim but artificial intelligence

PKR vice-president Rafizi Ramli has reiterated his decision not to return to active politics, preferring to focus on his newfound passion for technological advancements.

And former Gerakan Youth chief Tan Keng Liang believes it is a sensible decision, based on what transpired during the PKR congress.

Rafizi, who is known to be aligned to PKR president Anwar Ibrahim, said he is at a stage in his life where he needs to learn.

The 42-year-old politician, who is a qualified electrical and electronic engineer as well as a chartered accountant, said: “Only through learning can we be better and contribute better.

“It's obvious I tweeted because I am making it clear I am not coming back to politics.”

in reference to a video he posted from a business trip to Taiwan, Rafizi added: “Excited to focus on AI (machine learning), machine learning and IoT (internet of things) - see what I found last week.”

Prior to joining politics, Rafizi was the Free Anwar Campaign representative in Europe during his student days. He and Anwar also share the same alma mater – the prestigious Malay College of Kuala Kangsar (MCKK).

In fact, Anwar had presented Rafizi with a gift in the form of a ring for being the best overall student in MCKK.

Meanwhile, Tan took to Twitter to wish Rafizi all the best in his new endeavour.

“Wishing all the best to Rafizi on his new career... probably a sensible decision after seeing what transpired at the PKR AGM over this weekend. Just madness!” he said.

Tan was alluding to the tension between Anwar's faction and that of his estranged deputy Azmin Ali. The congress, among others, witnessed a street brawl, walkouts and the trading of barbs.

Rafizi, who was the former Pandan lawmaker, did not contest in the last general election due to his court case on the exposure of banking details related to the National Feedlot Corporation (NFC) scandal.

Last month, the High Court in Shah Alam acquitted him of the charges.

Met after the decision, Rafizi said he is comfortable with being an ordinary citizen and harboured no intention of returning to politics.

“I am not interested (in returning to active politics) for the time being. Many do not understand that the political field takes up much of my time and energy from me and my family.

“I have mentioned from the beginning that I am not interested in joining the government or a public post.

“I reckon that in the next three to four years, I just want to be an ordinary person,” he said.

Last year, Rafizi, who was seen as a rising star in Malaysian politics, failed to unseat Azmin as the PKR number two in the party elections.