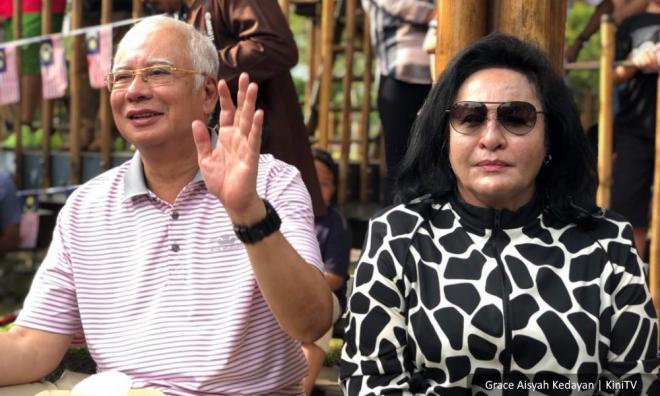 Yoursay: Even donations are not meant for lavish spending

YOURSAY | 'Najib must explain from whom he received the money.'

Spending at luxury stores were for Rosmah and diplomacy, says Najib

Zakar_Naik: So former prime minister Najib Abdul Razak is claiming that he can spend whatever he wants, since the funds are in his personal bank account?

The question is, how did he get hold of these funds? Najib says the funds are donations. If so, he should disclose who actually made those donations and for what purpose they were donated?

Come on, a prime minister can't be accepting donations for no reason, right? Otherwise, the conclusion must be that the "donations" are... (I guess we can all fill in the blanks).

FlabberPro: I cannot believe Najib's stance in his defence. It all shows his lack of moral compass and integrity and his deep narcissistic love for himself.

It is amazing that he actually assumes that the people are naive and would believe everything that is spewing out of his mouth.

I cannot believe this man was once our prime minister managing our country. His excuses for spending luxuriously from his bank accounts shows his apparent blatant abuse of the powers that were entrusted to him back then.

All he did was to deny, and all he believed to be true is truly delusional.

Bert: Indeed, Najib is trying to fool us. At least credit the rakyat with some intelligence. He was a PM, a finance minister and Umno president.

I am very surprised that he claims that the money in his bank account was a donation and did not know that it was from SRC International (then a subsidiary of the country’s sovereign wealth fund 1MDB).

Who are you trying to fool, Najib?

Malaysian-United: There never was any donation. Najib knows that he is cornered, but he has no choice and so sticks to this ridiculous story.

But let's humour ourselves and play along with it - I think he once said the Saudi king gave him the money in appreciation for the country's effort and his good leadership in fighting religious extremism, promoting Islam and stuff like that.

And what does he do with the money?

He bought a RM500,000 watch for his wife, spends hundreds of thousands on hotel accommodation and over RM3.5 million in jewellery for the Qatar PM's wife! So much for being a good Muslim leader.

3D Waffle: It’s not unusual for a delayed birthday present to be purchased 18 days later. However, using the alleged donation money from his bank accounts to pay for credit card bills is totally unethical.

The Qatar prime minister and his wife probably bought Rosmah Mansor a gift worth RM50,000 but buying jewellery worth 70 times the total value of Rosmah's gift from the sheikh and his wife is illogical, laughable and senseless.

PB: If the Pakatan Harapan government is smart, it would use this and make a recurring narrative out of it.

The people are angry about the cost of living and here Najib spent half a million on a birthday present. This is how out of touch, vile and greedy Najib is.

This is the narrative and the story - the birthday watch - that should be told over and over until the next election.

Kawak: Najib, if it was really a donation from the Saudi king, prove the money trail.

That's the crux of the whole matter. The defence's premise is that it was a personal donation from the king, so he has the liberty to spend as he likes.

Apparently, this was not a donation to the nation. If the donation was for the Malaysian government, then he’s got a problem.

Rick Teo: Only an insane person would believe his fairy-tale story. I bet all the jewellery were bought specially for Rosmah.

No one in his right mind would buy such expensive gifts for anybody. Not even Bill Gates, the richest man in the world.

Anonymous_42d5b9b8: Rosmah wanted the expensive watch and commanded her money man to pay for it. And Najib meekly obeyed her and he does not care about the cost of the watch as it is not his money.

Apparently, stealing is okay with Umno leaders and supporters as long as they are doing the stealing.

Beeja: He had to cut short his golfing holiday with the Obamas (I wonder how much was paid to the lobbyists who arranged this?) because it was untenable for him to ignore the disastrous floods in Kelantan and Terengganu.

He had no qualms, however, to later continue with his holidays in Bangkok when he should have returned pronto to Putrajaya to manage and oversee the evacuation and extend assistance to poor flood victims.

Anonymous#$&: Many Malaysian students, local and abroad, are struggling to have two meals a day. They are hoping their prime minister would take an interest in their plight and perhaps help them.

Instead, he is spending money he suspiciously received from unknown people at luxurious stores for diplomacy and for the love of his life.

Miaowing: First of all, Najib, you don’t know how the money came to you, but at the same time you have no qualms spending it.

It is perverted logic when you claimed the money was donated and claim the right to spend it as you wish.

FairMalaysian: Floods, victims and a watch for Rosmah to the tune of half-a-million ringgit.

Is this a PM who cares for the people? Such expensive tastes – indeed, I can't help comparing Rosmah Mansor with Imelda Marcos.