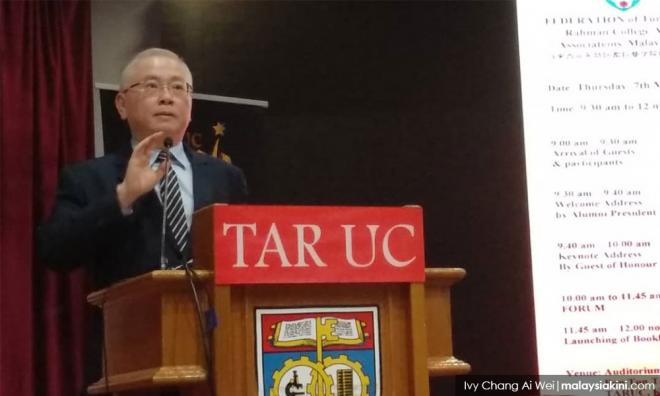 Yoursay: How hard is it for MCA to give up TAR UC?

Anonymous 1574178243904: I kept scratching my head on why MCA kept saying the government has breached a binding contract by not giving RM60 million to Tunku Abdul Rahman University College (TAR UC).

The above article clearly stated that the special instrument of government presented to Parliament in 1972 that committed the government to provide 1:1 matching grants to Tunku Abdul Rahman College (TARC) was revoked in 2013 when it became TAR UC.

The elephant in the room is why did MCA allow the previous instrument of government to be revoked? MCA basically traded off their right to receive a guaranteed sum in return for an amount that can turn out to be a zero. Why?

Shovelnose: I am appreciative of the various governance policies put in place, MCA’s role in setting up TAR UC and developing it till the current stage, and all the financial contribution to the university by Malaysians of various walks of life.

If TAR UC prides itself as a privately-funded institution, any handout from the government would be considered as a bonus only and not a right.

For the university to be totally independent, one cannot expect the best of both worlds.

Arthur Yong: I’m confused as to why MCA is against the government handing the annual grant to a politically independent body like the Tarcian Alumni Association (TAA).

MCA’s lame argument is that TAA is using TARC’s name without paying for copyright. MCA should just go ahead and sue them with copyright infringement. I doubt this will be well received by the public.

Ultimately, the real issue here is that MCA remains committed to keep TAR UC under the party to use a political weapon. If MCA had genuinely wanted the best for TAR UC, it would have cut ties with the institute a long time ago.

Anonymous 1574178243904: I find it disturbing that the very people involved in the approval for TAR UC to be converted from a public to a private trust, such as the previous TAR UC president and the Alumni Association, are the same people with control of the RM40 million cookie jar.

I simply don't have faith in TAA because it has been sleeping on the job for far too long. The TAA president's comment in Astro Awani complimenting the TAR UC administration shows that he really has no clue regarding the true situation.

This article claimed that the cost of salaries in TAR UC to be over RM100 million a year. But it fails to mention how much tuition fees were collected.

Let's suppose each student pays RM10,000 in fees annually. In a year, the university can collect about RM280 million from 28,000 students and yet they are asking for more money. No wonder there are private colleges popping up everywhere.

What was also left out of the long-winded article was the amount of fees collected from students over the past 50 years. In addition, in the past, TAR UC collected development fees and that could easily be over RM100 million. The parents of students were also sent letters asking for donations.

All told, the amount paid by taxpayers (RM1.35 billion through government grants), the Chinese community and the students far exceeded what MCA has contributed financially.

Yet, MCA claims TAR UC to be theirs. The large cash pile after only 50 years shows that TAR UC has not been giving out proper benefits to its students. It is like a charity keeping most of the collected donations instead of disbursing the funds to the needy.

Anonymous 1398063222: MCA could allow the public to understand the issue better by being more transparent, such as revealing TAR UC’s profit and loss statement and the balance sheet for the past five years.

Let's see how the university has been utilising the grant and if it is making a profit (or loss) despite the affordable/subsidised fees. Being prudent in financial management is a given and is to be expected of any self-respecting organisation.

Anonymous 1574178243904: The MCA spokesperson described TAR UC as “a private institution and one that is still in its quest to become a full-fledged world-class research university”.

I have to hold back my vomit. MCA admitted TAR UC is private and is yet asking for government handouts.

The statement on world-class research university took the cake. We make jokes of public universities’ (IPTA) professors failing to live up to standards but TAR UC's full professors cannot even compete with those in IPTA.

We laugh at Entrepreneur Development Minister Mohd Redzuan Yusof's flying cars but equally ludicrous is TAR UC spending thousands trying to use robots to plant and harvest Bentong gingers. As advanced as the US and other Western countries are, they still have not used robots click-clacking round the fields to plant and harvest their crops.

While its peers (for example, Taylor's) have long attained university status, TAR UC only managed to get its university college (UC) status in 2013 after decades of churning out unrecognised diplomas.

Of course, they blamed the BN government. The eventual recognition of the advanced diplomas and the upgrading to UC were all pre-election goodies showing how they have advanced through the backdoor.

When it was time to redeem the promise of UC status from former prime minister Najib Abdul Razak, the Education Ministry found TAR UC had no proper paperwork to upgrade to UC. The ministry had to send in a special team to help TARC collect and complete the paperwork. That is how competent TAR UC is.

Ferdtan: Institute of Strategic Analysis and Policy Research (Insap) chairperson is MCA senator Ti Lian Ker and its office is in the MCA building.

I guess it belongs to MCA. Thus, the one-sided view, true or false, by Pamela Yong, the Insap deputy chairperson, is considered a biased argument and should be taken with pinch of salt.

Enlighten: Please read Yong’s comments carefully and take note of the history of TAR UC, with regards as to why it was set up in the first place.

I would say TAR UC will only cease to exist or will lose its original purpose if MCA has completed its mission to ensure all the public universities are opened to all without quota and all admissions are merits-based.

If MCA was to get out now, TAR UC would still depend on the government’s grants to keep the fees affordable. What will happen to the university if any future government decided to make the grant conditional, such as imposing an admission quota similar to those at public universities?

Fair Malaysian: No educational institution receiving substantial government funding should have political affiliations. Why is it so difficult for MCA to relinquish its political hold and make TAR UC a truly independent institution?

The Chinese Malaysians have a wide pool of educationists and the government funds amounting RM40 million is still going to help students’ pursuit of education without any political affiliation.

MIC's Aimst University in Kedah was built with public funds, only to be claimed by then party president S Samy Vellu as his own.

It is a stark reminder of how it is time to change the BN's style of governance. With MIC no longer in the ruling government and former minister Samy Vellu’s deteriorating health status, the future of Aimst University does not look so rosy.

Because of that, TAR UC students in Kampar are still paying high rents or are cramping up to five people in one room in order to save costs.

Wong Fei Hoong: MCA should just sever its ties with TAR UC in order for the university to continue receiving funds from the federal government.

If MCA is against the conditions imposed by the government, it can choose not to accept the government money and keep TAR UC as a private institution, just like any other private colleges in the country.