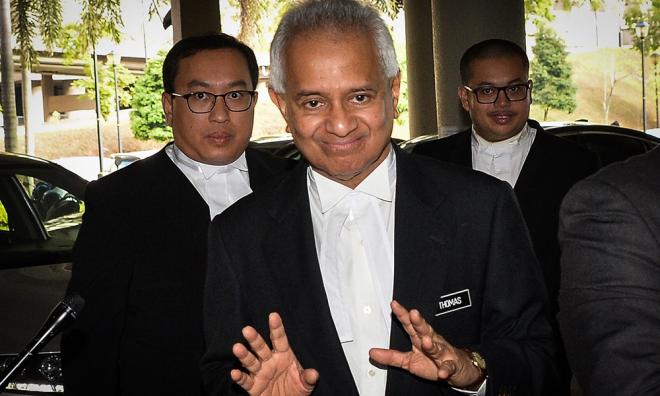 The Attorney-General’s Chambers will not appeal against a court decision which ruled that Section 13 of the Security Offences (Special Measures) Act 2012 (Sosma) as ''unconstitutional''.

This came following last month’s Kuala Lumpur High Court’s decision to grant Gadek assemblyperson G Saminathan the right for his bid for bail to be heard by the lower court in relation to his detention under Sosma. Section 13 prohibits courts from granting bail for security-related offences.

The DAP lawmaker was one of 12 detained under Sosma and subsequently charged under Section 130J of the Penal Code for supporting defunct Sri Lankan militant group Liberation Tigers of Tamil Eelam, and under Section 130JB for possessing items related to the group.

Judge Mohd Nazlan Ghazali had ruled that Section 13 of Sosma violated the doctrine of separation of powers between the judiciary, the legislature and the executive and, therefore, deemed “unconstitutional”.

Attorney-General Tommy Thomas said in a statement today that Section 13 of Sosma places a detainee “effectively under preventive detention without recourse to court”, similar to the heavily-criticised and repealed Internal Security Act 1960 (ISA).

Thomas, however, acknowledged that the work of the investigative authorities in the case should be lauded and there were no equivalent laws under which the suspects could be alternatively charged with.

“Hence, the charging of the 12 for these offences under the Penal Code should not create controversy, particularly, when there are no equivalent laws under which they can be charged," he said.

“Like in any other case, the burden is on the prosecution to prove beyond reasonable doubt that these accused are guilty."

However, Thomas pointed out that the law removed an accused’s right to apply for bail at the earliest opportunity, “as would have been under most non-Sosma charges”.

“What the drafters of Sosma and the 2012 Parliament that enacted the law did not take into account was that the judicial function of the court is eroded by virtue of Section 13. Consequently, judicial power is undermined,” he said.

“For these reasons, in the exercise of my discretion, I have decided that the public prosecutor will not appeal against the recent decision of the High Court in holding Section 13 of Sosma unconstitutional. Our DPPs will deal with each bail application on its merits and the court will act as an arbiter, as contemplated in the Federal Constitution,” he said.

1. On 29th October 2019, 12 suspects linked to the terrorist group known as the Liberation Tigers of Tamil Eelam (“LTTE”) were charged under Section 130J of the Penal Code for giving support to LTTE through social media to promote the group to the public, as well as under Section 130JB of the Penal Code for having possession of items related to LTTE. The 12 accused were investigated for some time by our investigative agencies entrusted to prevent the outbreak of terror or violence. This is to be lauded. In comparative terms, Malaysia is one of the safest countries in the world, principally because of the masterful vigilance of our security forces, who have an outstanding track record of nipping the threat of violence at a very early stage. Hence, the charging of the 12 accused for these offences under the Penal Code should not create controversy, particularly, when there are no equivalent laws under which they can be charged. Like in any other case, the burden is on the prosecution to prove beyond reasonable doubt in the ordinary way in an open court that these accused are guilty of these offences.

2. Sections 130 and 130J(b) of the Penal Code, under which all of them have been charged, are offences to which the Security Offences (Special Measures) Act 2012 (“SOSMA”) apply. SOSMA provides for special measures in dealing with a suspect from the time of his arrest until an appeal is disposed by the apex courts. But ever since its enactment, SOSMA has been subject to serious criticism from many sectors of society.

3. Perhaps the most pernicious feature of SOSMA is the absolute prohibition in Section 13 of bail from the time of arrest until trial, indeed, even after an acquittal by the trial court pending appeal by prosecution to the apex court. This means that the power of a Court to hear and determine a bail application by an accused before it, which is a daily occurrence in all our courts handling criminal matters, is removed. Likewise, an accused has lost his right to make a bail application at the earliest opportunity, which is his right under most non-SOSMA charges under our criminal jurisdiction.

4. Under our criminal law, whether an accused upon being charged in court can seek bail depends on which of 3 categories his charge belongs to:

(i) bailable offences : these are minor offences for which the court must give bail, unless satisfied that in a particular case it should not be given;

(ii) non-bailable offences : for serious crimes, including murder, rape and kidnapping. In this category, it is for the accused to convince a court to give bail in the circumstances of his case; and

(iii) unbailable offences : this is a small list of cases, including SOSMA, where the court has no power or jurisdiction to hear a bail application. Thus, bail can never be given in this class of cases.

5. It is the third category of offences that we are concerned with for present purposes. It will be noted that for these unbailable offences, the court’s power to hear and determine bail applications is altogether removed. The issue is whether such removal affects “judicial power”, which under the Federal Constitution, vests solely and exclusively in the Judiciary, as the third branch of government.

6. What the drafters of SOSMA and the 2012 Parliament that enacted the law did not take into account was that the judicial function of the Courts is eroded by virtue of Section 13. Consequently, judicial power is undermined.

7. Our constitutional law has made substantial advances since SOSMA was enacted. The Federal Court decisions in Indira Gandhi in 2016 and Semenyih Jaya in 2017 accepted the basic structure doctrine, and more significantly, the fundamental entrenched principle of highest importance, namely, the constitutional duty of the courts – to the exclusion of all other authorities – to judicially decide disputes. That would include contested bail applications.

8. I recognised this new trend in constitutionalism when I applied to the High Court this January for an order to transfer the prosecution’s case of Dato’ Sri Najib Razak in the SRC matter from the Sessions Court to the High Court. Previously, the Public Prosecutor achieved the same result by simply issuing administratively a Certificate of Transfer, thereby, by-passing the Court. Despite vigorous objections by Najib Razak, the High Court granted the order to transfer, which decision was upheld by the appellate courts. It currently represents the law in Malaysia.

9. Justice Nazlan in the High Court recognized the principles in the basic structure doctrine and developed in the Indira Gandhi and Semenyih Jaya cases when holding Section 13 of the SOSMA Act as unconstitutional because that section closes the door to judicial application for bail. Thus access to justice is denied to all accused under SOSMA between charge and their final appeal before the Federal Court. In my opinion, any appeal against the decision of the High Court is doomed to fail.

10. It should be pointed out that the practical effect of Section 13 of SOSMA is that because an accused cannot apply for bail from the time he is charged until his trial (which may take as long as 9 to 12 months) he is effectively under preventive detention without recourse to court: a fate similar to those who were detained under Internal Security Act, 1960. The ISA was severely criticised for decades prior to its repeal in 2012. This is particularly unacceptable because of the fundamental principle underpinning criminal jurisprudence that an accused is innocent until found guilty by a court. Hence, all the SOSMA accused must be presumed innocent until conviction; yet they cannot seek bail from court.

11. Concerns have been expressed whether a court would grant bail to a SOSMA accused who is building a bomb and intends to use it to kill innocent members of the public. In such a case, Malaysians should be assured that once our DPP informs the court (with some credible evidence) that a bail applicant is planning such dastardly and violent acts, bail will be refused. No judge will be irresponsible to place public safety in jeopardy. Ultimately, we must trust the judges to decide in each case when a bail application is made whether to grant or refuse it, and in cases where bail is granted, whether to impose any conditions, including the accused being restricted at his home, wearing a monitoring device, reporting daily to the police or any other conditions that the police / DPP may ask.

12. For these reasons, in the exercise of my discretion, I have decided that the Public Prosecutor will not appeal against the recent decision of the High Court in holding Section 13 of SOSMA unconstitutional. Our DPPs will deal with each bail application on its merits and the Court will act as arbiter, as contemplated in the Federal Constitution.