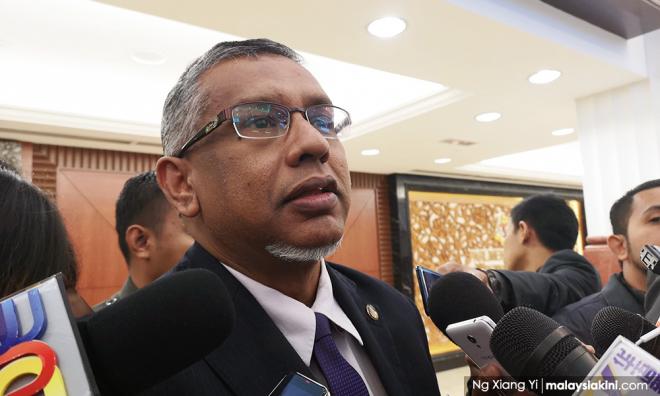 "Sixty-two percent out of 1.7 million are employed in the health and education sectors as well as from the military and police," he said, adding the balance comprised employees from the administration, social services, engineering, economic and science sectors, among others.

"The government opines that the number of posts can be reduced without affecting service delivery and source of income of the relevant offices," Hanipa (above) said.

"As such, the government eyes a reduction of five percent in posts gradually until 2021," said Hanipa.

This will reduce the number of those employed to 1.61 million from 1.7 million. In other words, the government is not reducing the number of staff which currently stands at 1.57 million staff.

In January 2017, then Finance Minister II Johari Abdul Ghani said Malaysia had the most bloated civil service in the world, with one civil servant for every 19.37 people in Malaysia.

In his reply, Hanipa said the current policy adopted to control the size of the public service was in line with the latest economic status and technology developments.

The government had adopted several methods, including a study on the overlapping of functions among the government entities, rationalisation of employment and optimising human resources as well as outsourcing and alternative service deliveries and privatisation.

The government only hires when the need arises, according to Hanipa.

"We opine that the public service should focus on drafting major policies, determining the course and service delivery," he said.

Hanipa added the government had successfully lifted its financial burden in 1983 via the privatisation policy.

He said there was potential to privatise certain functions of government entities which, in turn, could obtain revenue consistently and in a self-sufficient manner.

He said the government would also create more lucrative jobs in the private sector in order to reduce the dependence of the people on employment in the public sector.