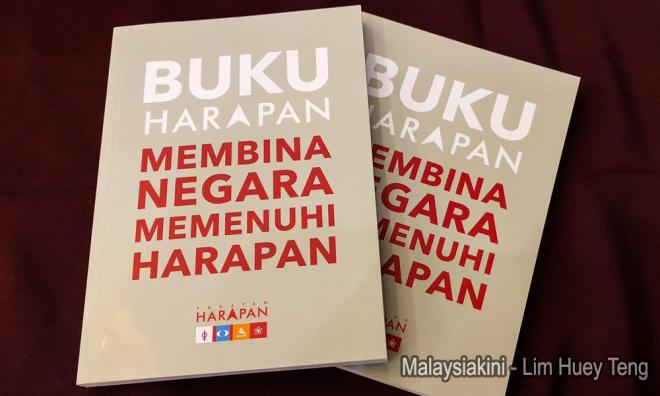 Use 'Buku Harapan' as compass to reset nation-building policies

MP SPEAKS | We want the Pakatan Harapan government to succeed to reset nation-building policies for Malaysia to return to the founding principles of the Malaysian constitution to ensure unity, justice, freedom, excellence and integrity in Malaysia where there is the separation of powers, the rule of law, public integrity and respect for human rights.

For six decades, we have strayed from the fundamental principles of the Malaysian constitution. The re-setting of nation-building principles to restore the original constitution principles is an arduous process and will probably take a generation, but substantial efforts must be made in the five years before the next general election in 2023.

Buku Harapan must be the compass to reset nation-building policies to return to the founding principles of the Malaysian constitution to ensure unity, justice, freedom, excellence and integrity in Malaysia.

I have been quoted as saying that Pakatan Harapan had made “impossible promises” in the run-up to the 14th general election. Nothing could be further from the truth.

What I said at the Perak state convention last month was that we must be frank with the people and that if we had made “impossible” promises, we must have the confidence in the people’s trust to admit them.

Nineteen months have passed since the historic May 9 decision of last year, bringing about a peaceful and democratic transition of power for the first time in six decades.

The high hopes that there could be radical change overnight had been replaced by disappointment and even disillusionment with the slow pace of change, and there is even perception that the Harapan government has relapsed to the sins and crimes of unaccountability, abuses of power and corruption of the previous administration.

Harapan parties must guard against any such relapses, and firm remedial action is needed to ensure that the sins and crimes of the past, viz unaccountability, abuses of power and corruption, do not occur in the Harapan administration.

I look forward to the Transparency International Corruption Perception Index 2019 which should be released next month, for this will be one international measure whether we are making progress in the fight against corruption. I expect that this will be a TI CPI Report which Malaysians can feel proud.

It is vital and important that Harapan parties must be able to convince our members and core supporters that the trajectory towards a "New Malaysia" is on track and that the five pillar-promises towards the building of a New Malaysia, as contained in the 14GE Harapan election manifesto remain our lodestar and guiding principle.

The five pillar-promises of a New Malaysia are:

Three recent events are salutary reminders that we are on track on this trajectory towards a New Malaysia, firstly, the constitutional amendment bill on the two-term limit of the prime minister; and the two decisions by the attorney-general Tommy Thomas today not to appeal against the court decision on the acquittal of PKR vice-president Rafizi Ramli in the National Feedlot Corporation (NFC) Banking and Financial Institutions Act 1989 (Bafia) case and the Kuala Lumpur High Court decision that Section 13 of the Security Offences (Special Measures) Act 2012 (Sosma) denying bail to Sosma detainees as “unconstitutional”.

The two decisions by the attorney-general Tommy Thomas on Rafizi and Sosma are most welcome and appropriate.

We must be mindful of increasing public impatience at the pace of change to keep in line with the promises in Buku Harapan.

Only today, the Malaysian Bar president Abdul Fareed Abdul Gafoor reminded the Harapan government to remain faithful to its 14th general election manifesto promises on human rights and to implement them without delay.

In his anniversary speech on the first year of Harapan government in May this year, the prime minister, Dr Mahathir Mohamad expressed confidence that the Harapan government will be able to implement its Buku Harapan promises in its remaining term as the government.

In the new year of 2020, let the Harapan government step up on its implementation of the promises it had made in Buku Harapan.

LIM KIT SIANG is MP for Iskandar Puteri. The above was his speech at the DAP Kinrara anniversary dinner in Kinrara, Selangor yesterday.