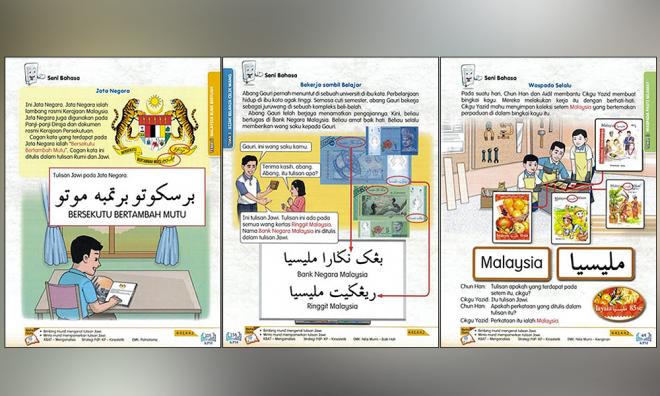 Since July, critics have vehemently opposed the government's plan to introduce three pages of Jawi lessons in the Bahasa Malaysia syllabus for Year 4 students, including those in vernacular schools.

Those opposing have, among others, cited concerns about creeping Islamisation while the government has conversely maintained that is not the intention.

Throughout this tussle, for the public, the exact nature of the Jawi lessons has been left to the imagination.

Last week, the Education Ministry finalised the content of the three-page lesson, which Malaysiakini is publishing here.

The content focuses on Jawi text on the national coat of arms, Malaysian ringgit and stamps.

In all, there are four Jawi texts that read: "Bersekutu Bertambah Mutu" in the coat of arms, "Bank Negara Malaysia" and "Ringgit Malaysia" on ringgit notes and "Malaysia" on stamps.

Teachers are asked to guide students in identifying the Jawi text and to present them.

The pages were previously shown to stakeholders as early as August but was never made public.

At that time, the Education Ministry told the stakeholders that the pages could still be subject to change.

The academic content is expected to be introduced beginning next year.

In a bid to address discontent among critics, the Education Ministry had said that Parent-Teacher Association would be allowed to decide whether children would be taught about the three pages.

However, with the deadline for implementation approaching, there is renewed pushback.

An action group against the implementation has said it plans to take the government to court over the three-page lessons.

The United Chinese School Committees' Association of Malaysia (Dong Zong) will also be organising a gathering of Chinese groups on Dec 28.