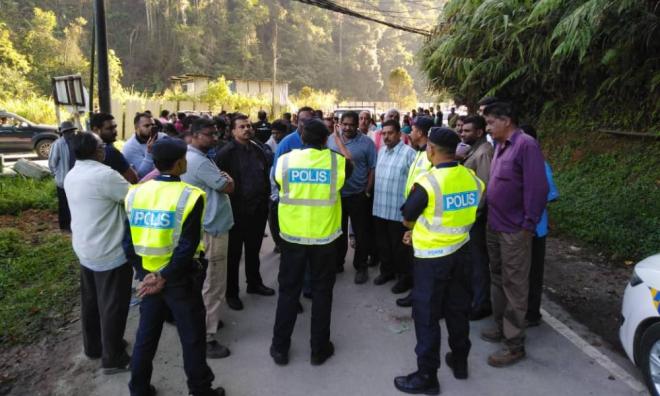 BN’s treachery cause of demolition of farms in Cameron Highlands

ADUN SPEAKS | Early this morning the enforcement units of the Pahang state government moved in to demolish the rest of the farms numbering about 60 situated along Sungei Ichat, in Kuala Terla, Cameron Highlands.

In April 2019, the state government demolished about 15 farms mainly belonging to the Chinese farmers before protests stopped the demolition.

In the immediate aftermath of the demolition, the farmers obtained a court injunction to prevent further destruction of the farms.

However, on Sept 30 this year, the court injunction was withdrawn by the farmers after being convinced by the MIC that the menteri besar was willing to resolve their problems by giving an alternative site.

The gullible farmers, convinced the MIC had good intentions in resolving their problems, withdrew the court injunction in Kuantan.

The withdrawal of the injunction rather than resolving their problem, actually paved the way for the destruction of the farms.

The reason that was given for the demolition of the farms was the issue of water pollution in Sungai Ichat where the farms were located.

However, not far from here is Sungai Terla which supplies water to the residents in Cameron Highlands.

It is not Sungai Ichat that is polluted but Sungai Terla. This has been pointed out to the state government many times.

But why the state government took more interest in demolishing the farms located near Sungai Ichat that were not the cause of water pollution remains a mystery.

To date, the state government has not taken the initiative to address the real cause of the water pollution of Sungai Terla.

In the upstream where some illegal farms are located no action has been forthcoming, even though these settlements are one of the causes of water pollution.

If the farms located near a Sungai Ichat were not the real cause of pollution, why action was taken against them.

The farms were not illegal in the sense they had been given temporary occupation licenses for the past 60 years or so.

Political calculation on the part of the Pahang's BN state government cannot be overruled.

Most of the farms were owned by supporters of the Pakatan Harapan government in general and DAP in particular.

As long as the injunction was imposed, the state government could not move on this matter. There was a fear that if the matter goes for trial, it was not certain that the state could triumph on the matter.

The farmers having invested and worked in the farms on the basis of temporary licenses had a case to look forward to.

But the state government lacking the elementary honesty and decency decided to use more deceptive ways to nullify the injunction.

The MIC having miserably lost its seat in Cameron Highlands sought a nefarious comeback of a sort by working closely with the state government.

Afraid that the involvement of Harapan leaders might further complicate the matter, succeeded in convincing the farmers or the plaintiffs to withdraw the injunction in favour of settlement with the state government.

But what transpired was not an amicable settlement by way of an alternative farming site but demolition and expulsion of the farmers.

Both the Pahang government and the MIC misled and betrayed the farmers without any redeemable prospect of a new alternative.

The federal government which refused the services of the police and armed forces for the demolition exercise earlier succumbed to the request of the state government.

I am not sure why the earlier decision was rescinded.

Treachery and betrayal are not uncommon for the BN or its component the MIC, the supposed representative of Indians in the country.

The case of the demolition of the 60 farms illustrates beyond reasonable doubt how treachery was used to deceive and exploit the farmers.

If the injunction had been in place, at least the farmers could have gone for a lengthy trial with at least a prospect of material gains.

The MIC spoilt it by accommodating closely with Umno and the Pahang government.

I would have hoped that the MIC and BN might have done something useful for the farmers especially both are in their twilight years.

MIC members resigning as a result of the demolition by those holding positions in the Pahang state is just an act to deceive the Indian community further.