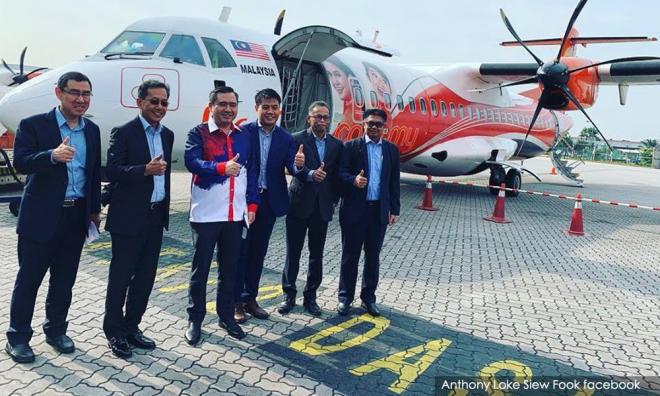 The year saw the country’s aviation sector square up to a string of challenges such as overcapacity in the region, rising cost, air-safety rating downgrade, airport system malfunction coupled with slower economic growth and volatile foreign exchange rate.

Flag carrier Malaysia Airlines Bhd (MAB) remained in the spotlight as it continued to bleed.

What followed was a decision to sell MAB.

To date, none of the offers have been attractive enough.

On a positive note, MAB and Japan Airlines were granted approvals for a joint business agreement on Dec 19, which would allow the two carriers to cooperate commercially on flights between Malaysia and Japan and provide additional flight choices and a larger network for their customers.

MAB also signed a codeshare agreement with Turkish Airlines to tap into each other’s market.

Besides MAB, AirAsia Group Bhd and AirAsia X Bhd are the other two big names in the industry.

AirAsia has expanded its international network to several new routes including Can Tho and Da Lat in Vietnam and Belitung in Indonesia, while AirAsia X has started flights to Okinawa Naha, Fukuoka and Narita in Japan.

AirAsia also upsized its future Airbus single-aisle fleet by converting 253 orders for the A320neo to the larger A321neo, and widened its non-ancillary portfolio by upgrading its onboard WiFi service, as well as opening its Santan and T&CO restaurant in Kuala Lumpur.

As margins remained squeezed in the industry due to rising cost and over-capacity, low-cost carriers such as AirAsia have continuously crafted other paths to boost revenue and income.

On the operations side, a network failure which triggered a system outage at the KL International Airport (KLIA) and klia2 on Aug 21 was unprecedented.

Thousands of passengers were stranded and flights delayed for four days.

The airport operator later lodged a police report suspecting an act of malicious intent, and the case is currently being investigated under Section 427 of the Penal Code for mischief.

In terms of passenger traffic, MAHB’s operations grew 5.9 percent to 78 million between January and September, with KLIA recording a 3.3 percent rise in traffic to 46.2 million, while other local airports recorded an aggregate growth of 10 percent to 31.8 million passengers.

The full-year number is likely to be better as the fourth is seasonally the strongest quarter.

Passenger traffic across all airports in Malaysia is projected to grow by five to six percent next year, driven by Visit Malaysia 2020 and a 3.2 percent year-on-year increase in domestic seat capacity growth.

This would bring the total traffic between 114.9 million and 116.0 million passengers.

The other major issues were the reduction in passenger service charge (PSC) rate, the Civil Aviation Authority of Malaysia’s (CAAM) safety rating downgrade, the integration of the Malaysian Aviation Commission (Mavcom) and CAAM, as well as Mavcom’s new Regulatory Asset Base (RAB) framework.

On Aug 30, Transport Minister Anthony Loke confirmed that the cabinet had agreed to lower the PSC to RM50 from RM73 nationwide, with the exception of those departing from the main terminal of KLIA.

He said the downward revision was taken to reduce the tax burden in light of the new levy tax under the Departure Levy Act 2019 which came into place on Sept 2. As for domestic and Asean flights at all airports, the PSC rate remains unchanged at RM35 and RM11 respectively.

The decision brought cheers to the airline companies.

While that was solved, the US Federal Aviation Administration’s (FAA) move to downgrade Malaysia to Category 2 on safety concerns, which could result in Malaysia’s carriers not being able to open new routes to the country, was a rude wake-up call on the need to rectify things.

CAAM admitted the US FAA has downgraded Malaysia's air safety rating due to its shortcomings as an aviation regulator, after an FAA review on CAAM was carried out in April 2019.

The transport minister stepped in and said the government was putting together a team of local and foreign experts to help CAAM regain its Category 1 aviation regulator status.

Loke also announced the integration of CAAM and Mavcom.

He said it was made in the best interest of the aviation industry as the integration would empower CAAM financially as the industry’s main regulator.

The decision, however, drew flak especially from the Consumers’ Association of Penang (CAP), which said that Mavcom had played its role in taking care of aviation consumers’ welfare.

It was also reported that the International Air Transport Association (IATA) regional vice-president Asia Pacific, Conrad Clifford (below), had urged the Transport Ministry to reconsider the decision to dissolve Mavcom, saying the independence of economic regulation within CAAM needs to be ensured.

Clifford said the merger of the two civil aviation regulators could jeopardise the efficiency and effectiveness hitherto achieved by Mavcom as an independent regulator.

This brings the question of who would now be in charge of the new RAB framework that is slated for implementation come Jan 1.

RAB is aimed at making aeronautical charges more transparent and airport operators more accountable while ensuring MAHB is remunerated for the development of its assets.

It was reported that Mavcom would likely maintain the pre-tax weighted average cost of capital (WACC) at 10.88 percent in the RAB framework, thus providing certainty in the industry.

It also indicated that the WACC for the 2020-2022 framework would have a lower capital expenditure of RM3.99 billion from RM5 billion proposed in the Second Consultation Paper published on June 18.

The bulk, estimated at 70-80 percent, is earmarked for KLIA, mainly for aerotrain replacement, baggage handling system replacement, terminal optimisation and pavement repairs, as well as for klia2.

On the global front, aircraft manufacturer Boeing has temporarily suspended the production of its 737 Max, the model that was involved in two tragedies — the Ethiopian Airlines plane that crashed near the town of Bishoftu six minutes after takeoff, and the Lion Air jet that went down in Indonesia — costing a total of 346 lives.

Malaysia immediately banned all Boeing 737 Max flights into and out of the country.

MAB, which has ordered 25 737 Max aircraft from Boeing with another 25 purchase rights in a deal valued at US$5.5 billion (RM23 billion), is reviewing the deal and seeking more technical details from the latter. — Bernama