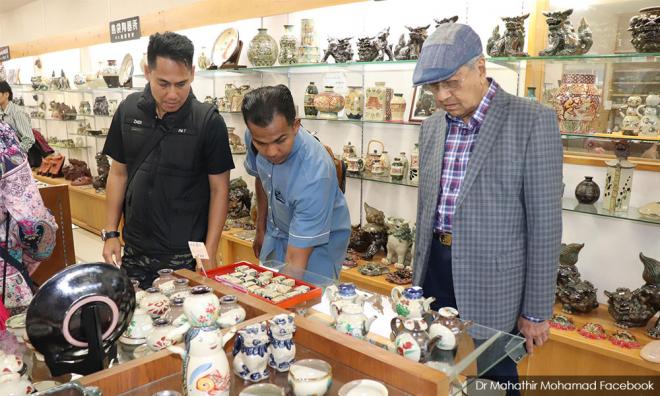 PM wonders if Okinawa village shops will work in M'sia

Three months after the May 9 general election in 2018, the prime minister was quoted as stating that the Pakatan Harapan government aspired to emulate Japan in creating a nation with excellence.

In his blog posting today, Mahathir once again looked towards the Land of the Rising Sun for inspiration. But this time, he limited his focus to village shops which existed on the island of Okinawa.

He wondered if such an enterprise would be feasible in Malaysia.

“Okinawa is a long-thin island 100km from north to south. In the old days, the people in the south found difficulty in getting supplies from the north.

“The people in the villages decided to have a shop stocked with their needs. They collected money from their village and built a shop.

“They employed a man from the village to manage the shop. Money was provided by the villagers to stock the shop with their needs brought in from the north,” he added.

The villagers, he said, bought their needs but did not pay for the goods immediately.

“At the end of the month, they would total up all their purchases written on their paper and pay the amount due. The money was kept in a safe.

“Later when business was not so good they put up a table and a few chairs and started selling drinks and coffee,” he added.

Mahathir said every village would have this commonly owned village shop.

“It was a kind of cooperative, owned and operated by the villagers.

“Today most of them have disappeared as access to their needs became easier due to better road, motorcycles and cars. The one I visited is one of the few left.

“It worked well in Okinawa. Wonder if it will work well in Malaysia?” he added.

Previously, Mahathir had said Malaysian youths would prove to be an obstacle with regard to emulating Japan.

“Many of our youths are not interested to learn and work and are more interested in becoming mat rempit and carry out unconstructive activities.

"We have to settle this problem," he rued.