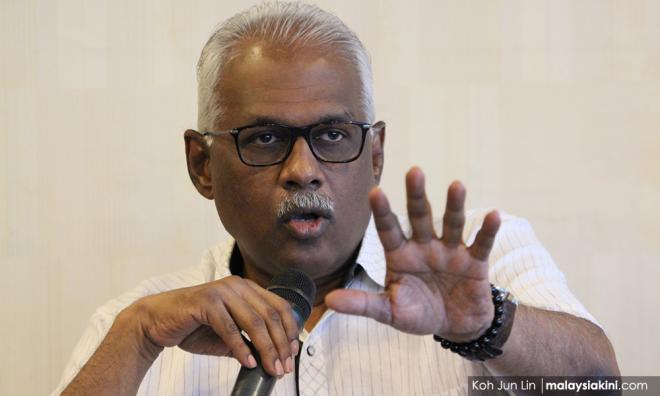 Klang MP Charles Santiago has urged Universiti Malaysia Perlis (UniMAP) to sack its vice-chancellor R Badlishah Ahmad and the examination panel for allowing an exam question which has courted controversy.

In a statement today, Santiago said it was ironic that Question 60 of UniMAP's ethnic relations paper caused more divisions in society.

Question 60 of the "Ethnic Relations" module examination paper had courted controversy as the multiple-choice answers had suggested that critics of preacher Zakir Naik were ignorant.

"The vice-chancellor shouldn’t be holding the position anymore because learning institutions must propagate unity and not division.

"The panel that vetted these questions must also be held responsible.

"The VC should have apologised. Instead, Badlishah (above) has shown his arrogance at the expense of further division in society. This is dangerous. The university must, therefore, sack Badlishah and the panel that allowed for these questions.

"The university’s accreditation must also be reviewed and if necessary, withdrawn," he said.

Badlishah had announced yesterday that UniMAP's investigation on the controversial examination paper had found nothing wrong, while adding that the paper was vetted by a multi-ethnic panel.

Last week, photographs of several controversial questions appearing in the examination paper began circulating on the internet, most prominently Question 60.

Question 60 reads: "Zakir Naik is one of the icons of the Islamic world, he is very active in spreading true Islam and following the Quran and Sunnah of Rasulullah SAW. He is able to reason and to answer every question that is asked to him. However, in Malaysia, he is no longer allowed to deliver his preaching. In your opinion, as a Malaysian, why does this happen?"

Zakir is a fugitive in his home country of India where he is wanted for money laundering and other charges.

His preaching methods have courted controversy across the globe. He is banned from entering the United Kingdom, Canada and Bangladesh.

He was granted permanent residency by the BN-administration. After several speaking engagements in Malaysia courted controversy last year, the police have said they will no longer allow him to speak.

Prime Minister Dr Mahathir Mohamad said his administration was attempting to relocate Zakir, but other countries are not interested in accepting him.

In a separate statement, Bagan Dalam state assemblyperson Satees Muniandy (below) said UniMAP was abusing its autonomy by allowing the controversial question in its examination paper.

Satees said that Question 60 had clearly attempted to ridicule critics of Zakir Naik and was a form of indoctrination, rather than education, as the multiple-choice answers to the question suggested that the critics were "ignorant".

"If that is the academic standard of Malaysian Universities, Malaysians will have to worry for future of Malaysia," he said.

Satees also flayed Badlishah for claiming that Question 60 was not problematic and vetted by an multi-ethnic panel.

"Can we know, who were the members of the 'multi-ethnic panel' that approved the question as 'question meant to test the maturity of students'?" asked Satees.