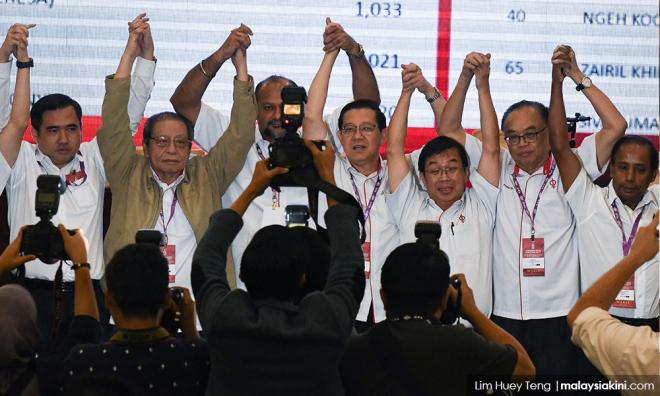 Yoursay: An open letter to DAP

YOURSAY | 'If protest does not work, DAP must cross the Rubicon and burn the boats.'

Vijay47: You are hopelessly wrong, DAP supremo Lim Kit Siang. In fact, you flatter yourself by referring to present weather conditions as a “winter of despair”, suggesting a temporary discomfort soon to melt.

On the contrary, we are now experiencing the return of the Ice Age, complete with sabre-tooth tigers, woolly mammoths and dinosaurs. And this is the environment of your own making, or rather, unmaking. So spare us the pink platitudes you have taken to excel in of late.

You ask "But who is creating all these threats?” and very tellingly, you propose no answer. If you chose to pluck your head out of the sand it is deeply buried in, you will discover that the villain is close, much closer than you care to admit.

The sappy pretentious lines you write is testimony to the failure you have achieved for all of us - a refusal to face facts and take the bull by the horns.

What were you, DAP, and the other parties of Pakatan Harapan doing while Prime Minister Dr Mahathir Mohamad was running riot, doing the "Malay thing"?

We can readily overlook the occasional transgression but Mahathir has been consistent in his villainy, from his attendance and performance at the shameful Malay Dignity Congress, his sentiment towards Dong Zong accompanied, unbelievably, by the prime minister of this multiracial country subtly inciting the Malays to take to the streets.

What were you doing while education was being pawned, even destroyed, for racial dominance when institutions of learning were going berserk with offensive stands against non-Malays?

Anyone would concede that in any coalition there will be moments of disagreement. To a degree. But when one party carries out incessant subjugation, the others must protest.

If the protest does not work, DAP must cross the Rubicon and burn the boats. After all, what can DAP, and we, lose? There cannot be much of a “spring of hope” in a barren desert of sand or ice.

Proarte: Lim would do well to say that he is directing his views towards Harapan politicians who are busy playing politics for self-serving reasons.

They are totally ignoring the Harapan manifesto, which is the prospectus that inspired the rakyat to vote them in office. The rakyat are increasingly viewing Mahathir and his below-par cabinet as confidence tricksters.

Malaysia's problems are systemic, which allow the ruling elites to ride roughshod over the electorate. We need to rehabilitate the whole system of governance in Malaysia. This is what the manifesto outlined and we expect Harapan to honour the 'contract'.

Harapan politicians are behaving like BN politicians and in some cases even worse. Underperformers should be sacked and not allowed to be candidates for future elections. The gravy train has to stop.

James Wong Joon Min: Lim, it seems to me and many thinking Malaysians that you are still caught in a time warp in the past, when you were in opposition.

The Jawi issue is just one of the so many other issues which indicate that leaders from your party and other Harapan component parties are just too preoccupied with protecting the newfound perks and privilege that come with ministerial portfolios and government-linked company (GLC) appointments.

For decades, you had been an outspoken proponent of reform for the Senate. You had eloquently argued that the Senate had been a dumping ground for political rejects and cronies appointed by the corrupt and kleptocratic regime of Umno/BN

Why was there pin-drop silence from your party when your daughter (Penang DAP secretary Lim Hui Ying) and your lieutenant from Johor, Liew Chin Tong, were appointed into the Senate after GE14?

The education system in this country is in a state of shame and desperately in need of reform. The former minister seems to be more interested in the colour of school shoes, swimming lessons and free breakfast.

What about the economy? Some 19 months on, there is no sign of the Harapan government, of which you are a part, of implementing needs-based policies to make the economy more competitive.

As far as Sarawak is concerned, Lim, how long do we need to persevere with your government for Sarawakians to receive 20 percent royalties from our oil and gas, as promised by your government more than 19 months ago?

Lim, Malaysians are now faced with a dilemma. Come GE15, the thought of voting the incompetent, corrupt and religious bigots from Umno-BN/PAS back into power would send a chill down the spine of millions of Malaysians.

Lim, it's time to stop the rhetoric. Perhaps it's time DAP should leave the coalition.

Vgeorgemy: Some of us won’t be here by the next decade. The coming decade will be the last decade for us to involve in the nation’s well-being productively.

China will become an importing nation to achieve the next level of standard of living beyond the current subsistence living. The air and sea connectivity to/from China will continue to produce wealth exponentially.

An importing China will be a boon for our economy as the major portion of imports would be daily high-quality goods and services that include green energy and natural gas. We have the necessary knowledge and infrastructure to meet that need.

India will continue to be a vibrant democracy but noisy sometimes. They also have enjoyed the increase in the standard of living since the 1991 opening up of the economy. India will also be looking towards Southeast Asia for its need to feed 1.2 billion people.

Malaysia is positioned strategically to participate in the growth of China and India for our next level of prosperity to increase the population’s earning capacity.

The young population will have no issues in participating in the economic activities in the region but we, the older generation, have so much baggage as not to feel good about the economic advancement in the region by Indonesia, Vietnam, Cambodia, Thailand and Singapore.

Indeed, Asean countries have never enjoyed such a long peace and economic development. In the coming decade, they will be moving from subsistence agricultural economies to vibrant trading economies resulting in much prosperity never seen in the region.