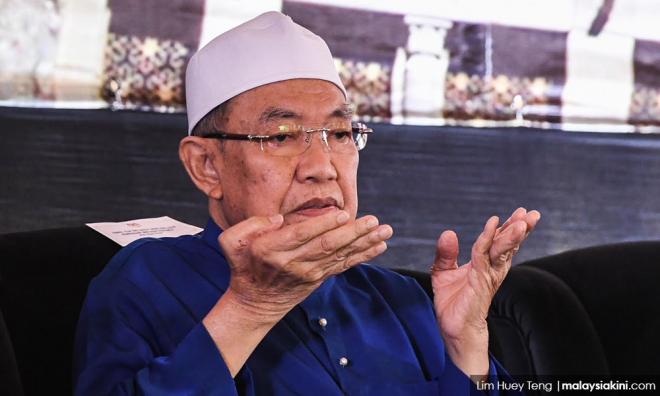 Yoursay: When muftis jump into the Jawi fray

YOURSAY | 'I just love (not) how men of faith, decide to use and abuse the Constitution when it suits them.'

Harry Mou: Perak mufti Harussani Zakaria, can you answer these questions: If Bahasa Malaysia cannot unite the races, how could Jawi do the trick?

And if the Malays feel so strongly about it, why was Jawi not learned and used widely by the Malays themselves since Merdeka? Why is that they want to do it now?

Hypocrisy? A hidden agenda to split the races?

Newday: I just love (not) how men of faith, decide to use and abuse the Federal Constitution when it suits them.

This especially happens when they are pushing for religious laws to be the way, instead of our secular Constitution. It is hypocritical, to say the least.

OceanMaster: The pragmatic government leadership in the 1960s saw the opportunity to move ahead with education with romanised Bahasa Malaysia, which also rhymes with the English language.

Jawi took another hard hit when Utusan Malaysia, which once used the script in its publication, had to switch as there was not enough demand. This means even the newer generation of Malays do not see the value of Jawi in the real world.

The concern now for the non-Malays is the lack of sincerity of the whole episode. So, the muftis suddenly becoming vocal is only aggravating the situation.

Fernz: Khat, or Islamic calligraphy, should be confined to Muslim students.

Jawi, based on Farsi and Arabic, replaced the Indian script originally used as the lingua franca of the Malay archipelago.

Under Article 152 of the Federal Constitution, Rumi is the official script for bahasa kebangsaan (national language).

Vgeorgemy: Harussani is deliberately misleading the nation on the provision of the characteristics of the national language.

Article 152 of the Federal Constitution clearly states that Malay Rumi scripts shall be the national language and no one restricts the usage of Jawi scripts if anyone decides to use it in their course of communication.

The same provision is seen in the practice of religion, such as other religious beliefs also existed along with Islam.

The Wakandan: Nobody is questioning the right to use Jawi. You can use it, study it until you are satisfied, but just don’t force it on anyone.

Many people just feel that learning Jawi is an unnecessary burden to their children who can learn another beneficial language, like English.

As for Jawi, by all means teach it in schools, but only as an optional subject. Those who are proficient in BM in the Rumi script are no less knowledgeable without Jawi, and that’s the most important thing.

Anonymous 770241447347646: Is not the future of the students the first priority? Isn't it the right way is to introduce the best quality education with the right syllabus?

What future benefits would Jawi bring to the students in the vernacular schools? Academically or in future careers?

David Dass: We are already struggling to raise and maintain the standards of the English language in the country.

China, Singapore, Japan, Taiwan and Hong Kong now boast the highest standards for Maths and Science in schools in the world. Vietnam is already ahead of us.

Indeed, what is the rationale for introducing the Jawi script?

Vijay47: Harussani, your concern for the firm application of the law is admirable.

So what do you propose should be done to a religious leader who almost causes a riot by falsely charging that a church in Ipoh was converting Muslims to Christianity in 2006?

Under Christian precepts, he may be forgiven, under Muslim law his tongue should be amputated. Which would you prefer?

Dswami: Indeed, this mufti should have been charged a long time ago under the Sedition Act for incitement.

In 2006, he had circulated a text message claiming that a group of Muslims was going to be baptised at the Our Lady of Lourdes Church in Silibin, Ipoh.

Norman Fernandez: In 1966, the Umno-BN decided to abolish the teaching and learning of Jawi in schools.

So mufti, what was your stand then? Did you accuse the Umno-BN of going against the Sedition Act? Where were you then, Harussani?

Anonymous_1545691035: This is the mufti that said a Muslim woman has “no right” to reject her husband’s demand for sexual intercourse, even when they riding a camel.

He was quoted saying there is no such thing as rape in marriage and this was made up by Westerners.

How can we listen to this kind of a mufti on other issues, especially on education?