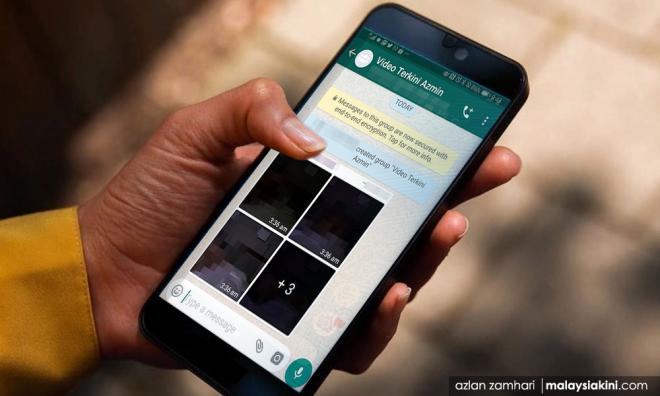 Yoursay: Sex tape sleuths should have their eyes checked

YOURSAY | ‘It is as if this case hangs entirely on the identification of the actors in the video by experts.’

Kim Quek: Attorney-general Tommy Thomas must have spent many painful hours to come with this poorly disguised cover-up statement to justify the unjustifiable.

I believe this case has equally tormented inspector-general of police (IGP) Abdul Hamid Bador, who had to shuffle the police investigation papers eight times back and forth between the police and Attorney-General’s Chambers (AGC), hoping to avoid the shame of having to announce such an ignominious conclusion.

At the end, the autocrat won and our leading law enforcers have to eat humble pie, while the rule of law is flushed further down the gutters, driving aspirants of the New Malaysia to further despair.

If the faces of both Economic Affairs Minister Azmin Ali and alleged partner Haziq Abdullah Abdul Aziz are truly not recognisable and this is the AG’s sole criterion to dismiss the case, then why drag it for seven months when such a conclusion could be reached in a matter of days?

Why was the hotel CCTV confiscated by the police? What have the police found in the CCTV? Would the police agree to a third party viewing it?

Why was Haziq’s confession completely ignored? Why were the many suspects arrested for making and/or circulating this video set free with no further mention of them when we have the technology and resources to nail them?

A final test on this self-professed reformist government - would it agree to an independent panel to ascertain the facts relating to this scandal?

Rupert16: Investigations into criminal or wrongful activities have never been based on facial recognition alone. If this is indeed the case, then our prisons will have a lot of empty cells.

So, is the need for conclusive facial recognition the sole criterion now before anyone can be charged for wrongdoings, Mr AG?

The Third Man: Objectively speaking, isn't the sworn statement of Haziq adequate proof of his partner's identity? Do you need him to identify special birthmarks that only he will know of the other to prove guilt?

Why would a young man purposely implicate himself in such a public way, knowing full well his career and future can be jeopardised and his family exposed to ridicule and shame? It just doesn’t make sense.

Who are the US forensic experts? Given the technical prowess of today's cutting-edge technology, even very old photos or films can be reconstituted clearly.

The Wakandan: Frankly, the AG’s decision is a disappointment. It is as if this case hangs entirely on the identification of the actors in the video by experts.

Perhaps the people in the AGC has to be smarter, more resourceful, to prosecute this case given the confession by Hafiq, which was very specific and moreover, they have the video to assist them. To just dismiss it is like giving an impression that they are hapless and don’t know how to move on with the case.

Besides, isn’t it the role of the judge to decide whether the accused is guilty or not?

Fortis Est Veritas: Indeed, Tommy Thomas is a big disappointment. The sodomy charges preferred against PKR leader Anwar Ibrahim were made on the basis of evidence which would not even impose upon a born fool. In the case of the Azmin-Haziq scandal however, there is much more evidence.

It is 'outsiders' selling their souls for the perquisites attendant upon the position they hold who facilitate the flourishing of the deep state.

Ferdtan: What else can AG and police say when they know the ugly truth which they cannot, and afraid to, reveal?

At the same time, they (AG and police) do not want to go to the extreme of lying for Azmin/Prime Minister Dr Mahathir Mohamad, so the best way out is to act dumb by saying the obvious - cannot identify the culprit.

Problem solved for the accused but reputation lost for both AG and IGP. Serve them right for having no guts.

He is following the law and you need strong evidence to initiate a court case. He didn't say it was not Azmin.

If it is really him, you have to blame the person recording it. With today technical abilities, why so blur? Otherwise, it is only a political assignation. Period.

Evin K: Forget Azmin, maybe his identity remains uncertain and that’s fine, but Haziq admitted that it was him in the video.

Sodomy, although should no longer be considered a crime in this time and age, is still unfortunately a crime in Malaysia.

Kwong: Poor Haziq. Now he is wondering who was it he actually slept with on that day in Sandakan.

Vent: It is difficult to even know what to think now, leave alone whom to look up to in the quest for justice.

But surely if it has been purveyed to the Royal Malaysian Police (PDRM) and the AGC that there are/were “relatively few numbers of video frames in which the suspect is clearly visible”, isn’t the logical corollary of that submission that there was at least one, if not a few more, in which “the suspect” was visible enough to identify him?

In this day and age of cutting-edge forensics in criminology, it beggars belief that the identity of the suspect couldn’t be established notwithstanding the great probability that the video was deliberately “blurred’ as it was also meant in all probability to be a political hit job.

It is equally bizarre that so much effort and expense has been expended on merely trying to identify who was sleeping with whom! Frankly, I don’t give a damn even if I despise Azmin.

Hang Babeuf: Again, as others have remarked: "What a joke! They could not even identify Haziq who confessed?"

Was that too hard to do? Too difficult a step for them to take? So why?

Ruslan Bahari: So, there it is. Abuse of power is never the domain of a race or a tribe. Its human psychology. Everybody who saw the video knows what they saw.

The AG saw it too. He investigated it. And to our disbelief, he decides that there's nothing to prosecute.

Tommy Thomas is human. He too is subject to the whims of his masters if he is indeed under their control. Just as we were aghast at how the tapped conversations showed one or two AGs bending backwards to the then prime minister, we should be here too.

And if and when the former ruling coalition comes back to power, the new AG will be the same; just as Anwar was pardoned, former prime minister Najib Abdul Razak - if he was in jail - will be too; the MACC boss too will sing similar tunes to his masters.

If it isn't clear yet, our country is absolutely driven by politicians and their games. We're just pawns. But pawns are powerful too. As Japanese philosopher Daisaku Ikeda said: “We are not merely passive pawns of historical forces; nor are we victims of the past. We can shape and direct history.”

How we shape and direct history is what matters. In May 2018, we did it. The pawns got their win. But it seems hollow now.

We can win again. Maybe not with BN or Harapan, but we surely can.

yoursay
azmin ali
haziq abdullah abdul aziz
sex videos
tommy thomas
Related Reports
Azmin feels vindicated after 'light of truth prevails over darkness of evil'
a year ago
'Can I advise you something' on sex videos? Najib to authorities
a year ago
Sex videos: Identities unclear, so no prosecution, says AG
a year ago
'Blurry' sex tapes again thwart facial ID bid, and 9 news from yesterday
a year ago