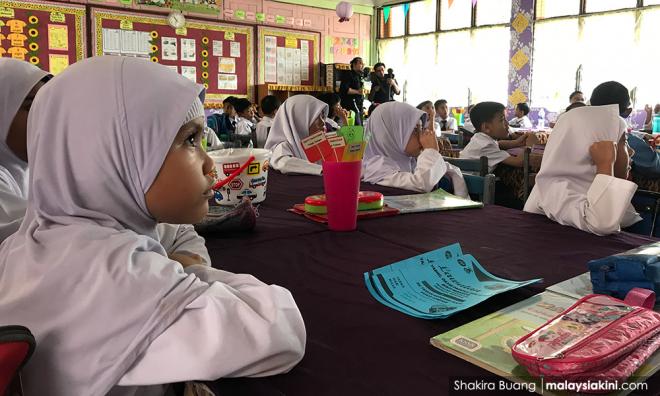 Quo Vadis: The circular (calling Ponggal “haram” for Muslim students to participate in celebration of) is to assuage the anxiety of parents? Utter rubbish.

There was no previous need to reiterate these guidelines. From where did the need emerge? First it was Chinese New Year decorations in a school, now it’s Ponggal.

Why the circular in the first place? Why the word "haram"? Why the need to publish the so-called prohibitive guidelines on the basis of supposition?

Is it any wonder the state of education in the country is what it is today?

A ministry or an agency should understand this fact and that too in a multiracial society.

I am a Muslim and I have many friends from different religions. Islam is a beautiful and tolerant religion. Don’t tarnish it.

I am ashamed of the Education Ministry deputy director-general (Adzman Talib) and Department of Islamic Development (Jakim) for being ignorant of such festivals and projecting the wrong image of Islam.

I propose Jakim be dissolved and the deputy DG transferred or sent for a course.

Jakim should promote the goodness of Islam and you will get non-Muslims to appreciate the religion.

Mazilamani: Don't give us that rubbish of an explanation. Why must you forewarn or advise parents? Don't parents already know how to advise their children on what events they can and cannot participate in?

The Education Ministry was acting patronisingly. Let the parents and teachers decide what is good for children to know and allow them to exchange knowledge about cultural differences. Don't pretend to be surrogate parents.

We visit other countries to gain first-hand knowledge of how they do things differently. As visitors, we respect the differences and don't question them.

Why can't we apply the same in our own country? Accept things as they are. You don't have to incite problems if you don't like something.

I pray Prime Minister Dr Mahathir Mohamad (who is acting education minister) cleans up the Education Ministry and schools of fanatics and bigots.

Annonnymous 080: Why was there a need to issue such a circular citing Jakim when this event had been going on for years?

The Education Ministry and Jakim should take heed of opportunities to foster unity instead of creating division.

Jakim should return to the true teachings of Islam and look after the many societal issues faced by the Muslim community such as baby dumping, drug abuse, sodomy, prostitution, practising/preaching hate against others, etc, which seems so rampant despite years of increased religious class time in schools since 1974.

Anonymous_4080: I believe Tamils and other rational, sensible Malaysians find that the "haram" label on Ponggal celebrations offensive.

The label may be correct to dogmatic Muslims based on Islamic jurisprudence, but they are inconsiderate of others' feelings and perspectives.

To normal Malaysians, attending or even participating in rituals or celebrations performed by other faiths and cultures does not, and will not, diminish one's own faith and values.

It is simply a means to share the happiness of such events, and spread goodwill among ourselves for the good of humankind.

Proarte: From calling Ponggal a “haram” activity, the ministry today has done a volte-face and now advocates that “the culture and customs of different races should be known, understood and respected by all" - how nice.

But damage and division have already been done but at least this is a form of damage limitation. Let us hope nonsensical behaviour will not raise its ugly head again.

By any criteria calling Ponggal haram is immoral and disgusting but Islam as it is practised in Malaysia appears to have a separate set of values which runs counter to logic and basic notions of justice and morality.

The civil servants such as the deputy DG under the bogus excuse of Muslim family concerns about “spiritual contamination” by participating in an Indian harvest festival, has brought Islam into ridicule and public odium.

Fortunately, the idiocy of Jakim and the deputy DG has been exposed and chastised indirectly by the latest statement from the Education Ministry.

I believe the directive came from Mahathir and we can see the little Napoleans in the Education Ministry and Jakim crawling back into the holes with their tail between their legs.

No doubt there will be more of such statements in future under the camouflage of Islam but rational people should continue to condemn idiocy and immorality even if it is done in the name of religion.

BebekTepiSawah: Among all this confusion, we missed the elephant in the room - the existence of Jakim has been a total waste of government resources.

The government should instead use the billions of ringgit wasted on Jakim to help millions of poor Muslims.

Malaysianheart: Religious teachings do not seek to plant discord but to help people live in peace, acceptance and harmony.

Jakim does not seem to know the difference between culture and religion, perhaps because to them culture, race and religion are always seen as one.

I have Chinese friends who are Muslim but they know the difference between Chinese culture, which they practise, and Islam as a religion, which they have embraced. They don't have a problem distinguishing between culture, race and religion.

Perhaps Jakim personnel should acquaint themselves with this basic knowledge and teach those they come into contact with what the differences are between religion and culture.

With the way they are going about now, very soon everything Malay and Islam will become haram to non-Malay and non-Muslims.

As it stands now, it looks like all non-Malays who are Muslims would be sinning if they practice their cultural traditions.

I hope the government will come out strongly to put an end to this tunnel-vision of Jakim, whose actions are dividing Malaysians for no sound reason.