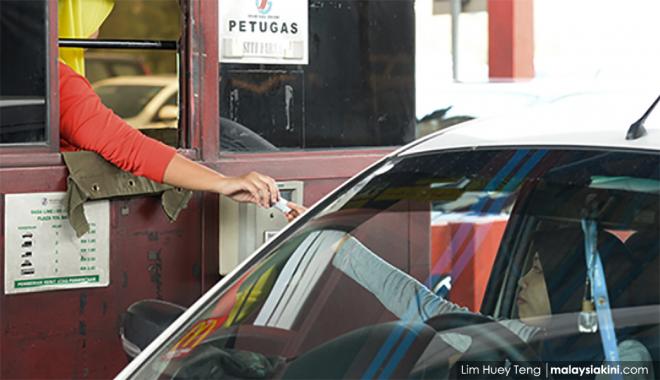 YOURSAY | ‘The decision not to sell Plus to private bidders is definitely good news for M’sians.’

PM: Plus not for sale, gov't to lower and fix toll charges

Kim Quek: I recall that the North-South Expressway was constructed by UEM Group back in the 80s at a cost of RM5.8 billion. By right, the toll charges should have been abolished by now. But instead, rates have been multiplied and concession period hugely extended in the past.

Extending it by a whopping another 20 years (making the total extension of 40 years until 2058) for a token reduction in toll charges doesn’t make sense.

Must Malaysian consumers be made the perpetual victims of bloodsuckers - first by Umno's proxy company, now by the government itself?

Anonymous 24331438100949: It is an excellent move by the government to not sell Plus Malaysia Bhd to a private company.

Privatising Plus only means that toll payments by the rakyat ends up enhancing the profit of private companies.

It must also be noted that if the government owns Plus, it will be easier to reduce toll charges in Plus-owned highways in the future if the need arises to lessen the rakyat’s financial burden.

The public will continue supporting the government now that it is fulfilling its election promises one by one.

The next issue for the Pakatan Harapan government to tackle is the National Higher Education Fund Corporation (PTPTN) loan repayments. It will be good if discounts are given to repay the loans, especially to those in financial difficulties.

Anonymous 2431261472204536: Harapan’s promise before the general election was to abolish highway toll charges.

No matter how the government tries to spin it, the truth is that Harapan did not keep its promise and lied to the people.

Vladivostokian: Indeed, the decision not to sell Plus to private bidders is definitely good news for Malaysians.

Even if the toll rates are not reduced substantially, the profits still go major shareholders Khazanah Nasional Bhd and Employees Provident Fund (EPF).

This will benefit the millions of EPF contributors in the country, while Khazanah is a beneficial sovereign wealth fund, unlike the 1MDB.

So, let these two entities maintain full control over Plus in the best interest of the rakyat.

Happy Farmer: Since EPF and Khazanah own Plus, it’s just a matter of these two entities performing their “national service” by reducing the toll charges.

Plus should operate efficiently, service all borrowings on time, and be prudent on maintenance costs. Most importantly, do not always boast of high profits as these are derived totally from all the highways’ users.

Annonnymous 080: Now that we are going to have an 18 percent reduction in toll charges, can we have a decrease in food prices as well. Transport charges make up 50 percent of the cost that we pay for food.

Logistics and transport companies will benefit from the lower toll charges, and it is only right that the reduced cost price is passed on to the end consumers as well.

On the discussion whether to sell off Plus, I believe the government knew all along that it would not be sold off to private bidders.

This is atypical of creating diversion, excitement, and anxiety among the public, and then declaring in the end that the government cares for them and thus, no sale.

The government should have, instead, cast in stone that there will never be any more extension of concession as Plus is already more than 30 years old and its original concession was only for 20 years.

The rakyat continues to bear the costs due to the failure in ensuring integrity to the concessionaire’s traffic and financial projection models.

Mosquitobrain: The toll concession agreements since the beginning have been lopsided, favouring the highway concessionaire. Can the concessions be made for public viewing?

Plus should have recouped its construction costs after collecting tolls for more than 20 years.

The North-South Expressway should have been made toll-free by now. An announcement of a mere 18 percent discount is definitely not enough.

PKC: Prior to Prime Minister Dr Mahathir Mohamad’s announcement, Plus had another 18 years to collect toll from the public. Now, Plus is given another 20 years extension, which means highway users will be forking out money for another 38 years.

The toll charges were reduced by 18 percent while overall, the toll collection period has been increased by a whopping 111 percent since the first concession agreement was signed.

Beeja: Congratulations to the Khazanah CEO Shahril Ridza Ridzuan for his tenacity in doing right by all Plus stakeholders.

As for the Finance Minister Lim Guan Eng’s statement that RM1 billion of taxpayers’ monies would be incurred as compensation in lieu of toll increases, I say go ahead.

If we as taxpayers can stomach RM1.3 billion to fund Jakim (Department of Islamic Development) who work against the interest of 30 percent of the country’s population, why grudge RM1 billion that benefits all Malaysian road users irrespective of race or religion.

The Himalayans: Every year, the number of cars using the Plus highway increases at a very fast rate.

An annual reduction in toll charges will not hurt Plus’ cash-cow status because of the continuous increase in the number of vehicles.

Therefore, the toll rate should be reduced by at least 20 percent annually at least until the next general election.

Malaysian1: Plus is doing a good job at operating and maintaining its highways.

But safety at certain stretches must be improved. Put up speed cameras at accident-prone locations so that drivers don’t overspeed. For example, the interchange at Bukit Lanjan heading to Jalan Duta is accident-prone.

Just by looking at the condition of the guard rails on the sides we can know many accidents have occurred at that bend.

Will Plus keep repairing the guard rails forever? Put up speed cameras to deter accidents.

Not Giving Up: It was a good effort by the government and all the other individuals concerned to reduce the toll rates.

One has to take note that the decision was taken amid all the uncertainties and excessive plundering that has been going on during the previous administration.

I hope the terms and conditions of Plus’ concession agreement can be improved further in the near future.

Kangkung: Finally, Mahathir and his cabinet did something which directly benefits the rakyat.

While waiting for the 18 percent discount, can the highway users receive a toll discount for this Chinese New Year?

yoursay
plus
toll charges
epf
khazanah
Related Reports
Good deal for Plus, but what’s in store for Malaysians?
17 Jan 2020
Plus decision: Khazanah unfazed by tycoon's ‘liar’ accusation
16 Jan 2020
Khazanah: Gov't has been engaging with Plus shareholders
15 Jan 2020
Toll discounts, party polls, 'PM Anwar' - what's coming at you in 2020
1 Jan 2020