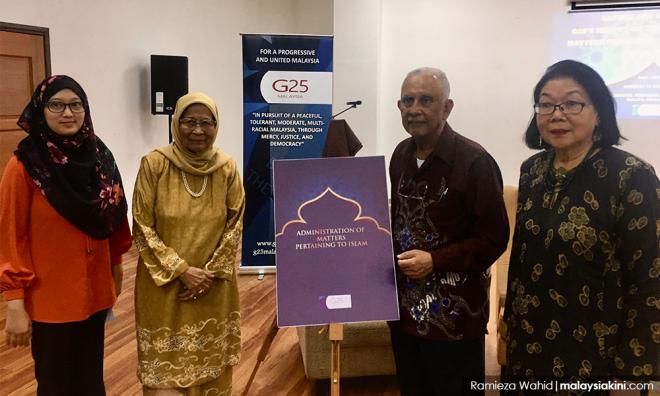 Yoursay: Let there be no compulsion in religion

YOURSAY | 'If people want to forgo heaven, no one can stop them.'

G25: Decision of a Muslim to leave Islam between self and God

G25: We do not condone nor encourage Muslims to leave Islam

Anonymous_f34cda3a: Article 11 (1) of the Federal Constitution guarantees every person in Malaysia, and not merely citizens or non-Muslims, three distinct rights - the right to profess, practise and propagate their own religion.

However so, the actual relationship is between the individual and God. It must never be forced.

Indeed, Indonesia, which has the largest number of Muslims in the world, is more liberal than Malaysia.

Evin K: This is why it is important for any modern democracy, particularly in the time and age we are in today, to move towards a clear separation of religion and state.

The only onus of any government should be on stately matters and nothing else.

Unless laws are being broken, religious affairs must be left to the wisdom of each individual - there mustn't be government-backed impositions on a person's religious conviction.

Bamboo: G25 is absolutely right. The government is supposed to run the affairs of the country and not be involved in the personal affairs of any citizen.

Religion is a personal matter, between the person and God.

Pokok Kelapa: Yes, G25, we hear you. Thank you for voicing out and you do have a point. The MyKad clearly states a person who is a Muslim (Islam), not other religions.

Till the day we do away with forms or documents that state race and religion, only then will Malaysians be united and closer for the better.

David Dass: G25 is courageous to bring this issue out in the open. They are courageous enough to challenge positions held by many of the leaders of the conservative Muslims in the country.

Anonymous_1371463676: We should not force one to practice one’s faith. And any religion, for that matter. If people want to forgo heaven, no one can stop them.

God gives every human being the free will to love or not to love Him. Even God does not force, why should we?

Kangkung: I’m not sure why anyone wants to force a person to stay in a religion.

What is the use of forcing one to adhere to a religion when the person has made up his or her mind? Is it because of insecurity?

However, because being a minor, the parents are responsible to guide their children according to their faith.

Once you are an adult, you should be allowed to choose the path which will guide you to be a better person and with peace in your heart.

Anonymous_1544340881: I have great respect for all religions as a personal choice and their founders.

I am schooled in the 70s, where we are taught to question the world around us and think logically.

Logically, refusing a person's choice to choose his religion and punishing a person for not following the tenets of a religion does appear to be a compulsion to me.

Coward: Being given the option of leaving but choosing to stay will make one a better believer.

Forcing someone to stay, or putting obstacles in their path, cannot and will not keep someone in the religion.

There is no need to fear people coming and going - if their calling is your religion, they will be back as a better believer.

When people are beginning to ditch religious beliefs, there are also equally many who are staunchly religious.

This is something welcoming because there are many who continue to believe there is a power that holds the creation together and favours positive and peaceful actions.

Citizen_Zero: G25 is on the side of truth. But they have to play it smart.

They can't say things which will outright scare the unthinking, slave-minded masses who have believed in the lie for so long, including many good people.

The first step is to plant the seed of thought. The realisation will happen and spread naturally.

They cannot afford to give stupid politicians who fear losing their grip on the simpletons the fodder an excuse to go full ballistics and incite their followers to burn the country instead of surrendering to the truth.

The truth is the biggest enemy to those who live and spread lies for their selfish benefits.