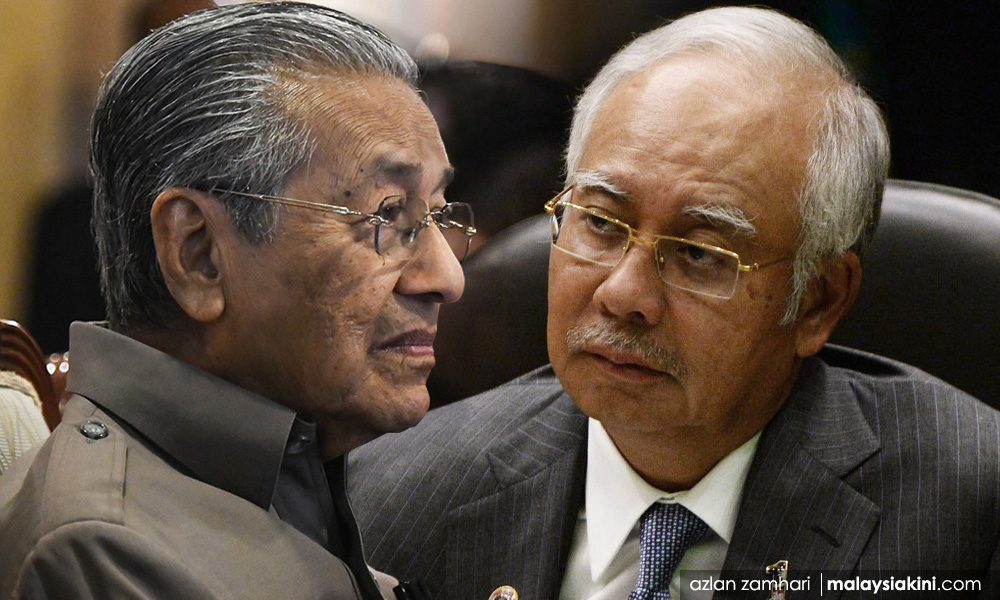 Mahathir holds no grudges, can work with anyone but Najib

Prime Minister Dr Mahathir Mohamad alluded that in politics, there are no permanent allies or foes and noted how he worked with various individuals over the decades.

However, there is one exception – former premier Najib Abdul Razak.

“Do you know I worked with (former prime minister) Najib before? But I now can work with (DAP veteran) Lim Kit Siang.

“See, I don't hold it (grudges) against him (Kit Siang). If we can do something that is good, I will work with him. But Najib, I don't think he can do anything good because he broke the law [...] I think he will have to pay a high price for stealing government money,” he said.

Mahathir was commenting on the speculation that his supporters are attempting to co-opt PAS into the federal government.

FMT reported that the new political alignment could sound the death knell for DAP and PKR president Anwar Ibrahim's chances of becoming the next prime minister.

Mahathir, however, laughed, when asked if this was true.

“Yes, there is a picture (below) of me greeting (PAS president) Abdul Hadi Awang.

“I greet everybody including unkind reporters [...] not only the nice reporters. That is my job. I meet everybody even though these people were, well, my enemies and all that,” he told a press conference after launching the 5G network services in Langkawi this afternoon.

Malaysiakini was not present at the event but the press conference was aired live on Bernama TV’s Facebook page.

Pressed on whether Pakatan Harapan was seeking external support from PAS, the prime minister spoke about a previous meeting with PAS leaders but downplayed its significance.

He did not state when the meeting occurred or whom he met.

“They met me, they are worried about certain things.

“So there will be instances where in Parliament, certain things are supported. Certain laws from the government are supported by PAS if it is good. But if they think it is bad, don’t support,” he said.

Hadi has repeatedly declared his support for Mahathir’s leadership and for the latter to serve a full five-year term rather than hand over to Anwar.

Previously, the Harapan secretariat had accused former Umno vice-president Hishammuddin Hussein of attempting to form a new government without DAP.

The Umno lawmaker has denied this as well as the allegation that he is attempting to prevent Anwar from succeeding Mahathir.