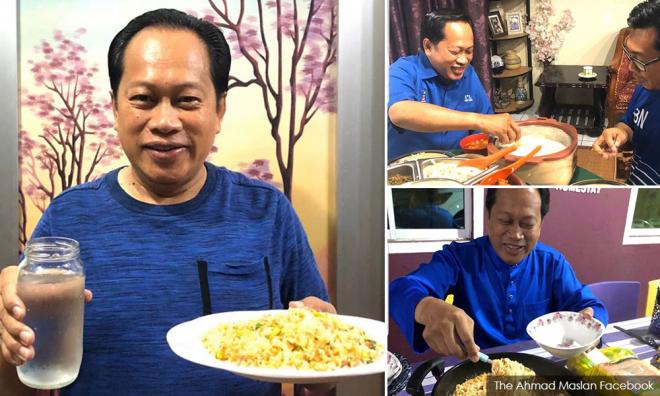 You can cook in prison - Kadir's poetic swipe at Ahmad Maslan

Veteran journalist A Kadir Jasin has penned a poem in response to Ahmad Maslan's poetic defence against the charges of failing to declare RM2 million which he received from former prime minister Najib Abdul Razak to the Inland Revenue Board (IRB) and providing a false statement to MACC.

The Umno lawmaker had recited the poem, which described him as a "victim of tyranny", before entering the chambers of the Kuala Lumpur Sessions Court yesterday.

The former deputy minister is known for penning poems, which he often posts on social media, as well as his culinary skills.

In 2015, Ahmad (above) courted flak from netizens when he posted a recipe for a GST-free fried rice dish to educate the people on making better financial decisions.

Meanwhile, Kadir, in his poem posted on his blog, said Ahmad should not feel alarmed even before being tried in court.

“If you have not committed a crime, the 'tyrannical authorities' will lose (the case),” he added.

He also recalled how Ahmad had “courageously and arrogantly” defended Najib “day and night” when BN was still in power.

However, Kadir (photo), who is also Prime Minister Dr Mahathir Mohamad's media adviser, said if it is fated that the Pontian MP should land in prison, then the latter should not feel crestfallen.

“Your expertise is valuable. You can cook, the (other) prisoners would be delighted,” he added.

On the same note, he advised the Umno leader to conceive some form of deception to avoid prison if he is found to have pocketed public funds.

Apart from Ahmad, former Umno lawmaker and Felda chairperson Shahrir Samad was also charged yesterday with failing to declare RM1 million, which he received from Najib, to the IRB.

Both of them claimed trial and have been released on bail.

Below is the Bahasa Malaysia poem penned by Kadir: