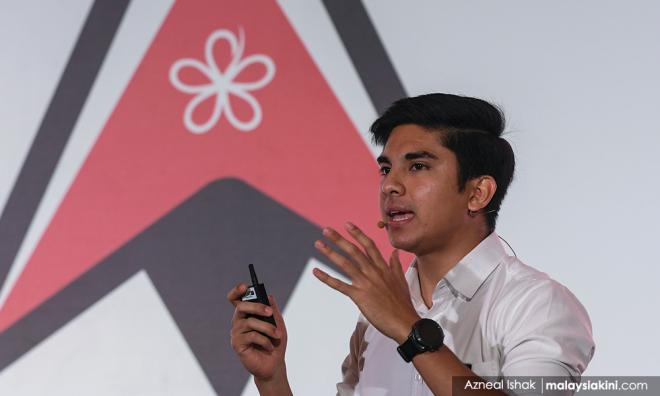 In a joint statement this afternoon, seven DAP Youth leaders said after the recent drug bust at a condominium in Puchong, the Bersatu Youth chief should not be telling others to put their house in order.

“Look who's talking about putting the house in order?

“If at all there is anyone who should put their house in order, it is Syed Saddiq. He should put the party wing that he is leading in order first before trying to advise others,” they added.

The DAP leaders also defended those whom Syed Saddiq singled out as launching incessant attacks on Mahathir and making it difficult for the latter to administer the nation.

“Syed Saddiq should read the statements of the said leaders before commenting on the issue... He also accused the leaders of pressuring Mahathir to step down.

“The majority of the leaders Syed Saddiq mentioned in his statement did not expressly mention that Mahathir should resign immediately. They just echoed the views of the majority of Malaysians.

“Malaysians want a peaceful power transition without surprises. These leaders did not say Mahathir should immediately resign. What they are asking for is a date to be set,” they added.

According to the seven, a clear transition date would clear the confusion surrounding this issue.

“What is so difficult for Syed Saddiq to understand? Syed Saddiq himself conceded that the power transition was something that was discussed and decided by the (Harapan) presidential council.

“What is so wrong in asking for clarity in this matter? Their comments are nothing but the free expression of their opinions and views,” they added.

The seven claimed that Syed Saddiq, who is also the youth and sports minister, was attempting to divert attention from the arrests of several Bersatu Youth members during the drug raid and linked his statement to the upcoming party polls.

Among those arrested were Dengkil assemblyperson Adhif Syan Abdullah and an officer from Syed Saddiq's ministry.

“As Bersatu's party election is nearing, we can see more heroic statements from Syed Saddiq, who is defending his post,” said the DAP Youth leaders.

They also reminded the minister that “those who live in glass houses should not throw stones.”

In an immediate response, Perak Bersatu Youth chief Mohd Hafez Mubin Mohd Salleh asked the DAP Youth leaders to zip it so as not to aggravate the situation.

He also questioned the relevance of linking the recent arrest of Bersatu Youth leaders with Syed Saddiq.

"Does the DAP too not have leaders facing cases that are under investigation?" he said.

He added that Anwar had personally asked Pakatan Harapan not to press Mahathir on transition date.

"Even DAP veteran Lim Kit Siang has instructed Harapan leaders and members to cease their obsession with the transition.

"So my advice is for them to take the advice of their party's leader instead of trying to become political champions of issues that would only court the people's unhappiness," he said.

Syed Saddiq accused these DAP and PKR leaders of being fervent supporters of PKR president Anwar Ibrahim, who is Mahathir's designated successor.