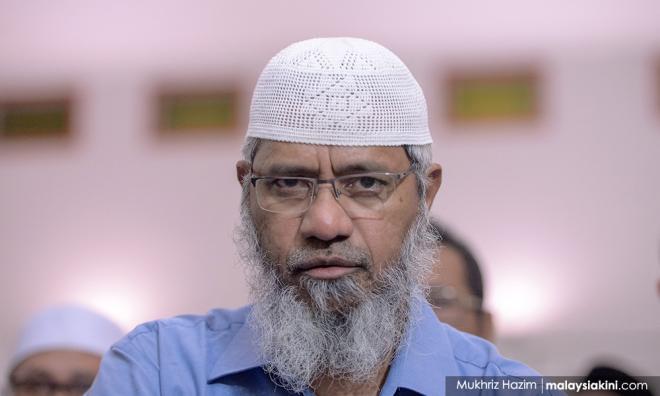 According to a copy of the statement of claim sighted by Malaysiakini today, PKR member Raveentharan is alleged to have uploaded the five FB postings between Oct 13 and 17.

Zakir claimed that the five FB postings were actuated by malice, hatred, envy, and/or without making verification from him pertaining to the truth and validity of the allegations in the postings.

The plaintiff alleged that the defendant, through the uploaded five statements, imputed that the former is a person of bad character and is a threat to the national security, peace, and harmony of Malaysia.

Zakir claimed that the five statements are unfounded, untrue, fabrications, spurious, entirely fictitious, and/or have been twisted and slanted to meet Raveentharan’s purported agenda.

(a) Inciting public hatred, ill-will and/or contempt towards the plaintiff;

(b) Achieving cheap publicity, mileage and/or adulation for the defendant;

“By publishing the said defamatory statements, the defendant had also incited and/or provoked racial, religious or ethnic sensitivities among Malaysians in general.

Zakir claimed that his lawyers had sent a letter of demand dated Nov 1 last year to Raveentharan, demanding a retraction of the purported defamatory statements, an apology and/or damages over the said statements.

The plaintiff however claimed that the defendant refused, neglected and/or failed to accede to the former’s demands.

Zakir is seeking a mandatory injunction to compel Raveentharan to remove the five defamatory posts from the internet within seven days of pronouncement of judgment (if in favour of Zakir).

The plaintiff seeks a permanent injunction to restrain the defendant from publishing, distributing, and/or uploading any defamatory statement against the former on any medium whatsoever.

The plaintiff seeks general, compensatory, aggravated, and exemplary damages, costs on a solicitor and client basis, and any other relief deemed fit by the court.

Checks at the online cause list showed that the suit is set for case management before the Kuala Lumpur High Court Registry at 9am tomorrow (Feb 10).

According to a copy of a notice of application by Raveentharan, who is also a practicing lawyer, tomorrow’s case management is in relation to his bid to transfer the suit to the Penang High Court.

Among the reasons cited for the transfer are that the potential witnesses that the defendant may call for the suit are all in Penang, among them being Penang Deputy Chief Minister II P Ramasamy, Penang Mufti Wan Salim Mohd Noor, Bagan Dalam assemblyperson M Satees, and an investigating officer of a related police report lodged at Penang.

The notice of application was filed on behalf of Raveentharan by Penang-based legal firm, Messrs Baljit Singh & Company.

These legal notices were in relation to statements issued following Zakir’s controversial remarks on the Malaysian Chinese and Indian community during his speech in Kelantan early August last year.

Since then, it was reported that Zakir had filed two defamation suits against Ramasamy.