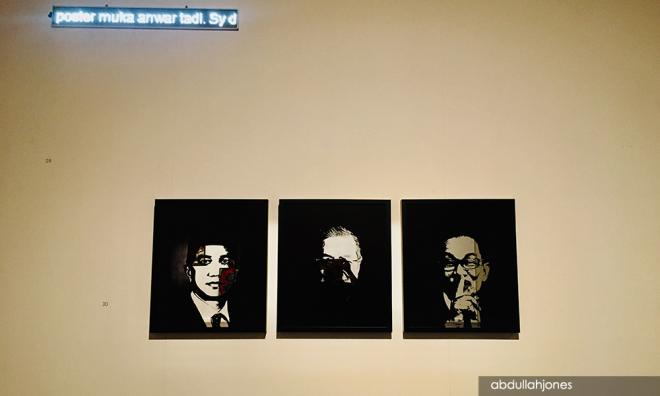 UPDATED 11.40PM with responses from Hakam and NAG

Prominent visual artist Ahmad Fuad Osman has requested that the National Art Gallery (NAG) close an exhibition of his life work after four pieces were removed.

Two of the removed artworks depicted someone with the likeness of PKR president Anwar Ibrahim.

In an open letter on his Instagram page, Fuad said he was officially informed by the NAG on Jan 21 on the matter, citing complaints by a NAG board member.

"On Feb 7, I wrote to NAG stating that I found this act of censorship profoundly troubling and unacceptable. It is arbitrary, unjustified and an abuse of institutional power.

"I asked them to fully explain their reasoning, requesting answers to my questions about their process and reasoning. Their decision and the explanation provided lack transparency and accountability.

"I also requested that NAG close the entire exhibition immediately, rather than let it remain open in its compromised state," he wrote.

The exhibition titled "At The End Of The Day Even Art Is Not Important" was meant to be a mid-career survey exhibition. It was open to the public on Oct 28, 2019.

According to Fuad, it was scheduled to close on Jan 31 but was extended until Feb 29 on NAG's request.

In a statement later, the National Human Right Society (Hakam) condemned the NAG’s decision and said it’s a violation of the freedom of speech protected under Article 10 of the Federal Constitution.

It urged the gallery to reverse its decision to take down Fuad’s paintings, and for the Tourism, Arts, and Culture Ministry to commit not to censor artistic expressions in the future.

“Politics play a big part in our everyday lives. Art, in turn, is a reflection of life.

“Politics should not in any way be deemed as ‘sensitive’, ‘unsuitable’ or ‘undesirable’ in the arts.

“In fact, the arts should readily comment, critique and satirise politics in order to produce an enlightened electorate. The National Art Gallery - of all bodies - should hold true to these principles,” said Hakam secretary-general Lim Wei Jiet in a statement today.

The NAG, meanwhile, defended its move to remove the paintings, saying it is within its right to do so.