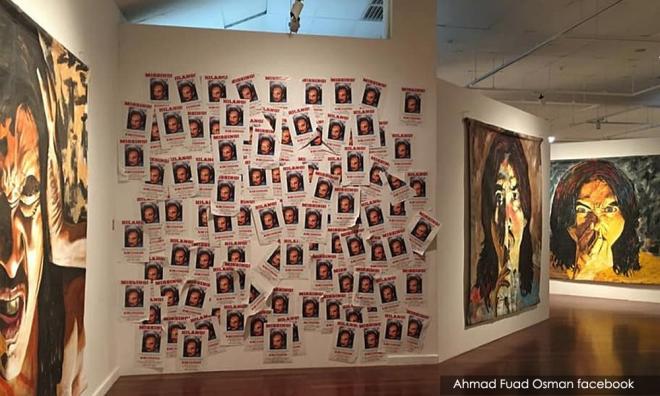 National Art Gallery: We have the right to remove artwork

The National Art Gallery (NAG) has said it is their standard operating procedure to include in their agreements with the exhibitor that it is the gallery’s right to remove any artwork touching on the dignity of any individual, religion, politics, race, tradition or country.

“Exhibitions are a process and it is not the final product, even during the period of the exhibition, this process is always ongoing in order to achieve the appropriate maturity for our visitors and society,” said NAG chief director Amerruddin Ahmad in a statement today.

This comes after prominent visual artist Ahmad Fuad Osman said four pieces were removed from an exhibition of his life work at NAG titled “At The End of The Day, Even Art is Not Important”.

In its statement today, NAG confirmed that they removed the four pieces titled Untitle 2012, Dreaming of Being Somebody Afraid of Being Nobody, Imitating the Mountain 2004 and Mak Bapak Borek, Anak Cucu Cicit Pun Rintik.

They said this action was taken based on the decision made in a NAG meeting and that there have been previous situations where the artists and the agency made changes to the arrangements and selection of works in order to achieve the appropriate results with the visitors.

NAG is not touching on the credibility or capability of the artists in such situations, they said, but it is of their opinion that certain artworks need a lot of guidance, explanation and understanding of art in order to be appreciated and not misinterpreted.

The action of removing certain artworks is based on the response and complaints received from the society, they added.

“The role of this gallery is as an ‘institutional gallery’ which is funded by the government and needs to operate based on its norms,” said Amerruddin.

After the removal of four of his pieces, Ahmad Fuad had also requested for NAG to close the exhibition of his life work.

"On Feb 7, I wrote to NAG stating that I found this act of censorship profoundly troubling and unacceptable. It is arbitrary, unjustified and abuse of institutional power.

"I also requested that NAG close the entire exhibition immediately, rather than let it remain open in its compromised state," he had said.