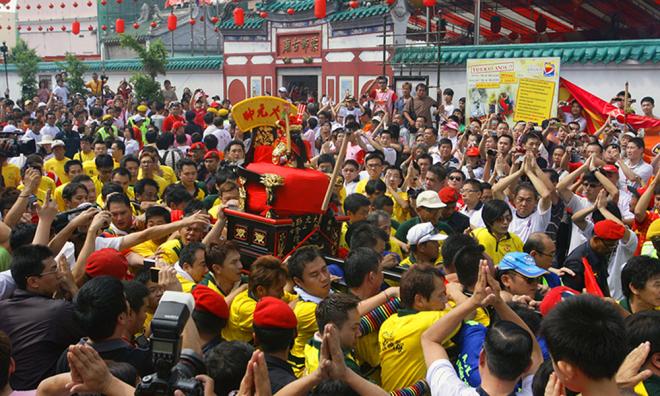 Covid-19 fears forces JB Chingay celebrations to be toned down

CORONAVIRUS | The annual Chingay parade in Johor Bharu regularly draws hundreds of thousands of revellers onto the streets.

In light of the ongoing Covid-19 outbreak, however, the organisers said they will scale down the celebrations on Friday although the state government advised them to cancel the parade.

“The government believes that if the disease spreads, it will not be able to maintain control of the situation. We respect the state government’s decision and cancel this activity […]

“However, the procession of the deities is our tradition, so for this year, we will do the next best thing.

“We have negotiated with the state government, so the five deities will be paraded on the back of trucks, while other things like the dragon and lion dances, parade floats are all cancelled.

“I am very sorry. Everyone has worked hard to prepare for the parade, especially the floats. Millions have backed the floats, but it will not materialise,” Johor Baru Tiong Hua Association president Ho Sow Tong told a press conference today.

Customarily, effigies representing the deities would have been loaded onto litters to be carried by a group of people during the parade. According to Bernama, last year, some 300,000 people had attended the parade.

In a statement earlier today, the Johor government had urged the organisers to cancel the Chingay parade over concerns it would help spread the Covid-19 disease.

Menteri Besar Sahruddin Jamal said the decision was based on the state Health Department’s risk assessment and its inability to conduct large-scale health screening of the parade’s visitors.

He added that security forces and organisers are also unable to determine the size of the crowd that would attend the parade.

“The state government is of the opinion that this decision should be made as a precautionary measure due to concerns large-scale spreading of the disease if the parade is allowed to proceed,” he said.

However, organisers will need to prepare a list of names and addresses of all participants which would then be handed over to the Johor Health Department as a precaution.

He also urged those not directly involved in the Chingay celebrations to avoid attending the ceremonies to protect their health and others.

As of today, 44,787 cases of Covid-19 have been reported worldwide, including 1,112 deaths. The number of cases in Malaysia remains at 18 for the second day straight.

Across the Johor Strait, however, 45 cases have been reported as of yesterday. This includes 19 cases of local transmission that occurred within its borders.

In response to this, Singapore has raised its Disease Outbreak Response System Condition to "orange' – its second-highest alert level.

A joint Malaysia-Singapore taskforce is being set up to coordinate efforts to tackle the disease.