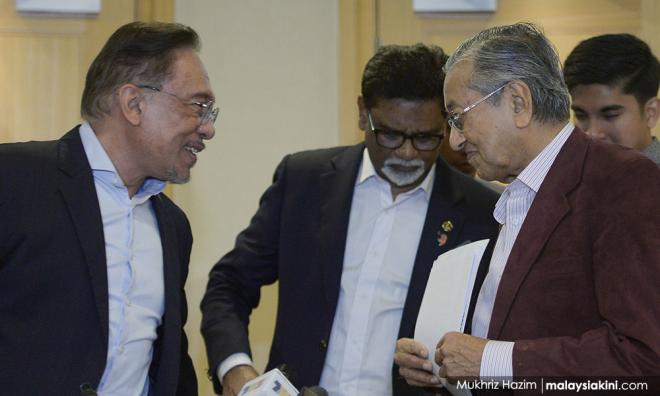 Prime Minister Dr Mahathir Mohamad chose to walk down the road often travelled by Malaysian politicians - blame the media for their controversies and quagmires.

According to him, the media is responsible for the drama surrounding the succession plan between him and PKR president Anwar Ibrahim.

“This press lah,” he replied when posed with a slew of questions on the matter.

“The press takes much delight (in this issue). So there are stories (on this matter) even when there are no controversies,” he told reporters in Langkawi today.

The prime minister also claimed that the media is pining for a possible altercation between him and Anwar.

“So for the press, the possibility of 'bertumbuk' (fist fight) between Anwar and me (is appealing). It will be more fun (for the media) to tell stories if everyone 'bertumbuk',” he added.

Mahathir was referring to the various speculative reports on an impending showdown between Mahathir and Anwar, similar to their 1998 fallout.

Yesterday, Malaysiakini also reported that next Friday's Pakatan Harapan presidential council meeting could be an explosive affair. The last meeting was held on Nov 23.

Sources claimed that Mahathir had the support of more than 130 federal lawmakers, including those from Gabungan Parti Sarawak, to remain in power until the end of his term.

It was claimed that Mahathir could use this as his trump card should he be pressured to step down during the meeting.

Meanwhile, Anwar yesterday confirmed the existence of a “cunning plot” to keep Mahathir in power but said the latter was not involved.

He also said the succession issue would be finalised at the presidential council meeting next week.

During his presser in Langkawi, Mahathir also distanced himself from the alleged plot, saying he was not involved in “other activities.”

Quipping that some want him to remain in power for 22 years, similar to his first tenure as prime minister from 1981 to 2003, Mahathir, however, said he would step down after the Asia Pacific Economic Cooperation (Apec) summit in November.

Previously, Sarawak Report alleged that MPs “have been pressured to fly in from all corners to Kuala Lumpur” to ink a statutory declaration (SD) in support of Mahathir.