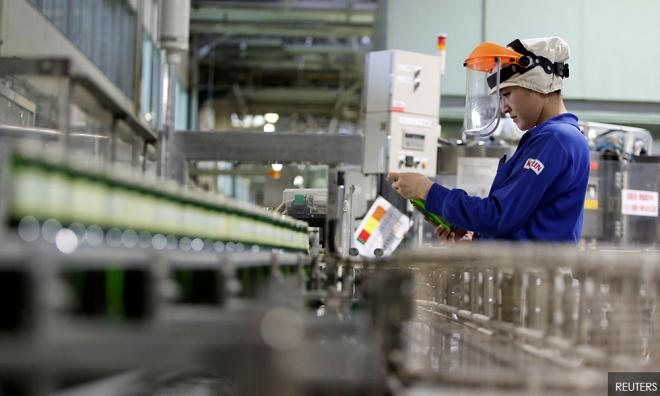 YOURSAY | ‘Bersatu Youth wants to score cheap points with their supporters by going after this beer issue.’

Bersatu Youth up in arms over beer factory operating during MCO

Vijay47: This expected protest by Bersatu Youth, no doubt to be soon followed by PAS, brings to mind that ancient mystery, “To beer or not to beer. That is the question”.

The opposition to Heineken being allowed to continue production of their popular beverage proves that there will always be differences in opinion which cannot be reconciled, that west is west, and yeast is yeast.

Yet Bersatu’s stand will cause proponents on either side to be shaken and stirred, and the bitter truth is that their argument does not hold water.

Bersatu, which seems “drunk with power”, may of course growl like a tiger, the anchor of its position being that it is “not nice” to allow Heineken to continue operations during the movement control order (MCO) on the strange ground that alcoholic products are ‘haram’ under Islam.

But MCO is not founded on religious principles, its only concern for granting approval is inter alia whether the activities in question are part of food and drink; this case of beer fulfils all necessary conditions.

Extremists have always been frothing at the mouth over anything they consider not in line with their religion; alas, the sun shines on all and the coronavirus, not the Corona beer, is unmindful of who its victims are.

In fact, a substantial portion of the coronavirus patients in Malaysia are from the tabligh cluster, who generally can be expected to look upon beer and similar items with intense displeasure.

It is noted with much regret, Bersatu, that you have been prominently silent since the virus first made its rounds, you did not voice any concern for at least fellow Muslims who had fallen, you did not even emerge to urge the recalcitrant tabligh members to come forth to seek medical attention.

You now come out of the cellar to rail against a drink unrelated to the health crisis we are undergoing. Your demand is as logical as non-Muslims seeking for a ban on air sirap, or asking for a stop to selling nasi lemak since it is not essential and man can live on bread alone.

Quigonbond: Instead of criticising Heineken for operating during the MCO, it should be lauded and granted exemption from the MCO for its hygiene standards and probably extensive automation.

Beer may not be essential for Muslims, and many non-Muslims also don't necessarily drink beer, but there are people who do and find it quite therapeutic especially if they are confined to home.

You can also try to argue that alcohol leads to domestic violence. But if supply is low, it's not that these people will stop buying. They will just have to pay more. Paying more leads to further financial strain at home.

Also, think about your own backdoor government and how their special committee has not come up with any solution to help small- and medium-sized enterprises (SMEs).

If workers at Heineken have a full-time job, and sales remain good, they won't need financial help. The monetary aid can be channelled to many other businesses going into crisis.

G-Sam: Malaysia might be run by a Malay-Muslim government but Malaysia is not a Muslim-only country.

I really don't understand the Muslims’ view on alcohol. It is haram for Muslims only, nobody else. So advise your fellow Muslims to avoid alcohol if you think it is your responsibility as a good Muslim.

Bersatu Youth wants to score cheap points with their Malay supporters by going after this issue. Be reasonable and be a Malaysian political party, not a Malay Muslim party only.

Alcohol and gambling have been a major contributor to Malaysia’s economy and will do so for years to come. Accept it and be glad that most of the tax that comes from alcohol and gambling will be used to pay the 1MDB debt, among others.

Hopefully, by your grandkids’ time, they can enjoy better economic stability than us.

Bersatu Youth information chief Ulya Aqamah Husamudin, you should advise your Muslim brethren not to drink. Let the non-Muslims drink. We know how to drink responsibly.

Funds for Department of Islamic Development (Jakim) must be ensured that it does not come from pork sellers, beer factories, Toto shops or from Genting Malaysia.

Bersatu Youth should not get allowances from the government as it is deemed as tainted taxes. MPs from both sides of the divide should speak about this.

In fact, PAS president Abdul Hadi Awang should declare that too. He can also demand all beer factories, all Toto shops and the Genting casino to close down since he is now part of the government. Why isn’t he speaking up?

Bersatu Youth should speak on that as well. Seriously, the non-Muslims will not mind it but it will hurt the federal incomes from these sources to pay the overly bloated civil servants or ministers in this country.

Anonymous_1543386425: ‘Haram’ seems a popular word among those who try to outdo others over religious values.

If possible, the government should be relaxing the MCO to allow certain industries like the beer factory to operate so that workers do not lose their jobs and there is economic activity and productivity. This would prevent further injury to our economy.

2 Cents: The last I checked Bersatu is a component party of Perikatan Nasional (PN), the new ruling coalition. In fact, a leading one as the current prime minister is a leader of Bersatu.

What kind of explanation are you all expecting when this is clearly the direction of a government helmed by your party?

For those who got hoodwinked by the narration of what PN could offer from a race and religion perspective, you can now see the result from combining three largest parties with the "Melayu-Islam" branding.

Dompet Saya: Dear Bersatu Youth Einsteins, can I request you pursue these cases with the same vigour. This, this and this. Thank you for your attention.