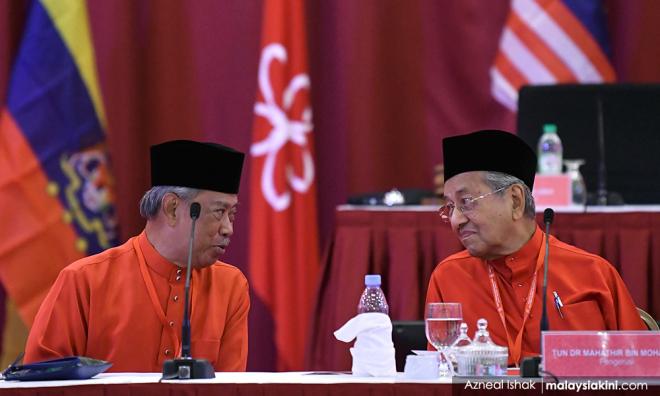 YOURSAY | ‘Mahathir was just portraying himself as a true reformer to gullible Malaysians.’

Quigonbond: What dilemma? Come May 18, the first order of business is to vote in a new House speaker, give an update, no questions allowed, and adjourn the Parliament another six months to allow time to buy over more MPs or work out a reconciliation with former prime minister Dr Mahathir Mohamad.

Working out a reconciliation with Mahathir isn't as difficult as one would imagine. Mahathir made it very clear that he does not wish PKR leader Anwar Ibrahim to be PM because he is not Malay-centric enough. That's his world view.

It is of paramount consideration, never mind under Perikatan Nasional (PN) there will be no manifesto, zero reform, lacklustre anti-corruption, questionable modernisation, progress, etc.

In my mind, Prime Minister Muhyiddin Yassin has helped Mahathir achieve his objective of not making Anwar PM, not giving Harapan any quarter, and keeping Bersatu in power.

Mahathir should be thanking Muhyiddin for helping him keep his promise to Anwar because he isn't the one breaking it. There is nothing in it for the nation, it is just all about politics.

Kim Quek: Split two-way? No, Bersatu is actually split three-way, considering the ambitious Azmin Ali and his gang of 10 who hopped in at the last moment.

And this fractured party (Bersatu) happens to be leading an ad hoc coalition (PN) patched together also at the last minute. Bigger brothers Umno and PAS have both already declared that the current union is only temporary, certainly not meant to continue into the next general election.

That this ragtag coalition is a product of sheer opportunism to grab power is further illustrated in its inability to work out a common coalition objective and policy.

How could it be otherwise when one party worships money and another chasing the life after, led by a gang of detractors from another party which had declared war on both?

In fact, if not for the Covid-19 pandemic which has left no room for political play, the fault lines of PN would have surfaced all over the place.

With such fragility plaguing this ruling coalition, is it any wonder why Muhyiddin has absurdly reduced the coming parliamentary session to a mere act of rubbing stamping of government decision in a one-day meet where questions and debate are banned?

Kural: The fundamental ethical issue in this embarrassment is as to who is/are the actual renegade/s against the moral obligations enshrined in the founding document of Bersatu.

Obviously, Mahathir and those who still retain loyalty for his leadership shall stand tall in the eyes of many Malaysians. But Malay politics has been rendered stressful it seems in spite of some six decades of dominant if also almost exclusive Malay leadership of governance in this young nation.

There is something unsettling, whether it is about distribution of wealth, management of public resources, capacity for good governance or a sensible acknowledgement that everyone has a legitimate stake that seems to handicap the enjoyment of national prosperity and harmony.

Goliath: Without Mahathir, there won’t be a Harapan, Anwar will still be in jail, we will still be governed by a corrupted party, former prime minister Najib Abdul Razak will still be in command, we will have no two-coalition check-and-balance parliament representatives, there won’t be any hope of a strong opposition coalition, we will never tasted life with a non-bumiputera leading the Finance Ministry and millions of rakyat’s money continued to be plundered by corrupt politicians.

The man may have done much damage the first time in his PM stint, but he more or less had neutralised them during his second. I believe the 90-plus-year-old statesman has done enough to warrant a respectable exit when he finally steps down.

If his strong principle is to stand as opposition to the current backdoor government, it is much respected and applauded.

Anonymous_1371547149: Mahathir was just portraying himself as a true reformer to gullible Malaysians.

I remember when they had their first meeting with the former Agong, it was DAP leader Lim Guan Eng who brought up the matter of a pardon for Anwar and that was why it was expedited. Not Mahathir. He kept his mouth shut.

He was PM and yet he did not ask for a pardon for Anwar. That in itself shows his true colours. Of course, subsequently, he tried to hinder whatever progress Harapan wanted to accomplish.

I believe that the others in the coalition did not want to make a public display of their disagreements with him, thinking that the old man would keep to his promise of stepping down for Anwar. And with him out of the way, and whatever time they had left, they could go full steam ahead with the promised reforms.

But of course, Mahathir would rather cut his nose to spite the rakyat's mandate. And that was what he did with the Sheraton Move.

Why did he not turn up at Sheraton to announce his new coalition with PN? I suspect it has something to do with a deputy prime minister’s position for his son, Mukhriz. Not because he had problems with Umno.

His son to continue as Kedah menteri besar? Well, that was not enough. Let's not make a zero into a hero.

Gerard Lourdesamy: Why should where Mahathir and his four other MPs sit matter to Bersatu? They are still party members and crossing over to sit in the opposition benches is very common even in the most advanced democracies where MPs disagree with their own party's policies.

So far Mahathir has refused to support Muhyiddin, let alone endorse the PN backdoor government. I suspect he will make a statement on May 18 when he attends Parliament. All indications are that Mahathir is waiting for the movement control order (MCO) to be over to make his move.

Harapan has also not made a decision on who is to be the opposition leader since they need to consult other parties and groups in the opposition like Warisan, the Mahathir faction, Upko, PSB (Parti Sarawak Bersatu) and other independent MPs. Neither has Harapan refused to work with Mahathir.

So to those who are ardent supporters of Muhyiddin, do not be so confident about the direction of Mahathir and Harapan. This backdoor government will collapse latest by December 2020, if not earlier.

Fair Play: Look at the bright side. It doesn’t matter where Mahathir will sit in Parliament. He is one lonely old man. He has achieved two firsts which would likely be unbeatable.

1. The longest-serving PM for 22 years as the fourth PM.

2. The shortest-serving PM for 21 months as the seventh PM.

But of course, Mahathir would likely pray Muhyiddin would serve shorter than him.

COMMENT | Who should be the next parliamentary opposition leader?
28 Apr 2020
COMMENT | Mahathir and the myth of power
27 Apr 2020
Muhyiddin: I'm focusing on Covid-19 because rakyat sick of politics
25 Apr 2020
Anwar: Bersatu in government and opposition a ‘new normal’
25 Apr 2020