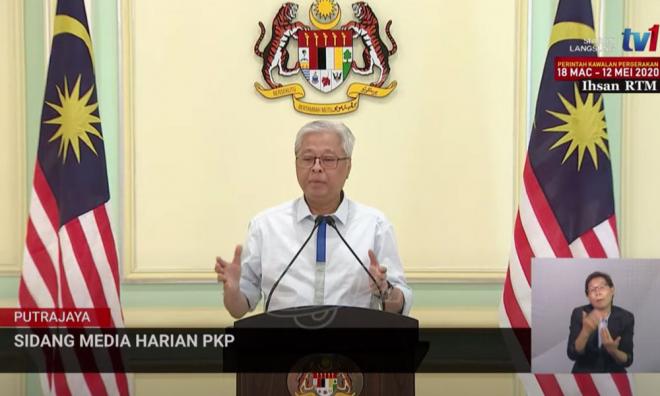 Defence Minister Ismail Sabri Yaakob today stressed that there were no double standards in the conviction of Deputy Health Minister Noor Azmi Ghazali and Perak exco member Razman Zakaria who were fined RM1,000 for violating the Prevention and Control of Infectious Disease (Measures Within Infected Local Areas) Regulations 2020.

Ismail, who is also the senior minister in charge of overseeing the movement control order (MCO), explained that the duo did not violate the MCO but had instead breached the standard operating procedure (SOP) governing movements during the MCO, such as practising social distancing.

He said this is because the government had already announced that elected representatives can move around to assist the people during the MCO, subject to rules and regulations.

For example, the two VVIPs - the Perak exco and deputy health minister - their offence was only in terms of SOP, not a violation of the MCO.

"I had mentioned that elected representatives are allowed to be on duty during the MCO to care for the welfare of the people and therefore can move around.

"But the offence is perhaps in terms of social distancing, in terms of SOP," he told a press conference in Putrajaya.

He added that the court could have given a lower fine of RM100 or RM200 but decided to impose the maximum fine of RM1,000.

The regulation also provided up to six months imprisonment but the court did not jail the duo.

Ismail explained that many of the more serious punishment against MCO offenders were not for violating the MCO alone.

"I have said before that many who were jailed were not because of offences under the MCO alone but also under the Penal Code, such as obstructing a public servant.

"There were those who made racist comments or quarrelled with police when they were arrested or those who tried to ram into roadblocks - with one incident recently causing a police officer to suffer a broken leg.

"So it was not only for violating the MCO but also involved offences under the Penal Code, that is why the punishments are different.

"It is not because of double standards as many would like to picture it," he said.

Yesterday, both Noor Azmi and Razman pleaded guilty before the Gerik Magistrate's Court and were slapped with an RM1,000 fine.

The deputy health minister had posted a series of photographs on his Facebook of him and his entourage visiting a religious school in Lenggong, Perak on April 17.

In the pictures, he is depicted handing out goods to several people. About 20 people were also shown eating a meal together without social distancing measures, including the deputy minister and Perak exco.

The posts have since been deleted on Facebook, but the screenshots of the posting continue to make the rounds elsewhere.

Both Noor Azmi and Razman have since apologised for breaching the MCO.

Malaysia has been under a partial lockdown since March 18.

Under the MCO, all non-essential businesses and services were ordered closed and people cannot leave their homes except for approved reasons, such as buying groceries within a 10km radius.

The move, aimed at curbing the spread of Covid-19, has brought a large part of the country's economy to a standstill.

The MCO is expected to end on May 12 if there is no fourth extension.