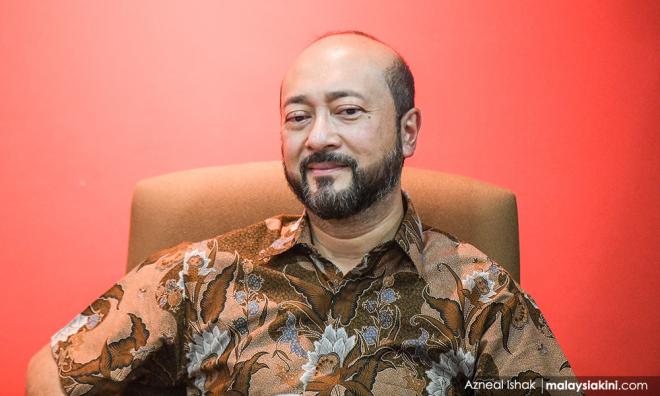 YOURSAY | But Mahathir, why Mukhriz as DPM candidate?

YOURSAY | 'Two partners with a total of 13 MPs to take PM and DPM posts.'

Bright Morning Star: This wily old fox said everyone has "unanimously agreed" to the proposal that Warisan leader Shafie Apdal be nominated as the PM candidate, but then, DAP and Amanah said they are going to bring this latest "option" to their respective parties and the Harapan presidential council for discussion.

Talk about putting words into others' mouths.

Joseph_183: Mahathir, you had just proven the fact that you never intended to help PKR leader Anwar Ibrahim be the PM. You back Shafie whose party holds much fewer parliamentary seats than PKR.

And stop putting words into DAP and Amanah's mouths. They didn't agree to your proposal.

Anonymous Who: Shafie is a good candidate for DPM but not PM. Mukhriz Mahathir is not good enough to be DPM. He became Kedah menteri besar because of his father, not because he was capable.

Mahathir, I think you actually wanted to pass the baton to your son. Your six-month PM-ship suggestion was planned to make your son the next PM. When you resign after six months, you would announce your son as PM.

At the twilight of your life, please make yourself more respectable, just support Anwar as PM and Shafie as DPM.

Caripasal: What a joke! Two partners with a total of 13 MPs to take PM and DPM posts. This is the repeat of appointment of all Bersatu MPs into the cabinet post-GE14.

Is Harapan truly that desperate to regain power? DAP and Amanah must tread carefully as any dispute with PKR will result in political calamity in the coming election. It is better to stay united and forget about forming the federal government for now.

Odysseus: Indeed, why must two parties with five and eight seats respectively be rewarded with PM and one DPM positions?

If you try to break the mental barrier in having an East Malaysian as a PM, why not nominate a non-Malay as a DPM too.

Secondly, it's really a surprise an informal meeting can reach a consensus on such a critical decision. I strongly believe these are words from just the old man.

DoIR: Yes, why a second DPM has to be Mukhriz and not from DAP, the party with the most MPs in Harapan? Should we allow a person to dictate as though he is the PM? Where is the consensus?

DAP, have dignity. Don’t be bullied and let down your voters. Have respect for your voters. After all, your MPs are elected by them, please remember this. Once you lose the voters’ trust, it’s very difficult to regain it.

By the way, why is Harapan having so many problems now? Could an undesirable element be working on weakening it so that Harapan can never succeed in its reformation programme? Who was against it and not willing to bring reform when in power?

Malaysia Bharu: This is what I don't understand. How do Shafie and Mukhriz suddenly creep into this new equation? And how do they draw a parallel between Mukhriz and Anwar as DPMs? Is that not insulting, amounting to a slap on PKR and Anwar?

Shafie is, in fact, a self-proclaimed outsider as he only works with Mahathir and now Mukhriz, and nobody else. What would be the fate of PKR, DAP and Amanah if he takes over?

Are Malaysians to believe that this potpourri of rank outsiders that came calling on a crutch to Harapan can be trusted to take us back to the promised land as what they promise?

Save Our Currency: Putting Mukhriz into the game plan is equivalent to Mahathir himself remaining in the formula, though he says he backs out. What a sham of politics.

Mvarughi: This seems to be the best option going forward. Although we want Anwar to take over, as it stands, the gap is too big and there is practically no chance he can get the numbers to mount a challenge to PN.

Shafie as PM, with Anwar as deputy, would be a good combination. Shafie would be able to get the numbers based on the fact that many outside Harapan and Warisan in Sabah and Sarawak would be willing to support him.

Having Mahathir and Mukhriz supporting this would also be crucial, going forward, as the Bersatu faction can re-group and align itself with Harapan Plus and grow the Malay base in preparation for GE15.

BlueFish0451: This proposal proves that Anwar is right to reject being DPM to Mahathir because, up until now, Mahathir is still denying Anwar his rightful premiership. Never has he endorsed Anwar, not even once.

Now, imagine Anwar as his deputy as proposed earlier. Wouldn’t it be easy for Mahathir to chop Anwar to pieces? I now believe that Mahathir was asking for another six months to finish Anwar off. Prove me wrong.

Vijay47: Am I supposed to be finally glad and relieved that a conclusive decision has been made? That the uncertainties of the last many weeks have at last been resolved? Or has it? Or have they?

The only thing I know for sure is that our politicians cannot be trusted, whatever coat-of-arms they wear. They make pious speeches about leading the country towards solving the Covid-19 attack, only to jump onto the next bus that comes along, the one with better cushions.

I don’t really care who is going to be the next prime minister. I only hope that he does not dip his hands into the till as much as recent ones have. I certainly do not expect a Mahatma or a Tunku, I can only pray it is not Najib Razak again or another Mahathir Mohamad.

So the trio is supposedly Shafie Apdal, Anwar Ibrahim, and Mukhriz Mahathir. For all I am bothered, it could be Larry, Moe and Curly Joe. Would it really make any difference?

I imagine Shafie is the anointed one because he, perhaps, is more acceptable to the various warring factions within Harapan. But why two for number 2? Was it a final thrust of the dagger into Anwar?

Mahathir, your patriotism, nationalism, altruism and the whole nine yards would have been more evident if the three did not include number 3 (Mukhriz).

Mat Md: It is doubtful whether the proposal to choose Shafie as PM will work without the agreement of Anwar. Even if Anwar agrees, could Harapan attract enough MPs to jump ship to topple PN?

It is possible, owing to its frustration for being rejected as PM-in-waiting, Anwar will break away with Harapan and join PN.

Another factor to consider is - if Prime Minister Muhyiddin Yassin fears that he is in imminent danger of being toppled, he would request to dissolve Parliament and call for snap polls. PN chances of winning big in the election are high.

Consider all these factors deeply before rushing headlong to plan something which is not feasible.