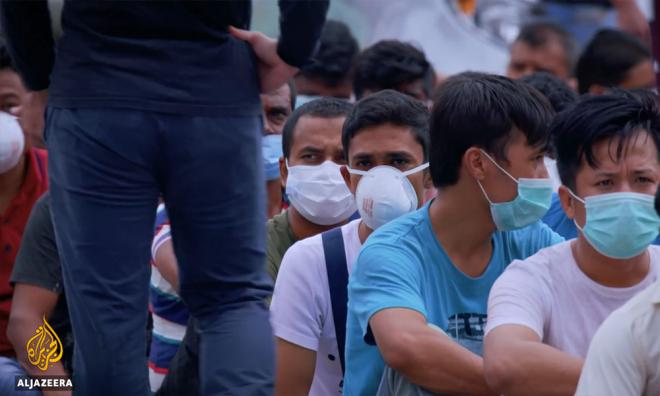 YOURSAY | ‘Don't be too blind to defend this nation when there is some truth in the allegation.’

S Kumar: What patriotism, Bernama TV host Herleena Pahlavy? With your kind of language, you are tarnishing the image of this country.

We expect people like you in such a profession to be well-mannered. Hurling rude remarks does not set a good example for the people in your profession. There are gentler and better words to "shut up".

But first, you need to know the facts behind the Al Jazeera documentary. Is it true?

You are a Malaysian and you must be well aware of how immigrants are really being treated here.

There are only a handful of employers who treat foreign workers as humans and with respect, as these employers understand that the foreign workers are here to help fill the many vacant posts and contribute to the development of this nation.

The foreign workers help themselves and at the same time help this country.

You can't be so clueless as not to know the number of employers treating their foreign workers very poorly in this country and the number of torture and abuse cases.

Don't be too blind to defend this nation when there is some truth in the allegation. If you believe in God and if you are a God-fearing person, then do have a heart.

Visit the detention camps and you will know the truth first hand.

Pokokelapa: Al Jazeera is an international award-winning news organisation. Name-calling does not bode well for yourself and Bernama. It’s unprofessional.

Be tactful when you address issues. Hit them with facts.

What fear are you talking about? Emotions like this must not be shown while presenting news. It shows your weakness.

Our local TV newscasters try to mimic foreign news anchors. Attacking others by calling them names only makes one looks like an imbecile.

If you want to teach them, then you must come out with counter-arguments.

Rupert16: What a lame excuse by Herleena. To be patriotic, one does not need to be rude or to use harsh words.

If anything, one can get a more powerful and persuasive message across by showing facts and figures without being ill-mannered.

Dummies Dhimmi: Please don't give a bad meaning to the words “fearless” and “patriotic”.

How fearless were you when you never questioned the massive corruption in this country on TV?

How patriotic were you when billions were stolen and you turned a blind eye?

AT-SIXX: “Fearless” and “patriotic” means doing your own fact-checking and fearlessly reporting an issue even if the authorities are implicated.

Find the truth and reveal it because you love this country. Fight others with facts that you uncover.

You are misguided by thinking that it is patriotic to insult someone’s reporting. It isn't, dear.

FairMalaysian: Patriotic? What about professionalism? Herleena, this is not your own TV show. This is Bernama TV that represents the voice of Malaysia.

And the way Herleena registers her patriotism smacks of arrogance. There are a thousand and one ways to show your patriotism.

Myviews: Indeed, name-calling is not patriotic. It only reflects your poor education and upbringing. It also brings disrepute to our country.

Raja Chulan: Al Jazeera had presented its documentary. If any party does not agree with it, just go ahead and present yours. Let the people decide which side to believe.

Why harass and name-call Al Jazeera? It’s so obviously childish, isn't it?

MA: I do not share the views of this anchorwoman. As a news reporter, you need to be unbiased, unemotional, and objective in your reporting. You carry the news as it is heard and told.

You have no right to share your personal opinions together with the news you carry. There’s nothing patriotic about this act.

What A Mess: If you are patriotic, prove Al Jazeera wrong instead of calling them names. Name-calling is not patriotic and not our way of life.

As an anchorperson, take Al Jazeera to task - prove them wrong with your own investigative reporting.

SapphireTiger8312: "It (Al Jazeera) claimed to have sought the responses of Defence Minister Ismail Sabri Yaakob, Home Minister Hamzah Zainudin and their deputies, prior to airing the report. However, their requests were allegedly not entertained."

So, the rules of journalistic balance were followed.

Donkey Trump: Instead of going after Al Jazeera, its journalists or the poor Bangladeshi interviewee, why not go after the person responsible for bringing the undocumented migrants into the country? We all know who he is.

If the immigration director-general feels the documentary was slanted in the government's disfavour, why not call up Al Jazeera and have them interview you?

You have a channel to put forth your side of the story and I am sure they will welcome you with open arms.

By going on the offensive in this manner, it only shows that there is something to hide.

Remember, there is no smoke without fire.

Gaji Buta: In my opinion, this episode would not have happened if the government did not overreact on the Al Jazeera report.

Your actions have consequences. So keep this in mind when making biased, prejudicial, or racial statements against your opponents and the minorities.

Some fanatics need only a bit of fuel to get ignited.