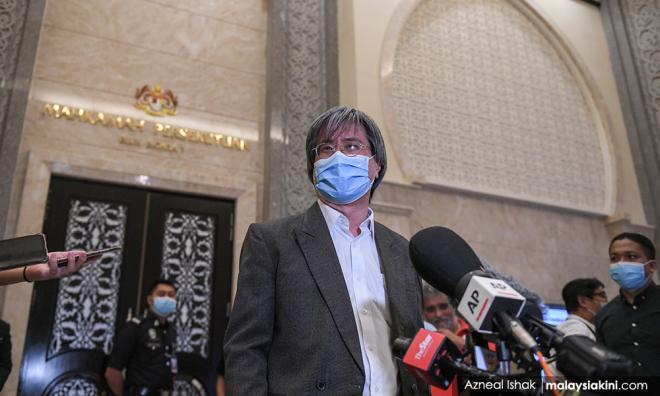 The Federal Court will hear the contempt of court proceedings against Malaysiakini at the Palace of Justice in Putrajaya tomorrow, which could see the independent news portal being slapped with a fine or its editor-in-chief Steven Gan jailed.

On July 2, a seven-member bench of the apex court dismissed Malaysiakini's application, filed by its operator Mkini Dotcom, to set aside the leave granted to Attorney-General Idrus Harun to initiate the contempt proceedings.

Gan, who co-founded Malaysiakini together with chief executive officer Premesh Chandran in 1999, vowed that the portal would vigorously fight the contempt charge.

“We hope for the best. At the same time, we are prepared for the worst,” said Gan (below).

Idrus had initiated the contempt proceedings over five readers' comments in a Malaysiakini news report published on June 9 which have since been removed.

The attorney-general argued that the comments had “scandalised the court” and caused an erosion of public confidence in the judiciary.

Court of Appeal president Rohana Yusuf, who led the seven-member bench in dismissing Malaysiakini's application to set aside the matter, said Mkini Dotcom had facilitated the publication of the readers’ comments.

“We are of the view that (Malaysiakini) had published the comments and that a prima facie (case) had been made out. Evidence revealed that editors of (the portal) review postings (of comments) on a daily basis.

"Looking at the nature of the impugned comments which implicate the judiciary as a whole, and the chief justice of the Federal Court, we are of the view that this court is the right forum to commence these proceedings,” she added.

The court also ordered both parties to refrain from making comments on the matter - which has prompted various organisations, both in Malaysia and abroad, to express concern over the implications of the legal action – until the day of the hearing.

During the setting-aside application, Malaysiakini's counsel Malik Imtiaz had submitted that the law does not require news organisations to pre-moderate and censor comments by readers on their websites.

Pointing out that some 2,000 comments are posted daily on Malaysiakini, he said the portal relied on its readers to flag offensive comments which would then be subjected to a moderation process.

As for the five comments which were the subject of the contempt action, Malik said the defendants had removed them within minutes of being informed of the matter by the police.

He argued that Malaysiakini should not be held responsible for comments made by readers and the attorney-general needs to prove that the respondents "knowingly published" the comments.

Premesh said that Malaysia has benefited from a more diverse media environment over the past 20 years.

“Those in power today have also benefited, with the media playing a key role in holding the former PM to account for the 1MDB scandal. Whatever happens, Malaysiakini will continue to report in the public interest.”

It is possible that a decision could be delivered immediately after lawyers have completed their submissions, which may take the whole morning.

Should Malaysiakini and Gan be found to be in contempt, sentencing could be handed down on the same day. There is no legal limit to the penalties for contempt of court.