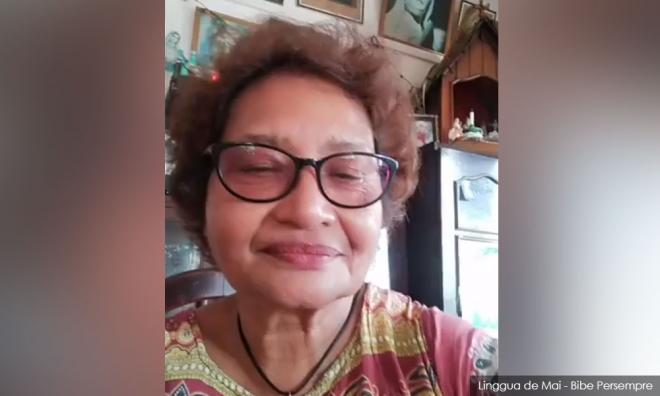 MALAYSIANSKINI | The close-knit Portuguese settlement situated by the sea in Ujong Pasir, Malacca, is famous among both tourists and locals alike for its food at the Portuguese Square.

During their festivals, song, dance and cheer line the streets of the settlement, and the Portuguese Square is coloured by decorations and string lights while people wander the streets in camaraderie and joy.

But there is one aspect of the Malaccan Portuguese culture which has often been overlooked - its unique creole language known by many names but mostly referred to as the Papia Kristang language.

Now with only about two thousand fluent speakers of Kristang remaining worldwide, 66-year-old Philomena Agnes Singho (above) is determined to ensure the language not only survives but flourishes, especially among her community.

In pursuit of this, Singho, who has lived in the Portuguese settlement in Malacca since 1957, has worked on various initiatives with the Malaccan Portuguese-Eurasian association in collaboration with Universiti Malaya (UM) to help promote the language.

This included a collaboration to publish a book titled "Beng Prende Portugues Malaka" (Come, Let’s Learn Portuguese Malacca) on Kristang as well as an online dictionary of the language "BibePortMal" available as a mobile app.

Singho noticed that they received many messages from people who said they had purchased the book when it was published in 2016, but the feedback generally stopped at that.

Concerned that people were just buying the book and leaving it to collect dust on their bookshelves, the former English teacher decided to find her own way to further push people to learn the language.

She launched the "Linggua de Mai – Bibe Persempre" Facebook page where she posts a short video of herself daily, teaching a word of the day and speaking in the Kristang language.

Today, over 1,000 people follow her daily updates where she teaches phrases like "pasa trabalu" (to undergo hardship), "sumana pasadu" (last week) and "bai pas" (to get along with).

This is Singho’s story, in her own words:

WHEN THE PORTUGUESE CAME OVER in the early 1500s, they did not only bring their spices, vegetables and fruits. They also brought their language.

When they stayed behind in Malacca and married local women, they inculcated their language into us. We are the descendants of those people.

It is still very much in use in our lives until today.

I tell you, it is very vibrant here, especially in the Portuguese settlements.

I LOVE THIS KRISTANG LANGUAGE. If a language is not used, it dies. Now the younger generation, many of them do not know how to speak or write this language.

In modern times, parents are very busy and do not have time to teach their children.

Parents converse more in English or other languages, so the children are left to wonder. When we speak to them in Kristang, they are a blur to the youth. If this language is not projected to the younger generation, it will die.

My small part is to follow-up by doing videos every day on the language, so not only Malaysians but people all over the world can learn it.

IT IS IMPORTANT BECAUSE THIS IS STILL A LIVING LANGUAGE, a living culture that is slowly dying. If nothing is done, it will die. In my own way, I want to preserve it, to reach out to people for them to know and to be interested in the language.

The book has given us the anchor, the first step to preserving Kristang. Without this book, the language would fade away. Unfortunately, it is happening because young people are not interested in the language.

But (with this Facebook page) when I get the responses, people are excited. That gets me going. They text me in private to ask me how to say a word or something like that.

WE CALL IT 'SAUDADI', a longing for the settlement, so they (Kristang people who have moved away) come back (to the Portuguese settlement) but only during festivals.

They are away from home, and they seem to have forgotten their language so when they see my page, they are excited. They said it is something from their younger days.

They say it brings back memories for them because their parents used to speak it in the house when they were younger.

In a way, I am happy it is not dying.

WHENEVER I SEE THE YOUNGER GENERATION here, I will speak to them in Kristang and always encourage them to speak, even if it’s wrong.

Yes, there is now a positive upbeat on this language from the younger generation. It is still hard work, we have to capture their attention.

I do videos because the videos will live on even for future generations.

WE NEED A BODY IN THE VILLAGE itself to promote the language. We need it to go out and do physically promotions for the language and maybe spend some money on advertising, but unfortunately, it is not happening.

(For example) the Festa San Pedro, people come once a year for the dance and food. They, however, only listen to Kristang when people are singing and dancing, but most people don’t know what’s being spoken.

Nobody is giving classes to the children where it is open to the community. Even if you want to have classes, you have to pay for it.

I am the only one volunteering my time for free (to post videos teaching the language).

THE PEOPLE OF PORTUGAL APPRECIATE IT because it is old Portuguese.

It was brought to us in 1511 by the Portuguese who came here (to Malacca), it has been preserved and is still in use by us (the Kristang community).

Many Portuguese are amazed when they watch (my videos), they said they do not understand. The younger ones have questioned me, and I tell them your modern Portuguese has been modernised with English.

This is what we call Portuguese antigu (old Portuguese), and it is still used, especially in Portuguese settlements in Malacca. If you walk down the road here, you can still hear people conversing in this language.

So before this disappears, with the efforts of UM and our own, we are returning it to the people.