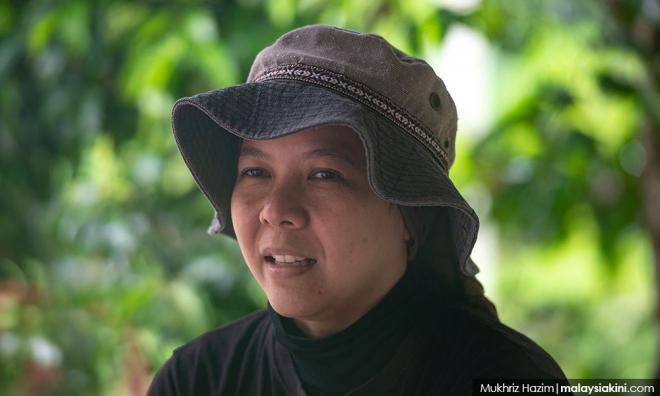 MALAYSIANSKINI | Roughly the size of a macaque, with agile limbs and endearing white-rimmed faces, gibbons are known as Malaysia’s swinging, singing small apes.

Unfortunately, these distinctive features have also made the wild animals sought-after pets and a target for poachers.

Driven by a demand fuelled by social media and celebrity ownerships, gibbons can fetch up to RM5,000 per baby on online marketplaces.

What is often concealed during these transactions is an estimated 20 gibbons will have to die for one baby to reach the hands of a buyer, according to Mariani Ramli.

Known simply as "Bam" to her friends, she runs the Gibbon Rehabilitation Project (Grep) - a sanctuary that rescues gibbons from captivity and rehabilitates them for an eventual return to the wild.

She also operates the Gibbon Conservation Society - an NGO dedicated to supporting the sanctuary’s work and raising alarm on the need to stop the illegal gibbon trade.

Her work has made her unpopular, to say the least, with poachers.

For that very reason, Bam has tucked her sanctuary away from plain sight in the Pahang jungle.

It is the sole gibbon rehabilitation centre - and the only such facility for any species of wildlife - in the country.

During a visit to the sanctuary in February, Malaysiakini witnessed as Embun - the youngest resident - was led by a volunteer to play in an outdoor playground built especially for her.

Shy but curious, the three-month-old gibbon (below) would partially hide behind a tree at the sight of visitors.

Like Embun, most of the 11 other gibbons at the sanctuary were rescued as orphaned babies, Bam told Malaysiakini in an interview.

Rangga, for example, was just eight months when she arrived.

“She kept on looking for our earlobes because she wanted to suck on her mother’s nipple. Her parents had been killed,” Bam shared.

When poachers hunt for baby gibbons, they first identify the apes in the jungle by their distinct song. Once they have identified a target, they will take aim at its family members to prevent them from protecting the infant.

“The father will go first, then the siblings and lastly they will shoot the mother.

“Sometimes, the baby will die or get injured when the mother and baby fall to the ground,” she said.

VIDEO: The fading song of the gibbons in Malaysian jungles Part 1

Once poachers successfully obtain a baby gibbon, Bam said it will usually be stashed away in a box or bus cargo and transported clandestinely to an agreed-upon location. Some do not survive the journey.

This is despite it being a crime to hunt, sell or own gibbons.

Under the Wildlife Conservation Act 2010, anyone who hunts or keeps baby gibbons without a special permit can be fined up to RM200,000, jailed up to 10 years, or both.

“The gibbon’s cuteness makes it a threat to its own existence,” Bam rued.

Flipping through case files on each of the gibbons under her care, she shared how she often found gibbons kept in tiny cages during rescue missions.

Some would poke or over-groom themselves. Others would rock themselves repetitively from side-to-side, reaching out their hands for food when they see humans.

According to Bam, these are all signs of zoochosis - abnormal behaviour exhibited by animals caused by time in captivity.

At the sanctuary, Bam tries to reverse zoochotic behaviour by building towering enclosures with poles that mimic tree branches. Gibbons are arboreal creatures - which means they live above ground on trees.

She also keeps human contact to a minimum to reduce their familiarity with people.

During feeding, only two people are allowed to go within a visible range of the enclosures at a time. Gibbons who have made the most progress, meanwhile, are kept in a different area and not allowed any visitors aside from sanctuary staff.

During Malaysiakini's visit, gibbons were observed swinging confidently around their enclosures playfully and making whistling noises.

These are positive signs, Bam said.

However, despite the progress, she shares that no gibbons have been released into the wild since she started the sanctuary seven years ago.

Rehabilitation, which the centre focuses on, looks at caring for individual animals. This is opposed to conservation, which looks at what can be done for the entire population of a species.

Rehabilitating a gibbon can take up to a decade, and guidelines by the world’s authority of nature conservation - the International Union for Conservation of Nature (IUCN) - stipulate seven criteria before a gibbon is considered to be ready for the wild.

These include a reduction in zoochotic behaviour, a proper body clock, finding a mate, successfully raising two offspring and most importantly - to be singing again.

Singing is an important survival tool for gibbons - it is their way of attracting a mate and marking their territory.

The species is also known to be picky with finding a partner, as they are monogamous and mate for life.

Bam’s sanctuary was last audited by IUCN in 2018, and they operate under a certificate issued by the global body. The centre also has a government permit to keep wild animals.

A home carved in two

Malaysia is home to five out of 20 gibbon species, and all five are listed on the IUCN Red List of Threatened Species.

Despite their endangered status, there is a dearth of data on their exact numbers in Malaysia.

This suggests that their numbers could be far less now that the small apes are being poached and sold online as pets.

Aside from the illegal wildlife trade, another major threat to gibbon survival is deforestation.

Unlike other animals, Bam shared that gibbons typically do not migrate from their territories.

As arboreal creatures, neither do they venture down for food as the ground contains bacteria that are harmful to them.

Bam said deforestation affected the species by fragmenting their homes and preventing them from being able to forage for food.

“Let’s say you cut trees and make a highway in the middle of their home in the jungle. You will be cutting through their home, like separating the living room from the kitchen.

“There are cases where gibbons are forced to cross the road, risking their lives every day, just to eat. Because their kitchen is on the other side of the road,” she explained.

From her personal anecdotal experience, Bam said she has not heard the gibbon’s song in local jungles in recent years.

VIDEO : The fading song of the gibbons in Malaysian jungles Part 2

During the interview, Bam shared that she had two new gibbon rehabilitation sanctuaries in the works - one in Pahang and one in Sabah.

Both will be on large swathes of land, and she plans to establish a public education centre at the Pahang facility.

However, the change of government in March and subsequent Covid-19 pandemic have since thrown her plans in the air.

Like many NGOs during the movement control order (MCO), Bam had to make several public appeals for donations. She has also called for interns to help run the sanctuary.

Whenever faced with challenges, Bam reminds herself of why she began rescuing gibbons in the first place.

Back when she was a Wildlife and National Parks Department (Perhilitan) ranger, she had been put in charge of her first gibbon, Alec. He had been surrendered after his owner gave up looking after him as a pet.

Alec's untimely death was what spurred Bam to dedicate her life to rescuing and rehabilitating gibbons.

She later quit her job, sold her belongings and took a trip to the Gibbon Rehabilitation Centre in Phuket, Thailand to learn the proper techniques before setting up her own sanctuary.

“The first time I set foot at that centre, I heard all the gibbons singing.

“I felt something in my heart then, like something had moved in it.

“One day, I want all the gibbons to be singing like this in Malaysia,” she said.

Grep is looking for participants for its four-week internship programme. Enquiries can be made through their Facebook and Instagram pages. Applications can be made here.

Coming back from the brink of hell