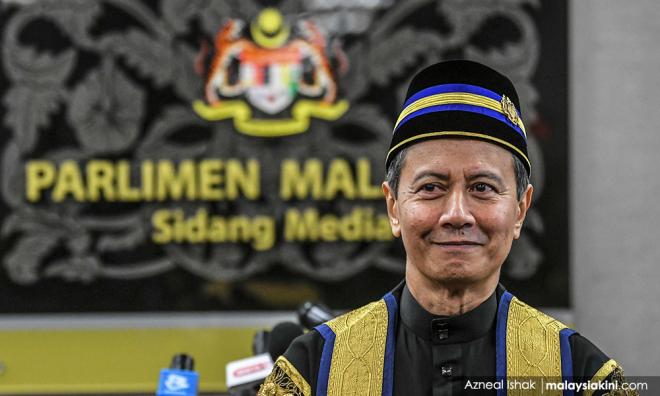 YOURSAY | The Art of taming the circus in Parliament

YOURSAY | 'I watched the parliamentary proceedings for a short while and then stopped watching, disgusted with…'

It was ironic, considering that the person asking the question was himself was dark. The new House speaker (Azhar Azizan 'Art' Harun) failed in his duty to chastise Abdul Azeez.

I watched the parliamentary proceedings for a short while and then stopped watching, disgusted with the raucous behaviour of parliamentarians who were aware that the proceedings were being televised.

What hope can we have for our future? Removing a speaker who had performed his duties in an exceptional way was bad enough.

The Wakandan: Azhar should know very well that his appointment was bulldozed through and therefore not legal.

If he has a conscience, it should tell him the right thing to do. Maybe he is afraid that he may lose and after resigning as Election Commission chairperson, he would be left with a duck egg.

It is with regret that he failed to make a ruling on an unparliamentary word and that indeed makes him very controversial, if not stupid. He should discharge his duty as a speaker and that is to make a ruling. There have to be law and order, even in Parliament. Otherwise, what is a speaker for?

However, more importantly, what kind of a standard that our speaker and Parliament have? Don’t we have any pride in doing the right thing? Don’t we care what international communities think of us?

Weird Weirder: “At the time, those who made it apologised and withdrew the remark, but I hope in the future, there will be no sexist remarks again in the Dewan," said Azhar.

Why he didn't say it during the parliamentary sitting and only to the press later? He should have made his stand then. There is no room for racist or sexist comment. Period.

VisionX: The former speaker (Mohamad Ariff Md Yusof) was dignified and fair and commanded respect from both sides. Azhar needs to take a leaf from him. Be firm and stern. The minute the MPs feel he is lopsided in his ruling, he will never gain the respect of the House.

Apa Ini: It was their first day in Parliament and we can see clearly that the removal of Ariff was politically motivated, as was the appointment of the new speaker and his very unpopular deputy.

I cannot understand Azhar; there was so much respect for him in his previous appointment as EC chief. Why take on this new post where he is seen only as an appointee of a backdoor Malay-centric government?

Ruslan Bahari: How quickly Azhar has turned. A lawyer by training  too.

If he says he won't act controversially, then why was he saying that whatever Azeez said was "open to interpretation"? Lawmakers can now use this to hide responsibility from their statements.

Kim Quek: The fact that there is only one nominee for the position of House speaker and his deputy does not exempt them from going through the voting process.

As there is no guarantee that every MP who had voted earlier in favour of the removal of speaker Ariff would support Azhar as the replacement speaker.

The proper process is for the House to invite nominees for these two positions after these had become vacant.

And judging from the razor-thin margin by which the motion for removal of Ariff had scraped through, it would have been entirely possible that if the motion proposing Azhar as the new speaker had been put to a vote, the motion might not squeeze through the delicately balanced House.

Hence, both Azhar and Azalina are deemed to have been illegally appointed, and both should vacate their positions to pave the way for the new speaker and deputy speaker to be properly elected in accordance with the rules of the House.

Hang Babeuf: "The proper process is for the House to invite nominees for these two positions after these had become vacant."

Exactly right! And even if there is only one nominee, that person must be voted in, affirmatively. There must be a vote.

People may choose to vote for, to abstain or to vote against. But there must be a vote - you cannot just walk into the speaker's chair and sit down, without a vote.

The long-standing parliamentary tradition, of course, is that the new speaker, to be installed, must be grabbed and wrestled into the seat by members representing both (or all) sides of the House - in a symbolic display of both his/her reluctance to serve and of resistance to accept the difficult responsibility of that position, and also of bipartisan support for his/her installation - signifying the legitimacy of the new tenure of the seat and an (at least initial) readiness on both/all sides to accept the speaker's management of the House.

What an absolute shambles! It has now come to this. It never should have done so. The damage done today to Parliament and democratic constitutionalism is probably irreparable. Not just totally regrettable but also totally unnecessary. What folly!

Apanakdikato: The disgusting and totally undignified conduct of MPs from both sides of the fence is yet another clear indication that Malaysia is a failed state.

It is even shocking that racist and sexist slurs can be freely hurled in Parliament. There was not even any sign of intellectual discussion. These go to show that MPs in Malaysia are not interested and capable of nation-building.

Getting into politics seems to be a pathway for power and money, not a duty to the country. At the end of the day, it is the voters themselves who should be blamed for putting these self-serving and incompetent group of people in Parliament.

As former Singapore prime minister Lee Kuan Yew once said that any government can only be as good as the people who choose it. Indeed, it is "gelap", for dark days are ahead of Malaysia.

Lionking: Well, we are now a developed country. The speaker is definitely a class of his own. I am not sure which class…