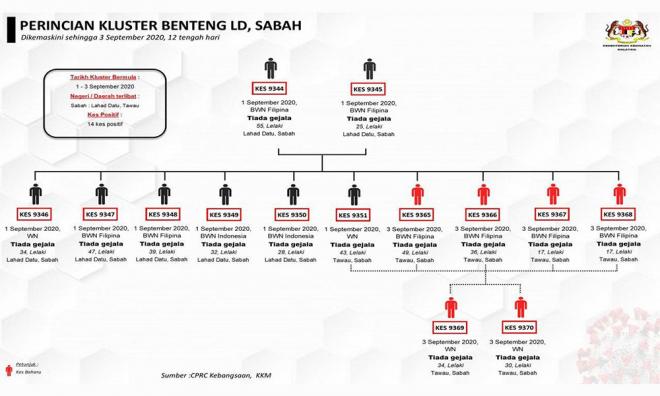 COVID-19 | Malaysia has reported 14 new Covid-19 cases in the 24-hour period up to noon today, of which 10 were locally acquired infections.

The majority of local infections were part of the Benteng LD cluster in Lahad Datu, Sabah, comprising two Malaysian nationals and four foreigners.

The cluster was first reported on Sept 1 among detainees at a police lockup in Lahad Datu.

He said further investigations revealed that one of the lockup detainees (Case 9351) whose case was reported on Sept 1 turned out to be a prisoner at the prison.

“He has a history of being detained at the Lahad Datu district police headquarters lockup for a case mention, where he came into close contact with both index cases for this cluster (Case 9344 and 9345).

“Six new cases reported today were from Tawa prison. Four of them also have a history of going to IPD Lahad Datu and have close contact with the index cases.

“They went back to Tawau Prison on Aug 28 and went on to infect two new prisoners at Tawau Prison. All these new cases did not show symptoms and were admitted to Tawau Hospital,” he said in a statement today.

Noor Hisham added that one case previously reported on Sept 1 was found to be linked to the cluster, bringing the total number of cases in the cluster to 14.

He said 336 people have been tested for Covid-19 in the cluster so far, including prisoners, prison staff, police personnel, and their family members.

Of these, 123 have tested negative and 199 tests are still pending.

Meanwhile, in Kedah, four new cases have been reported.

Three of the new cases were from the Tawar cluster, while one was from the Telaga cluster.

Two of the Tawar cluster cases - a 61-year-old woman and a one-year-old boy - were detected through the screening of residents living under the targeted enhanced movement control order in Amanjaya.

Another is the four-year-old daughter of a Case 9146, who is a healthcare worker at a private hospital in Sungai Petani. She is the fourth child in Case 9146’s family to become infected.

The Tawar cluster is linked to a funeral held in Baling on July 31 and Aug 1, while the Telaga cluster was first detected when a healthcare worker at Hospital Sultanah Bahiyah tested positive for the disease, although the infection is believed to be community-acquired.

For the Tawar cluster, 18,164 people have been tested so far, of which 78 tested positive and 137 tests are still pending.

For the Telaga cluster, 2,089 people have been tested, of which seven tested positive and 680 tests are still pending.

Two new cases have also been reported in the Bunga cluster, which is isolated amongst crew members aboard a ship in Port Dickson, Negeri Sembilan.

They are classified as imported cases originating from Singapore, with six cases in the cluster so far.

Overall, the total number of Covid-19 cases in Malaysia has increased to 9,374.

Four patients recovered from the disease today and have been discharged, leaving 163 cases still active.

The number of patients in intensive care units or requiring ventilators remains unchanged, with four cases and three cases respectively.

The death toll is also unchanged at 128 cases.