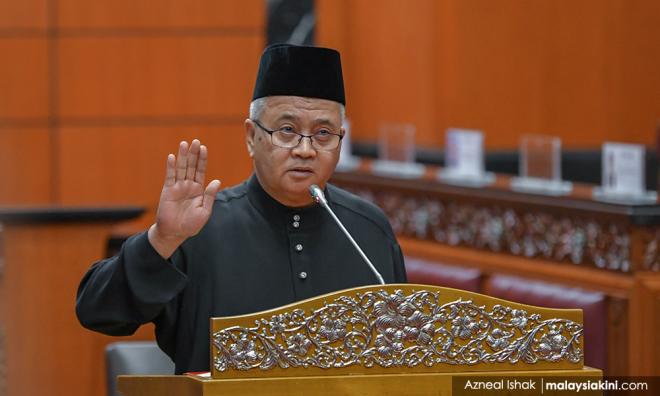 YOURSAY | 'Whatever the accusations and counter-accusations, it is of little significance now.'

The Wakandan: What’s being disclosed by Dr Mahathir Mohamad and his former sidekick (political secretary), Muhammad Zahid Md Arif (above), is their personal secret.

It is interesting for the interested that they are throwing mud at each other in public. From the various reactions, it is also noted that by this time, many people are not interested anymore.

Perhaps that shows Mahathir has become more and more irrelevant. That is sad for those who worshipped him before, but the reality is that he has lost credibility despite there being people who still want to put faith in him.

It’s a big lesson - no matter how vital one is to the public and nation, losing credibility due to dishonesty will eventually bring you down. It destroys you.

Regardless of Mahathir’s denial, the fact speaks for itself. Mahathir’s rejection of PKR leader Anwar Ibrahim was very clear when he played former PKR deputy leader Azmin Ali against Anwar.

He did not say it but for a smart and shrewd person like him, he knew what he was doing, but more importantly, people knew what he was up to - he was sabotaging Anwar to stop him from being the prime minister as agreed.

So, Mahathir, you made a good effort in defending yourself, but it’s too little and too late. The damage is done, Harapan fell, and you should be happy (smiling?).

The mystery was, why did Mahathir join Pakatan Harapan, knowing very well that Anwar was the leader of the coalition?

We can only guess. However, it would be consistent with Mahathir to say that he did not want Anwar to be PM. Yes, he also wanted to bring Najib Abdul Razak down, but he just did not want the alternative, that is, for Anwar to lead the nation as PM.

It’s either he being PM or Harapan be destroyed. He got both.

Existential Turd: Mahathir may be technically right though. Who can prove he is the happiest man after Sheraton Move? Maybe he is the second happiest man.

What he said are all technically correct, you cannot accuse him of lying. But, none of it amounts to a molehill.

Like a weather forecaster who says there will be rain somewhere in Malaysia tomorrow. Yeah, 100 percent correct, but entirely useless.

Fernz: Well, I believe the ex-aide. Mahathir is into half-truths. Half-truths are even bigger than outright lies.

It's clear that Mahathir is against Anwar being the PM. He will disguise this by lying through his teeth. Mahathir wants only his party, no matter how small, to hold the PM's post.

Harimau_Arif: This is the classic case of the pot calling the kettle black. Mahathir is the one who backstabbed Anwar and many others.

Now, he’s getting a taste of how it feels to be backstabbed multiple times. I’m not even counting all the voters who believed he’s a changed man out to make amends. Just go away, Mahathir.

Malaysia Bharu: Fallout among plotters, backstabbers and facilitators? There is no smoke without fire.

Whatever the accusations, counter-accusations, denials and name-calling, it is of little significance now as the betrayal of Bersatu frogs and PKR rebels is by now history in that the legitimate mandated government has been superseded by the backdoor regime of rebels, defectors and losers at the polls.

Regardless of the many allegations thrown his way, Mahathir has lost all credibility due largely to his own questionable behaviour and actions.

There are many instances he has contradicted himself. He is a confused man consumed by his own delusions and failures.

The people that gave him Putrajaya on a platter the second time have distanced themselves, leaving him in isolation. His pontificating claim of innocence, or what he does in the future, is of little consequence to the rakyat.

Mazilamani: For the first time, the truth was spoken by Muhammad Zahid and he is now being called the “biggest liar”.

What to say of someone who has been harbouring something in his heart and mind, and saying something else instead, and making the whole country believe that his intentions are noble and selfless.

I would rather believe Muhammad Zahid than Mahathir.

Ferdtan: Again, Mahathir did not blame Azmin as one of the conspirators. Why? Azmin orchestrated the takeover of the Harapan government and yet he gets no blame?

He (Azmin) even got the prime minister's wife's teary hug when it was announced that Muhyiddin Yassin was named as the PM-to-be, saying, "You worked so hard."

Why? That’s a million-dollar question. Why is Mahathir so 'careful' in not attacking Azmin? Has he got something that Mahathir does not want him to expose?

Longyan Ren: A million-dollar question, indeed! It has been quite a puzzle to me, too. Why did Mahathir not blame Azmin, whom I consider the most treacherous character in the Sheraton Move.

He so openly schemed against Harapan, PKR and Anwar, most likely with Mahathir's encouragement, tacit or otherwise.

I think if Mahathir were to attack Azmin, the latter would probably spill all the rotten beans (whatever that might still be kept away from the public) on Mahathir.

Who is lying here, I wonder? I think we know the answer.

COMMENT | Of Dr M, his ex-aide and politicking in the Senate