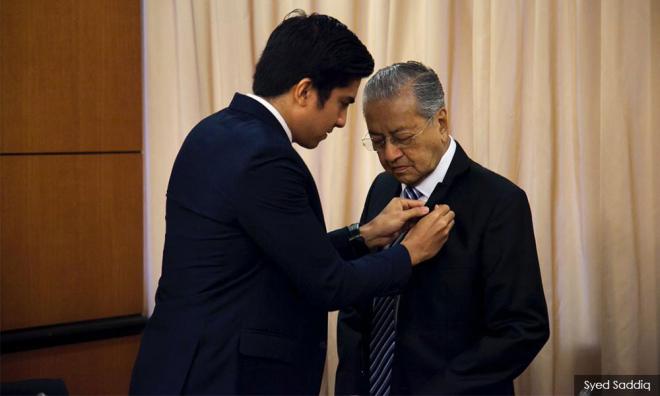 YOURSAY | Dr M vs Syed Saddiq – zoomers are the future

YOURSAY | ‘The world belongs to the young, not the old who can't change.’

Too many in the older generations regard that only they have the wisdom and right to helm the country. They consistently use race and religion to divide the nation whereas the younger generation wants to unite all regardless of race, religion, creed, political affiliations or colour of skin.

It is time for Mahathir and his generation to recognise this and move on. The torch is now passed on to a new generation of leaders.

Syed Saddiq will find others from the younger generation in various political parties and movements who hold similar values and idealism, and who are multiracial, anti-corruption and community-minded. Do not hesitate to rally them to your youth movement.

It is important to have idealism but it is only through power that you can achieve real change in society. Power is not necessarily corrupt if leaders use it for the betterment and benefit of the rakyat.

Heron: Well said and way to go, young man. There are many Malaysians out there like you who have the dynamism and capability to bring about leadership and new strategies to lead the nation out of the disappointing and miserable political miasma of some three decades.

The opportunity cost has been rather daunting as is obvious nowadays. Young leaders like you are needed to alter the existing and unfortunately entrenched mindset. A mindset which focuses on winning the hearts and minds of a specific community by inferring inferiority within that community and animosity towards others.

This primary approach in communal politics has both suppressed the vitality of multiracial and multicultural vibrancy of our lucky country and also gave rise to exclusive groups of the newly rich.

If only our top leadership of the past three decades had committed itself to promoting and protecting the overall interests of the country and people instead of focusing on parochial and selfish interests and in fermenting communal disquiet for such purposes.

Like the young educating the old in computer literacy, the old must be made to relinquish their failed ways and means.

Ferdtan: Well said, Syed Saddiq. The world belongs to the young, not the old.

Not all old people think like Mahathir. It is obvious that he has his self-serving political agenda - to play on race to win. There are many senior Malaysians supporting you, Syed Saddiq (provided that you don't deviate from your planned inclusive agenda).

Change, change and change, it has reached the stage of "to do or die".

Whether Syed Saddiq succeeds or not will depend on his ability to organise his way forward. What is most important at this juncture - of increased race and religious bigotry with Umno holding hands with PAS to exploit the division among Malaysians for political gain - is the message that Syed Saddiq promotes.

Let that message ring out. This is the first step by a Malay leader who dares to call for inclusiveness.

Whether you trust his politics or not, PKR leader Anwar Ibrahim is the closest to what Syed Saddiq intends to do. Anwar once said: "Anak Melayu anak saya, anak Cina anak saya, anak India, Iban, Kadazan, anak saya." (The Malay children are my children, so are the children of the Chinese, Indians, Ibans and Kadazans.)

If Syed Saddiq can succeed better where Anwar can't, then "syabas" (congratulations) to him and the youth.

Siva1967: Syed Saddiq, this is a brilliant response to the old maverick. Mahathir has been playing the race card for far too long and with too much divisiveness.

An entire generation has grown from this Machiavellian period and has taken the country on a trajectory course of Malays versus non-Malays; East versus West Malaysian; haves against have-nots, us against them; my religion better than your religion and more.

There is also the “ketuanan” (superiority) mindset of Malays being the “masters” derived from various Biro Tatanegara sessions.

It is time to reverse all that and we, the older generation that failed to create a united Malaysia to hand over to our next generation. It is time that the next generation, the likes of Syed Saddiq, takes over the government (tactfully if you have to) and chart a better course for all Malaysian.

Remember today is the first day of the rest of your life, so without further delay, register your party. My boys and I will sign up.

Cogito Ergo Sum: Indeed, the future starts today. We are Malaysians and we want a better deal for all.

Syed Saddiq, you give hope to a nation plunged in darkness and hopelessness. Mahathir’s politics and race-based politicking were over a long time ago but he kept trying to jump-start it every now and then.

This patient is flat-lined and attempting to revive it is to create another Frankenstein. We don’t need another monster in a room full of them.

We wish you the best and will crowdfund your endeavour. Thanks for thinking of us as Bangsa Malaysia.

Honma: Syabas to Syed Siddiq. I hope your dreams to unite all Malaysians will be a success and to bring Malaysia to a greater height.

This will be the new normal unlike the old school of thought of harping only on a particular race and religion to gain self-popularity. I hope more Malaysian youths will jump on board.

To bring Malaysia forward and be progressive, we need to implement policies that will benefit Malaysia for all Malaysians.

JBond: Hats off to you as a young Malay leader who has not been tainted by Umno’s 60 plus years of racism, warlord culture, and greed which has brought our country to its knees.

Hopefully, the new path that you envisioned will be realised sooner before the society is further fragmented by race, religion and self-interests. Expect brickbats from established political parties which can be demoralising but we are behind you all the way.

Cascara: Syed Saddiq, you will have great support from Malaysians who are sick and tired of politically fuelled race and religious bigotry and the never-ending corrupt practices of politicians in power.

Let it be written in history that you were the one who extricated Malaysia from the jaws of total annihilation. I wish you success in your honest and genuine endeavours.

Hrrmph: We need more leaders of Syed Saddiq's ilk. To those jaded and aged, he may seem naively idealistic, but we should not allow the hopelessness of the last few years colour the years ahead.

If we find no hope in ourselves, let others shine the light. If it is the right path, we must support it. From the youth, we find optimism, and from optimism, we find ways to better our lives.

YOURSAY | Many boomers, too, are with Syed Saddiq