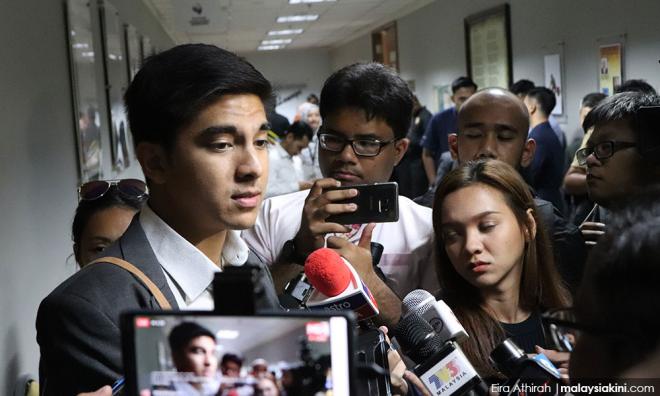 YOURSAY | Many boomers, too, are with Syed Saddiq

YOURSAY | ‘Now nearing 80, I hope to see this young man achieve his dream of uniting all M’sians…’.

Malaysia Bharu: Whatever is said about Syed Saddiq Syed Abdul Rahman, he has stood steadfast against the schemers and traitors in Bersatu and proven to be a man of conscience.

My best wishes to him in his new venture to spearhead a multiracial youth-centric political movement to unite Malaysians. This is something new in our outdated race and religion-entrenched political landscape in the clutches of decadent self-serving politicians largely passed their 'use by' date.

The biggest stumbling block to Syed Saddiq's noble mission is the likes of Dr Mahathir Mohamad. Youths are the way forward if we wish to salvage ourselves from a future of a failed nation headed in the way of racial and religious extremism.

It is my ardent hope that Syed Saddiq is given the greatest support by all Malaysians towards the success of his endeavour that will require arduous persevering effort. May God bless him.

Just A Malaysian: Malay politics is in the dumps and Syed Saddiq’s new approach is refreshing and much needed. Politics that is based on fear, division, and bullying will not get us anywhere. Perikatan Nasional (PN) represents the worse there is in any government.

World conflicts and turmoil starts with one group trying to dominate another. It never ever ends well with all parties losing. It is a negative-sum game.

Syed Saddiq, this beautiful country deserves a new start and it so appropriate for it to be started by you, a young smart Malay.

My generation and those generations before me are the ones who ruined this country. The young ones today still have a chance. They can do what we failed to do.

I support them. Not for myself. My generation will never see a fair Malaysia. It’s too late for us. I support them for my children and grandchildren.

Daylight: A young man teaching an old veteran the right way to think. What a relief for the future of the country to hear this young leader, but what a great shame for the old man who has cemented his racist views since the 60s.

BusinessFirst: I think idealism and hope for the future are what we need to counter all this racist and religious divisiveness. Press on, Syed Saddiq.

Change the future for the betterment of your generation and your children. Mine has certainly messed things up.

BluePanther4725: Well said, Syed Saddiq. It's time that you get away from this poisonous old man and save our youths from being poisoned by his crooked philosophy.

Politicians like Mahathir are unable to understand the concept of nation and country. His narrow mind can only harp on racism for his own survival.

I don't believe he even cares about the Malays; all this is a delusion created to safeguard his wealth and his cronies' power. Mahathir is responsible for splitting the Malays and Malaysians alike.

Coward: Syed Saddiq did not adequately explain his reason for hosting that bigot, Zakir Naik, who should have been deported and blacklisted long ago.

He gave his reason. However, it was very lame. He wants to draw a line under the whole affair and move on. I disagree with that but can accept this view.

The bigot most likely hasn’t learned his lesson. He had to keep his mouth shut because of all the pressure that Malaysians of all races and religions piled on him, so much so that his political protector dares not defend him.

At that point in time, asking everyone to move on was a big enough olive branch to that bigot which he totally did not, and still does not, deserve. So if Saddiq just left it at that, it would have been fine with me. Difference/diversity in opinion and all that.

However, by hosting the dinner he was inappropriately kind. It also makes his earlier call to deport the preacher hollow. This raised doubt in his principles and what he actually believes.

That black spot in his character will take time, a lot of time to fade. Unlike him, I am not willing to just "move on".

The future direction of the country will be in the hands of a leader like him, and what he did is not something I can just forget, even if it is ancient history. It will take time for him to repair the damage, but I am willing to give him the time.

So yes, by all means, let him do the good work. Give him the time and space to demonstrate that was a mistake.

As for harping on an old issue, that incident is part of his history and he will have to deal with it time and time again in his political career. In fact, this will strengthen his credibility as a leader if he successfully demonstrates that he realised his mistake and makes sure it does not happen again.

MS: Yes, if taken purely at face value, this statement by Syed Saddiq is commendable - as commendable as his initial chiding of that Mumbai preacher before hosting him for dinner.

So we simply have to ‘wait and see’. This, after all, is ‘politik Melayu’ where “things are seldom what they seem - skimmed milk masquerades as cream”.

AB Sulaiman: It so happens that I have written a book with the title ‘Ketuanan Melayu’ where I tried to analyse the human thinking norm. In it, I mentioned that the world of today operates on the platform of scientific thinking.

I went on to state that Syed Saddiq is a great example of this norm. Based on this, I tend to agree with the sentiments of many, even in this comment section. Syed Saddiq has the right mental frame to proceed with his vocation.

Fair&Unbiased: Young man, you have my vote. If you do not make it this round, don't give up. I will continue to vote for you each and every election.

I believe you have the virtues of a true statesman, a Malaysia for all Malaysians. I am sick of all the politicians who use race to divide and rule our country just to remain in power. Go for it, Syed!

Ipoh PP: Now nearing 80, I hope to see this young man achieve his dream of uniting all Malaysians and not Malays only.

Why unite on racial grounds? This is what Mahathir will always be. An ultra and seeing only one race as poor. He will go to his grave only having this one-sided view.

This country is for all of us. Help the poor of all races. That’s what needs to be done for the good of the country.

Clearwater: A youth-centric party would not necessarily exclude old people but it could make an exception in Mahathir's case because of his toxicity.

Syed Saddiq has obviously outgrown his one-time patron and mentor who is stuck in his groove playing the same old song.

YOURSAY | Dr M vs Syed Saddiq – zoomers are the future