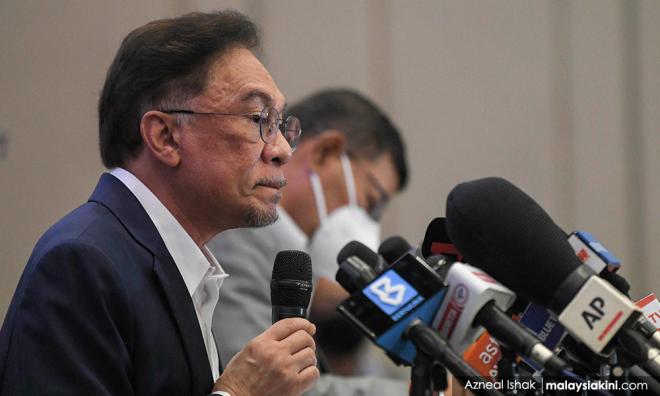 MP SPEAKS | Political events in the country are changing rapidly

MP SPEAKS | I was visiting the Sabah political shrine of Tambunan in Sabah when Anwar Ibrahim had his noon media conference in Kuala Lumpur, announcing that he had the numbers to become the prime minister of Malaysia.

I last met Anwar before I came to Sabah to campaign for Warisan Plus candidates in the Sabah state election when Anwar assured me that he was not contacting former Umno leaders like Najib Abdul Razak and Ahmad Zahid Hamidi, nor the PAS leadership, in the attempt to regain the people’s mandate, which was illegitimately robbed in the “Sheraton Move” conspiracy in February 2020 that toppled the 22-month Pakatan Harapan government.

I have been in Sabah since Sept 14 and have not been in contact with Anwar, and Anwar’s media conference yesterday was as much a surprise to me as to anyone else.

A lot of political undercurrents are afoot in Malaysia, and the Sabah election this Saturday, Sept 26, is only a forerunner to greater political developments at the national level.

It is no secret, for instance, that Umno leaders want a snap general election because they believe that with their tie-up with PAS, they are likely to regain control and even hegemony of the federal government, as well as the premiership.

They have scant respect and regard for Muhyiddin Yassin as the prime minister, who, I am sure, is politically astute enough to know that he will be the first casualty in a snap general election as nobody would support him as prime minister after a snap poll.

Even in Bersatu, there are other political leaders eyeing the PM’s post.

But political events are changing rapidly.

PAS leaders see themselves as 'kingmakers'

Umno may not find PAS so co-operative in its political machinations, because PAS leaders suddenly see themselves as “kingmakers” in the political arena, and their political choices are just not confined to co-operation with Umno, now that Muhyiddin and Bersatu are quite dependent on their co-operation for survival.

How political events will pan out after the Sabah election is very much an unchartered work-in-progress – with the outcome of the election an important factor in the cauldron of political developments.

The immediate task is to ensure that Warisan Plus can win, not only to form the Sabah government with Shafie Apdal as the chief minister, but to also produce an electoral victory exceeding two-thirds of the State Legislative Assembly majority to end the culture of political frogs, not only in Sabah but in Malaysia as well.

I visited Tambunan as I was shocked that Parti Bersatu Sabah (PBS) had surrendered Tambunan to Star, although Tambunan was the sacred birthplace of PBS.

I have said I am not a member of PBS, but I felt somewhat shocked and angry that the PBS leadership had gone so low that it was prepared to surrender its political shrine for the sake of a few State Assembly seats – which is a far cry from the great days of PBS in the 1980s.

In 1984, Joseph Pairin Kitingan (above) was forced to resign as state assemblyperson, forcing the holding of what was a historic Tambunan by-election, coupled with a Tambunan Declaration, where the ordinary voters of Tambunan became national heroes democratically opposing a most oppressive and cruel Sabah state government.

In 1985 and 1986, I championed Joseph and PBS inside and outside Parliament and I felt a sense of political shock and betrayal that the PBS leadership could surrender the PBS shrine of Tambunan to gain a few State Assembly seats in the 2020 Sabah state general election.

Joseph had two opportunities, firstly as the chief minister for 10 years from 1985 to 1994 and secondly, as deputy chief minister for 15 years from 2004 to 2018. However, he failed to resolve the long-standing issues of corruption, illegal immigrants and freedom of religion, which were the causes for the formation of PBS.

Instead, by becoming deputy chief minister to an Umno chief minister, he ended the system of rotation of the post of chief minister among the three major communities, with the Kadazan Dusun Murut (KDM) being treated most unfairly in the process.

What is most important in Saturday’s election is to underline the importance that principles and public interest must drive politics and not personal or party interests.

I am very disappointed that yesterday’s cabinet meeting failed to take the important decision to make the Keningau Batu Sumpah and its three pledges of freedom of religion, land as a state matter and the perpetual protection of adat istiadat (traditional ceremonies) as agenda for the Special Committee on the Malaysia Agreement 1963 (MA63), which was announced by Muhyiddin in Sibu on Malaysia Day.

PBS can come and go, but the interests of the ordinary people must always prevail – and this is why there must be united and solid support for Warisan Plus candidates on Saturday.