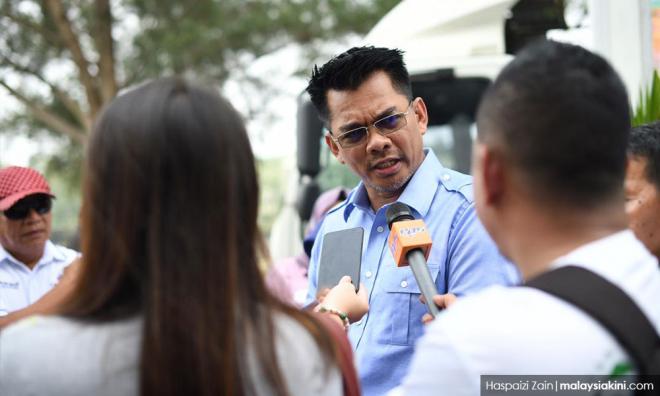 Azis: Rivals who peddle 'unlawful citizenship' claims have 'no brains'

SABAH POLLS | Parti Cinta Sabah and Parti Solidarity Tanah Airku (Star) may not be in the same camp, but they have one thing in common.

Both parties have been peddling allegations that Warisan was complicit in a scheme to grant citizenship illegally.

The narrative used by the leaders of the two parties is starkly similar.

They claimed that when there are fires in squatter areas made up of undocumented migrants, the residents will rescue their furniture and not their identification papers.

Following this, the fire victims would ask the government for birth certificates and identification cards, or as their stories go.

When contacted, Warisan Youth chief Azis Jamman (photo, above), a former home deputy minister, said the allegations by PCS and Star were ludicrous.

He said only the federal government has the power to issue identity cards and birth certificates, not the Sabah chief minister.

"Perikatan Nasional is the federal government. Not Warisan.

"Only people with no brain, like the leaders or supporters of Star and PCS, will accuse us of that," he said.

Azis' party Warisan has been struggling with allegations that the party consisted of, or was supported by, unwanted migrants who entered Sabah illegally.

Malaysiakini observed that Star president Jeffrey Kitingan used this narrative during a rally in Tambunan on Sept 21.

"What happened after Warisan took over (in 2018) was a lot of squatter areas were burnt down.

"Then, the National Registration Department showed up, not the Welfare Department. What was lost (to the fire was) the identity cards and birth certificates," he said.

"(The victims) saved their televisions, clothes and beds. Why didn't they save their identity cards or birth certificates?

"This is (Warisan's) priority. This is their legacy. They are saving the 'PTI', who should be deported, caught or kept in jail. Am I right?" Kitingan (below) roared, as the crowd applauded with approval.

The term "PTI" (pendatang tanpa izin) is frequently used in this election campaign.

According to the 2010 census, one in four Sabah residents are non-citizens, and hence the territory has the highest proportion of non-citizens in the country.

His version states that the fire victims "might" become Malaysian citizens if they were given identity cards and birth certificates.

Speaking to Malaysiakini later, Anifah said it was "mind-boggling" that the fire victims chose to save their furniture and refrigerator but not their papers.

"There are some places where the NRD vehicles appeared. Why is that? A lot of people speculate.

"The fact is, it does raise some questions," said Anifah, who alleged what he was describing was well documented by the press and on social media.