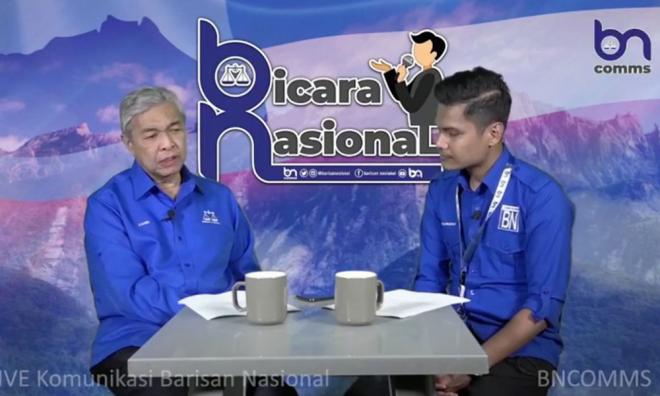 Zahid: God-willing, next Sabah CM will be from BN

SABAH POLLS | BN and Umno president Ahmad Zahid Hamidi is holding on to the hope that the next Sabah chief minister will be from BN.

Speaking during a BN Facebook Live session on the eve of polling day for Sabah, he urged voters to give BN candidates - many of them new faces - a chance to prove themselves.

He assured that victorious candidates would be assigned a key performance index (KPI) to ensure they served the people.

“Even though I was not involved in choosing the candidates, I will monitor the new chief minister who, God-willing, will be chosen from among the victorious assemblypersons representing BN.

“And for sure, I will give my best service in terms of advice to the new chief minister. I will offer my best advice in the interest of the Sabahan people,” Zahid said.

BN is contesting 41 seats in the Sabah election.

State opposition alliance members Umno and Bersatu were previously engaged in a public dispute over the coveted chief minister position.

On nomination day almost two weeks ago, Bersatu president Muhyiddin Yassin had mooted the party’s Sabah chief Hajiji Mohd Noor for the role but Zahid dissented and said the decision would be made by BN assemblypersons and their political allies post-election.

No mention of Anwar Move

Zahid, however, made no mention of any BN or Umno MPs supporting PKR president Anwar Ibrahim’s plan to form a new government during today’s Facebook session.

His aide later confirmed with Malaysiakini that the dialogue session was pre-recorded but aired this afternoon.

According to Bersatu secretary-general Hamzah Zainudin, Zahid is presently under self-quarantine as a precaution against Covid-19 infection.

He has cancelled all his campaign events in Sabah for the day.

Read more: What are the possible scenarios following Anwar Move?

After Anwar claimed on Wednesday that he had secured the support of several government MPs to garner a “solid” majority in the Dewan Rakyat, Zahid revealed that “many” BN and Umno MPs were indeed backing the opposition leader.

However, Zahid did not reveal the identities or number of MPs involved.

It remains to be seen whether Anwar truly has the numbers and whether he will be granted an audience by the Yang di-Pertuan Agong to present his case for a new government.