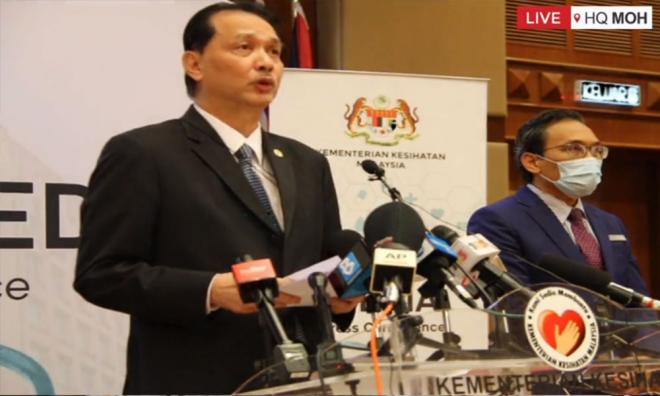 COVID-19 | Malaysia reported 260 new cases of Covid-19 today of which only one was imported while the remaining 259 were locally-acquired infections.

Health Ministry director-general Dr Noor Hisham Abdullah noted that this was the second-highest increase in the number of cases in a single day, after the 277 cases recorded on June 4 amid the outbreak at the Bukit Jalil immigration detention depot at the time.

The third-highest was 235 cases in a day, he said, which was recorded on March 26 when Malaysia was under the first phase of the movement control order (MCO).

“If you look at the latest increase in the number of cases, it is concentrated in the two states of Sabah and Kedah.

“However, we are now seeing new cases and clusters detected in other states,” Noor Hisham told a press conference in Putrajaya today.

He said the ministry welcomed Senior Minister (Security Cluster) Ismail Sabri Yaakob’s announcement earlier today that inter-district travel in Sabah will be banned beginning Oct 3 and hoped that would help contain the spread of Covid-19 in the state.

“At the same time, the Health Ministry and related agencies will try their best to control the spread of Covid-19 in the whole of Malaysia. The cooperation of all parties is much, much needed,” he said.

Most of the locally-transmitted cases today were reported in Sabah with 118 cases followed by Kedah with 98 cases. In addition, 31 of the local cases today involved travellers returning from Sabah, bringing the total of such cases since Sept 20 to 119 cases.

Of the new clusters, Noor Hisham said the Bah Ketil cluster in Kedah involved a traveller ("Case 11129") who returned after travelling in Tawau from Sept 17 and 21 and has spread the infection to Baling and Langkawi.

The 39-year-old male started experiencing coughs and muscle aches on Sept 24 and sought treatment at a healthcare centre in Sungai Petani and subsequently tested positive for Covid-19 on Sept 28.

Contact tracing identified eight more cases that have been admitted to the Sultanah Bahiyah Hospital in Alor Setar and the Langkawi Hospital for treatment.

There were 252 people tested in this cluster so far of which nine were positive and 40 are still pending results.

The Selasih cluster in Putrajaya also involved a traveller returning from Sabah.

He developed fever and cough after Sept 25 and arrived at the Kuala Lumpur International Airport on Sept 27. He tested positive for Covid-19 the next day.

Contact tracing identified six more cases and all seven cases detected so far have been admitted to Sungai Buloh Hospital for treatment.

Of the 28 people tested in this cluster so far, 13 are still awaiting their results.

Contact tracing identified four more cases and all five cases have been admitted to the Tawau Hospital.

There were 126 people tested in this cluster as of noon today of which 110 are still awaiting their results.

In Selangor, the newly identified Jalan Meru cluster in Klang involved a 30-year-old male (Case 11148) who developed symptoms on Sept 24 and tested positive for Covid-19 on Sept 29.

Contact tracing detected another three cases in the cluster, and all cases have been admitted to the Sungai Buloh Hospital.

Noor Hisham said further contact tracing and testing for the Jalan Meru cluster were still being planned by the relevant district health offices.

Overall, of the 118 cases in Sabah today, 74 were from the Laut cluster in Kunak, and 10 were from the Benteng LD cluster centred in Tawau and Lahad Datu.

Another 10 cases involved the Bangau-Bangau cluster in Semporna.

The Bakau and Sakong clusters in Semporna, and the aforementioned Joo Hwa cluster, each recorded one new case for today.

Screening uncovered another 21 cases in the state:

In Kedah, 88 out of 98 cases reported today were attributed to the Tembok cluster in Kota Setar.

The Tembok cluster was first identified yesterday, following the death of a 46-year-old (Case 11207) prior to being diagnosed for Covid-19.

Noor Hisham said the outbreak had occurred in the “contained environment” of a prison, and the two cases identified yesterday were prison wardens.

A chart issued by the Health Ministry showed that three of the new cases today were the deceased’s wife and children (Cases 11376 to 11378), while 84 were prisoners.

Contact tracing for Case 11212 identified five cases, while another three cases were identified for the new Bah Ketil cluster.

Kuala Lumpur has recorded 13 new cases, 12 of which were detected during screening for travellers returning from Sabah.

Another case was detected during contact tracing for Case 11251.

Selangor also recorded 13 new cases, nine of which were detected during screening for travellers returning from Sabah.

Another three were from the aforementioned Jalan Meru cluster, and one other case was detected during the screening of patients with symptoms.

Five new cases were reported in Johor, four of which were from the Bakawali cluster in Johor Bahru that involved travellers returning from Sabah.

Three of the new Bakawali cluster cases (Cases 11371 to 11373) were family members of one of the index case’s (Case 10911) colleagues. The Health Ministry had previously identified six of Case 10911’s colleagues as infected.

Another case in Johor was detected during screening for travellers returning from Sabah.

In Putrajaya, five cases are from the aforementioned Selasih cluster, while another one was detected during screening for travellers returning from Sabah.

The following states have only found new cases during screening for travellers returning from Sabah:

There were 47 cases that have recovered from Covid-19 and have been discharged today, surpassing the 10,000 milestone to reach 10,014 recoveries so far.

The number of patients being treated in intensive care units grew for the fourth consecutive day from 16 yesterday to 20 today, though the number of intubated patients remain unchanged at three cases.

No new deaths have been reported today, thus the death toll still stands at 136 cases.