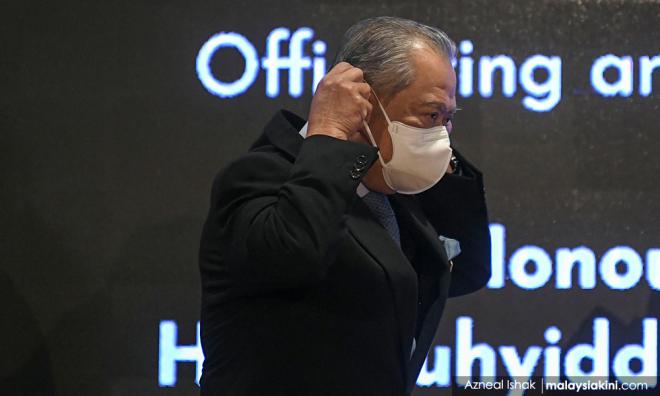 YOURSAY | Muhyiddin should take the 'rotan' to his colleagues

YOURSAY | 'And let's do it in public, with social distancing, of course.'

Oxymoronictendencies: Prime Minister Muhyiddin Yassin needs to face the reality that while the majority of the rakyat adhere to the SOPs (standard operating procedures), it is his colleagues who are the main culprits treating the SOPs with disdain and disregard.

He needs to discipline the politicians and their acolytes who are the primary reason for the recent dramatic increase in infection rates across Malaysia.

But he can’t do that because his razor-thin parliamentary majority would evaporate. But that is his problem to fix. He surely needs to take the “rotan” to his colleagues, and even himself and his acolytes.

Lead by example, Muhyiddin. If you want to be “abah”, then set the example to be followed. You, your colleagues and acolytes are not above the law, but it is clear that you lot think and act as though you are.

Your disdain and careless attitude are jeopardising the health and safety of the entire country. And you have the audacity to suggest it’s the rakyat who are failing to adhere to your SOPs. You need to look a lot closer to home!

Anonymous 540: There's nothing in Muhyiddin’s scripted speech that we are not aware of. It was quite a waste of time listening to him.

But his scriptwriter had missed something big time - that the PM should humbly apologise to the public for mishandling the Sabah events that caused the spike and poor border enforcement that imported the super spreader virus.

Bluemountains: First, cane the ministers who failed to implement the mandatory 14-day quarantine on all returnees from Sabah, starting from nomination day on Sept 12.

Why was the 14-day mandatory quarantine not implemented when Sabah was already a hotspot? Failure to implement it has allowed many politicians to roam the country and contributed to this new wave.

Many politicians were caught on camera without wearing a mask while campaigning and yet no actions were taken against them.

WhiteGiraffe1831: There are so many of us, spread across the world, who have been unable to see our families for many months now.

We wait patiently for numbers to come down and we do as we are told. It’s not that we don’t miss our loved ones, but we are literally having to choose between our jobs and families. How funny do you think your ‘rotan’ joke is to us?

Albert Ponniah: Covid-19’s sudden surge has affected Malaysians emotionally, this time more than ever because it is hitting them when they were feeling good that they are seeing an end of it.

So, any PM of a country should be very sensitive about this and not be joking about it. People are dying.

The PM must say the right thing at the right time. As heard, our PM just fell short of it. I hope he corrects this without hesitation. Humility at high pedestal is a human virtue. Its adversity is neglect by choice.

Headhunter: I totally agree with Muhyiddin that we should use the cane. Let's start with the wayward politicians first. And let's do it in public, with social distancing, of course.

Tentarik: You should take out the cane earlier and use it on Plantation Industries and Commodities Minister Khairuddin Aman Razali, then your ministers will all fall in line. Action speaks louder than words.

Rupert16: I can’t agree more. Another person who deserves the ‘rotan’ is former Sabah chief minister Musa Aman, whom Muhyiddin has set free to create the instability in the state government that resulted in the Sabah election.

If anything, Muhyiddin owes the rakyat a big apology for his ‘gila kuasa’ (power crazy).

Cyclonus: Muhyiddin, so now no double standards? Why not before?

While it would be unfair to say that your recalcitrant and entitled ministers were solely responsible for this situation, I would say that their attitude definitely had a significant impact on the outcome.

So here we are, faced yet again with another economic bludgeoning because of this outbreak and putting frontliners and the public at risk because of a selfish and reckless few who have even yet to face any consequence for their action - which would also serve as a deterrent to other people (especially politicians).

Mr PM, the cabinet and your ministers report to you. Please do what's right and necessary by us and put aside your political considerations.

Vijay47: It is good to hear that the government does not practise double standards. So, when is the full range of investigation on Khairuddin going to be completed and firm action taken?

Remember, “The compound fee was paid on Aug 7” does not wash.

Beman: No double standards? Who would believe this as long as no action is taken against the minister who recently ignored quarantine regulations after returning from Turkey?

Perakian: “Also in quarantine are seven ministers and six deputy ministers. None are exempted.”

What is so special about them? Ministers are politicians are voted in by the people, they work for the people. They should not be treated as VIPs at all.

Mohd Bakri 3: I don't understand. Muhyiddin said not to play the blame game. But awhile back, they said this Covid re-emergence is due to illegals crossing over into Sabah.

Why were illegals only crossing over into Sabah during the campaigning period when they know security is actually meant to be heightened? Something doesn't make sense there, right?

Hang Babeuf: "Muhyiddin stressed that now was not the time to point fingers and urged Malaysians to ignore those who are trying to politicise the pandemic."

As things fall apart, and the nation falls into this pit of infection, far more than this weak and pathetic admonition is needed, Tan Sri!

Are you the PM or not? Many people think you are not a legitimate PM. That is them. But you are not behaving as if you are convinced of your position, your right to hold it, your authority, either. Even if you are a fake, you should at least try to act the part!

GrayHawk8513: I was expecting the announcement of some additional actions to curb the outbreak and maybe some plans to help citizens who are economically impacted by this new wave.

YOURSAY | Covid-positive VIPs: A case of don't do as I say
7 Oct 2020
The VIPs who were infected after Sabah polls
6 Oct 2020
Muhyiddin’s ‘rotan’ joke receives backlash from netizens
6 Oct 2020
COMMENT | Kluster Menteri: How politics could literally affect your health
5 Oct 2020