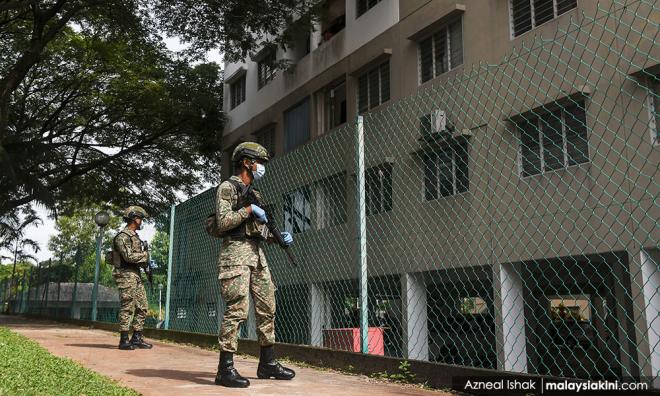 1. The conditional movement control order has been announced for Selangor, Kuala Lumpur and Putrajaya beginning midnight tonight, while parts of Sabah not already under the tightened restrictions will have the same, beginning today. Here’s a quick rundown of what you can and cannot do, which will be updated as we learn more.

2. While some may see imposing conditional MCO on the entire Klang Valley and beyond as drastic, Health Ministry director-general Dr Noor Hisham Abdullah said this is the best course of action, given the scattered nature of the cases as a more targeted approach would fall short.

3. Noor Hisham has again appealed for aid and volunteers to step forward and help fight the Covid-19 pandemic, while the Sabah Health Department listed RM1.7 million worth of equipment that it sorely needs.

4. Once again, the Selangor government appears to be left out in the dark on the federal government decision to tighten Covid-19-related restrictions on the entire state.

5. PKR president Anwar Ibrahim is slated to meet the Yang di-Pertuan Agong today on his claim of having secured a parliamentary majority. The party has urged supporters not to hold gatherings, while police have begun investigating a purported list of MPs who supposedly support Anwar’s claim.

6. The troubled airline industry will be facing more turbulence ahead as AirAsia and Malindo Air lay off workers, while Malaysia Airlines struggles to convince leasing companies on its restructuring plan.

7. As the government prepares to table Budget 2021 on Nov 6, Finance Minister Tengku Zafrul Abdul Aziz said it is considering consolidating its various direct cash assistance programmes to those in need.

8. Pahang Menteri Besar Wan Rosdy Wan Ismail and 10 state executive councillors are out of quarantine after testing negative for Covid-19, but the list of places affected by the disease continues to grow to include a second case at Mid Valley Megamall. Tropicana Golf and Country Resort is being investigated for allegedly failing to comply with orders to shut down.

9. A witness testified at Ahmad Zahid Hamidi’s corruption trial that the former deputy prime minister knew his credit card payments were being made with Yayasan Akalbudi’s cheques.