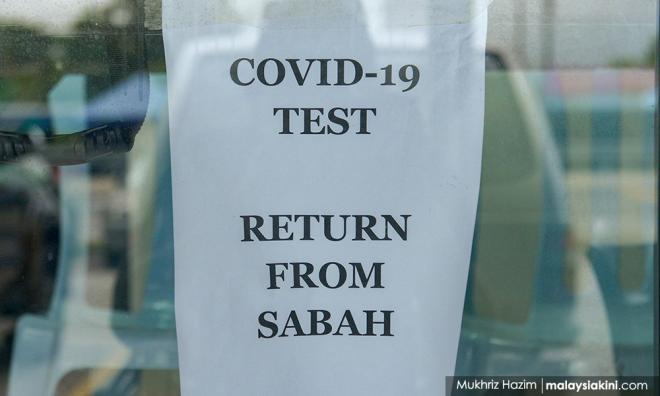 YOURSAY | ‘Delays in containing Covid-19 due to incompetency’

YOURSAY | ‘The evidence is clear. Who is ultimately responsible for it? Politicians.’

Coward: That the virus has its field day in Sabah might not be avoidable, but the extend of the seriousness of the situation could have been mitigated if sensible precaution, such as physical distancing, had been practised.

The evidence is clear. Who is ultimately responsible for it? Politicians.

Fewer big gun opposition leaders are affected by the virus than those from the ruling party. So, there must be something the opposition had been doing right. Almost all pictures from Sabah with the ruling party leaders campaigning sent chills down the spine.

Then there is the issue of not requiring quarantine after people came back from Sabah to Peninsular Malaysia. The opinion in public is that politicians don't want to be quarantined so that sensible precaution was not taken.

This, coupled with senseless action by politicians where they don't even bother to act sensibly by cutting down their public engagement, make the situation in Peninsular Malaysia worse.

Iphonezours: The root cause of this third wave is due to:

1. Politicians/ministers who did not comply with the standard operating procedure (SOP);

2. The government’s wrong decision in not implementing mandatory quarantine for all returnees from Sabah;

3. Incompetent authorities in Sabah in not following SOP when handling undocumented migrants; and

4. Unnecessary Sabah state election due to the traitors, which led to the dissolution of the state assembly.

Due to the incompetency of this government, the rakyat suffer.

Asitis: "The situation in Sabah, because of the state election, was unavoidable," said Prime Minister Muhyiddin Yassin.

The situation in Sabah, because of the state election, could have been avoided had your people not been power crazy and tried to take over the state government.

And now, after all that has happened, you offered not even an apology, but a flimsy justification.

Salvage Malaysia: Indeed, the state election was unavoidable because of the plot to take over Sabah when the pandemic was still around.

So Shafie Apdal had no choice but to call for a snap election rather than handing the state government to Musa Aman.

Why was Perikatan Nasional (PN) so power crazy? Now someone else wants to steal the throne from you, you advised everyone to focus on Covid-19 and economy.

But when you want to steal someone else’s throne, did Covid-19, the economy and rakyat’s suffering come into the picture?

Odysseus: No, it's not due to unavoidable reasons. This is more like sweeping it under the carpet. But when the infection exploded in Selangor and Kuala Lumpur, PN had no choice but to take actions.

Well, it’s too late now. Everyone knows why actions were not taken. It's to allow the politicians to slip through after Sabah state election.

IndigoKite6964: Put it this way. I caused a pile on the road and someone was seriously injured, but I told the police it was unavoidable and what’s done is done. Do you think the police will let me go scot-free?

He would probably tell me to dream about that in the lock-up. So, I want to tell Muhyiddin to dream about the number of people who are sick and have died because of the “unavoidable” thing that he did.

I certainly can't live with that on my conscience, but the politicians probably can.

6th Generation Immigrant: I agree. And as for the Batu Sapi by-election, of course there's a solution. Just allow a single nominee (Warisan) to file his/her nomination and then he/she should be declared the winner uncontested.

The seat was Warisan's and the late Liew Vui Keong had not completed his term before he sadly passed away - the people had spoken then, and the term of office is still valid for another couple of years. This exercise will avoid campaigning and politicking.

What's more, it will adhere to the Federal Constitution. Basically, it only takes all political parties to come to a compromise because of Covid-19 and all of them doing what they preach.

AnakJohor1920: Muhyiddin is only good in giving excuses after excuses and there is still no strict punishment on his ministers who defied the quarantine rule set by the Health Ministry. It’s double standards all the way.

You and your failed administration have taken lightly to the spread of this deadly virus in Sabah and now it is spreading in the peninsula. The rakyat suffer and the nation is paying a very heavy price for it.

And the most laughable thing I heard is that you are giving advice to the Election Commission (EC) on campaigning. Shouldn't it be the other way around? EC should be the one advising everyone.

Anonymous 79: Well, I guess it's time for Bersatu, Umno and PAS to show that their party is for the people.

These three parties should mobilise all their members to help Sabah. Umno has three million members, PAS has one million. They should go to Sabah and help the frontliners.

This is the time to show Umno, Bersatu and PAS really want to save our country. Walk the talk. There is no need to ask for volunteers or help from NGOs since these three parties have a lot of members and resources.

Umno should donate half of the party’s money to save the Sabahans. If at least 10 percent of the people from these three parties offer help, all frontliners in Sabah can take a rest.

Beman: It is not clear to me what the "unavoidable reasons" are.

There is only one reason I can think of and it is an avoidable one, and that is, the leaders in charge had failed in their duties as they were busily politicking in Sabah.