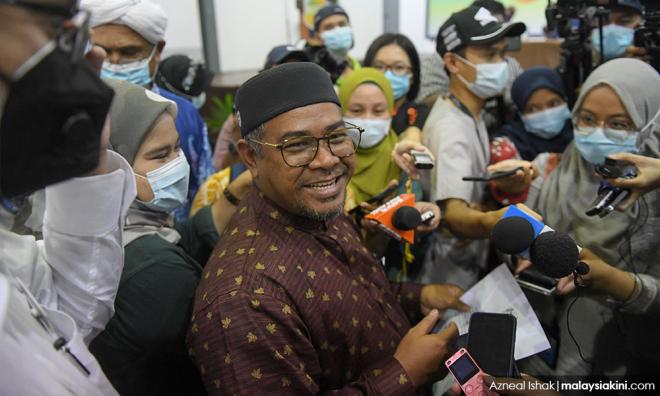 YOURSAY | ‘By raising issues like gambling and alcohol, he can expect massive support from the faithful…’

Khairuddin calls for ban on gambling, clampdown on alcohol consumption

Bobby0: Here we go around the mulberry bush again. This statement on banning gambling and clamping down on alcohol consumption by Plantation Industries and Commodities Minister Khairuddin Aman Razali is another diversion from the Covid-19 debacle that is already sinking our economy.

Why just gambling? Let us close all pubs, nightclubs, 4-digit outlets, the Genting Highlands casino and all other sinful joints in this nation.

With all these outlets closed, the government will collect fewer billions. PAS leaders have no economic sense in their heads. No wonder, Kelantan has to depend on the federal help to pay their civil servants.

With these people in position, the nation seriously looks like it has a bleak future. This is what happens when religion is involved in the decision-making of the nation.

6th Generation Immigrant: Khairuddin is quoting Islam based on its tenets of forbidding gambling and the consumption of alcohol, which he champions, and yet he is himself unable to adhere to simple and temporary societal tenet regarding social practices during a universal pandemic.

Isn't he truly already a live and typical example of a hypocrite? And, isn't he not collecting his four month's salary a gamble itself to deflect the rakyat's fury against him breaking simple laws (leave alone, the Quran for lying)?

He (as a cog in our government) should and must own up first before administering any spiritual and governmental good onto others.

IndigoKite6964: There are many forms of gambling. Some are high stakes and game of chance, which has been the ruin of many lives.

However, is ‘social welfare lottery’ gambling? The money collected there goes on to support the poor. Is ‘lucky dips’ gambling? Is ‘buy something and you stand a chance of winning’ gambling? Is taking a drive on the road in your car gambling? Or going out to vote in the Sabah election gambling with your life because of the spreading virus?

Any activity that involves a random event and a favourable outcome that results in a profit or prize is gambling.

I suppose PAS was trying to get Malaysia to be a less immoral society. Nonetheless, before they should even attempt to do that, how about PAS getting their own house in order first.

For example, begin by stopping their lying and adhering to laws like the movement control order’s (MCO) standard operating procedures (SOPs).

Why should we be listening to an alleged criminal? I did not prejudge him here. He has already admitted it by paying an allegedly backdated fine and giving his salary away. I suppose it is a gamble to stay out of jail ... but jail still beckons nonetheless.

GreenTurtle6724: Indeed, define what gambling is. Can you draw a line between taking potential "lose all" risks and harmless entertainment?

As for alcohol sales to be reviewed to prevent Muslims from buying it, they already know (or they should know) that they should not purchase and consume it, and take the initiative not to do so.

Therefore, this prevention is a non-issue and immaterial. As for drink driving, there are already laws to deal with it.

At the end of the day, all laws and rules can be abused, even with strict monitoring and enforcement. It is more useful to change the people’s attitude by imparting useful and relevant information and by providing pertinent education.

Newday: Khairuddin, it is good to read your position on all things that need to be banned. You are clearly stating your position from your religious perspective. That is your right to hold such views.

I disagree with you, as is my right to do. We are not a religiously-ruled society but under secular laws designed to accommodate our multicultural mix.

Cyclonus: I don't understand why Khairuddin as plantation and commodities minister is making these statements.

Perhaps all this loud barking is to deflect an impending consequence of his previous wrongdoing and in the process to garner support with hopes of mitigating any action by the authorities.

Politicians such as him don't add any valuable input to the system - conversely, they burden us with their cost and diversion of valuable government resource to do more beneficial work for us.

Vijay47: This is a true tragedy of biblical proportions – if only I could attach four numerals to Khairuddin, I would be the curse of Magnum 4D with my wins at every draw, he is so predictable.

But the confusion is the paradox Khairuddin offers us, that gambling and the occasional ‘yam seng’! are the real challenges facing the Muslim community.

Remove these two vices and voila! it is “Next station - Heaven. Please mind the gap!”

Obviously, the Kelantanese do not suffer adversities like unemployment, drug addiction, infant abandonment, and incest; even if they do, these can fall under that useful category of “Test of God”.

Fortunately, such setbacks can be forgotten through the caress of a soft Mercedes Benz – in any case, the crossing of Sungai Golok to acquire a young Thai bride or two can be even more pleasurable, ‘sawadeekap’. Or is that ‘sawadeeka’?

Khairuddin’s brilliant cunning must surely be applauded. By raising issues like gambling and alcohol, our inveterate traveller can expect massive support from the faithful – having turkey for dinner and breakfast and disregarding the annoyance called corona SOP can be placed on the backburner. After all, this defender of the religion single-handedly brought back RM82 billion from Turkey.

The only thing left now is to send a transcript of his interview to PAS appointed member Aliakbar Gulasan as the young novice will certainly need a helping hand in his early days at the Sabah Assembly.

Heck, send a copy to the Kitingan brothers also.