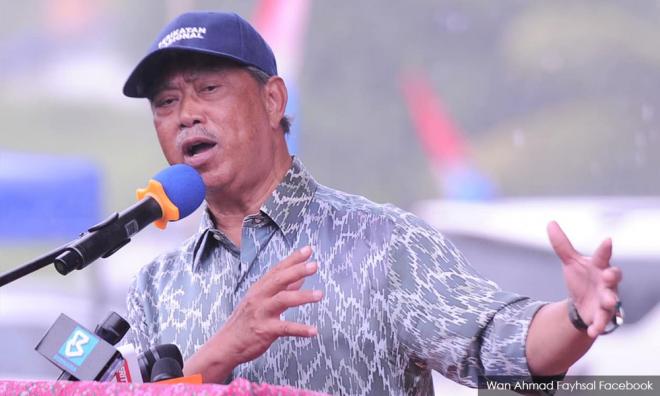 YOURSAY | Will Muhyiddin give in to Umno’s demands?

YOURSAY | ‘A PM cannot entertain the whims and fancies of his MPs every time they request it.’

Kita Orang Biasa: Prime Minister Muhyiddin Yassin, never in the history of Malaysian politics have we seen parties supporting the ruling government making open demands and you as the PM is willing to accommodate them.

Next, they will demand that all corruption charges on Umno leaders be dropped. Are you going to accommodate that too?

How shameful, this is what happens when you deny the rakyat’s choice by plotting a backdoor government earlier. May we say that it serves you right?

Now it seems like the PM can be openly bullied, and Muhyiddin may become the shortest-serving PM of Malaysia.

Bobby0: Bersatu, when it was with Pakatan Harapan, was exactly playing top dog with the PM in their cap, important ministries under their charge and some of the states under their wings.

With a change in partners, Bersatu even holding on to the PM's position is being held hostage by Umno and they have to please its other partner, PAS.

They have lost two states and even in Perak they are outnumbered. Now Umno comes for the jugular to take over more powerful positions. This will lead to Bersatu further weakened and sure to face extinction in the next elections.

Muhyiddin should have stayed put in Harapan, and he would have hardly faced such tensions. Tensions that are not good for his health especially.

They say karma when it comes, it comes back with an extra sting. We can see it now in action as Muhyiddin deserves to be treated the same way he treated Harapan.

Sentinel: This is so funny. The ultimate game plan of Umno is to kick out whatever remnants of Harapan is left, and that includes Bersatu. Muhyiddin, they can't forgive traitors like you.

You have got to give it to Umno. They will reassert their power and ensure that there is no more democracy once they get their hands back in government. Good going, Bersatu and PKR defector Azmin Ali and company.

Gerard Lourdesamy: Muhyiddin, Umno is not that dumb to put their demands in writing so that you can take it to town and discredit Umno by making their demands public.

The demands have been explained to you on Wednesday night and yesterday. So why must it be in writing? Did you write to Umno in February to get their support to become PM?

The fact that Umno secretary-general Ahmad Maslan has deferred issuing the letter until the Umno supreme council meeting is a clear indication that no letter will be issued.

The request for the letter proves the bad faith of Muhyiddin and Bersatu.

Better Malaysia: Now they are all playing politics when the rakyat is suffering.

The terms demanded by Umno will likely include to drop Umno president Ahmad Zahid Hamidi’s case and pardon former prime minister Najib Abdul Razak? Some others need ministerial posts too.

All this is the consequence of Harapan not cleansing the corrupt leaders and no law reform such as anti-party hopping as Mahathir was busy wooing Umno MPs to form a unity government.

Essentially the Malay parties got into this mess. The no-confidence vote and general election will not resolve this. The rakyat must retire old politicians.

Mosquitobrain: Umno and PN can continue to negotiate until the cows come home.

Anwar actually does not require the whole Umno battalion. He does not need 30 or even 15 of Umno’s lawmakers. Just five sincere souls are enough to stir PN.

And at the same time, Anwar can put Pejuang inside a bin. Let Mahathir continue complaining Anwar does not want his support.

HangTuahPJ: Is this a joke? Is this country a democracy? Is this how the government is elected? What are they taking us rakyat for?

Umno might just demand that all charges be dropped against those who have stolen from us. Please, Your Majesty Yang di-Pertuan Agong, just demand a vote of confidence in Parliament at the earliest moment before this country becomes a joke for the rest of the world.

The fact that Perikatan Nasional (PN) is allowing Umno to make demands proves that they are no longer holding the majority votes.

GrayPuffin9604: With all the top posts taken, what more can Muhyiddin offer to Umno? Swapping those existing positions would create another headache.

Weird Weirder: Basically, any group with three or more MPs on their side can state their demand and the PM will have no choice but to give in to all of them if he wants to keep his post. Thus, he will never be able to make everyone happy and keep a majority in Parliament.

Umno basically wants all the things Azmin wants or has.

Century Egg: A sitting PM cannot entertain the whims and fancies of his supporting MPs every time they request it.

How is he going to pacify his fellow supporters who assisted him in the takeover of a government via the back door, especially the one that has already entrenched himself in the deputy prime minister’s official residence?

YellowMarlin8834: Muhyiddin, you said you didn't want to be the PM. Malaysia doesn't belong to you and just because you want to continue being PM, are you willing to allow unfit and unqualified individuals to be in the cabinet?