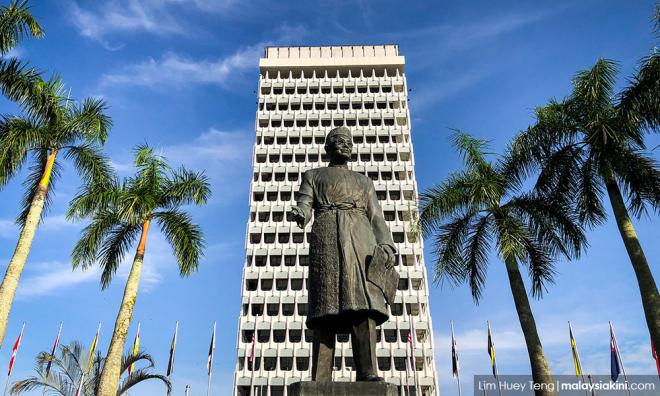 YOURSAY | Let all contending leaders prove their claims in the House

YOURSAY | ‘Without a show of hands, the problem will be dragged on and worsen.’

The media is running with stories of secret meetings and royal summonses, of letters and lists, the police are issuing warnings about causing confusion and summoning a politician who has refused to issue any list, the appointed Parliament speaker is making pre-emptive announcements through the media, and the markets are down. Aren't these indications of uncertainty?

So, in whose selfish interest is this "uncertainty" being deliberately prolonged? Why are decisive, constitutionally compliant remedies to clear the palpable uncertainty not being allowed to kick in? Who stands to gain if the uncertainty prevails?

Will those who subverted an elected government and seized power in February say that the country is enjoying political stability now?

Why is political uncertainty so undesirable? Because even after more than 60 years of independence, the country really does not have the means or the methods to manage such uncertainty.

Gerard Lourdesamy: With all due respect to the Agong, shouldn't His Majesty be asking the PM to prove his majority in Parliament, and if not, resign? A government without a majority in the Dewan Rakyat is not only exercising authority and powers unconstitutionally but also unlawfully.

The role of the sovereign at present is to: (1) determine if the PM still has the majority in light of the representations made to the king by PKR leader Anwar Ibrahim and Umno’s Tengku Razaleigh Hamzah, and public statements by Umno president Ahmad Zahid Hamidi and former premier Najib Abdul Razak and (2) to determine who is likely to command the confidence of the majority in the House.

The king must remain above party politics. His constitutional role cannot be delegated to politicians on the basis of negotiations and compromises. The conditional movement control order (CMCO) is not a sufficient reason to avoid exercising constitutional powers.

If no leader or party has the majority, then the king should dissolve Parliament on the advice of the incumbent PM. It is obvious that the current PM will not allow a motion of no confidence to be tabled and debated in the House.

All that is left is to vote down the supply bill which would have serious financial and economic implications to the country provided that the next session of Parliament is not delayed or postponed using the CMCO as an excuse.

If any sitting MP can show proof that he has the support of at least 120 MPs in the House to ensure a stable government, why shouldn't he be appointed as the PM?

BlueShark1548: The nation has been in a state of uncertainty from the time Muhyiddin Yassin was appointed PM without disclosure of the number of MPs supporting him. Condition should have been imposed on Muhyiddin to hold a vote of confidence at the first sitting of Parliament.

He had since refused to face the vote of no confidence submitted by former prime minister Dr Mahathir Mohamad and thereby gave the impression that he had no majority and thus created uncertainty. Our politics had since then been either for maintenance of power or grabbing power.

It is ridiculous for anyone to suggest that Parliament be prorogued or suspended under emergency. Anwar allegedly has the numbers, why is the government scared to give him the opportunity to prove it in Parliament?

It would be very unhealthy to deny Anwar the chance to prove his claim. The reasons given by the House speaker are unacceptable and he is ill-advised. Why are the odds stacked against Anwar? The rakyat should not tolerate a backdoor government who refused to face a vote of no confidence!

The idea that Najib could get off the hook will definitely destabilise things, Malaysia would lose all credibility with other nations and it would normalise the kind of theft we saw from the Najib regime, these things are all bad for long-term stability.

The country needs a government that will govern with the nation as the top priority, not their personal greed. Without that, how can there ever be long-term stability?

The people spoke at the last election, they have now been told that it does not matter what they think as politicians refuse to act with integrity, and for position and power, the people’s mandate was overturned.

I wonder if Anwar has the numbers to be PM but I am certain that Muhyiddin does not have the numbers to govern either. We should blame those who brought down the elected government, grasping for power when agreements had been made.

Now in the middle of a pandemic, we have a government who does not have a mandate from the people, the blame for that lies squarely at the feet of Azmin and Muhyiddin.

Anybody who acts with integrity is not afraid of losing power, they use power for the benefit of the nation, not themselves. They recognise that power does not belong to them per se, it is given by consent and that consent can be withdrawn.

Pokokelapa: The rakyat are fed up, tired and sick with the Covid-19 and MCOs caused by these politicians, who have no concern for people's lives.

We were patient during the first and second wave of Covid-19. We followed standard operating procedures and the frontliners gave their all.

The politicians are there only for their own well-being, nothing else. They should help the people who are pleading for all this to stop and the priority is to get the Covid-13 third wave under control. Next, is to get the economy back on some good footing.

The healthcare workers are stretched to the core. They cannot be bearing all this fallout from these politicians. The unemployment rate is pretty bad and people are struggling to put food on the table.

His Majesty is in touch with the state of affairs and wants the best for the country and its people. Please save us from these politicians. Daulat Tuanku.

Heron: There is profound wisdom in the Agong’s advice. The ongoing and current disquiet as is obvious from recent discourses in political circles and politicians is in some ways a consequence of a sense of political uncertainty engendered in recent times.

Admittedly a raging pandemic which takes a heavy toll on human livelihood and wellbeing of our people is not the time in such socioeconomic emergencies to promote any socio-political agenda other than one of fostering national unity, above else.

Raja Chulan: This tug of war between political parties must be solved based on rules that are already there. A simple show of hands and that is all. Without a show of hands, the problem will be dragged on and worsen.

The Agong can prevent the delay from happening. An emergency sitting of Parliament will get this sorted out once and for all and in the open. The will of the people shall prevail over all other interest.