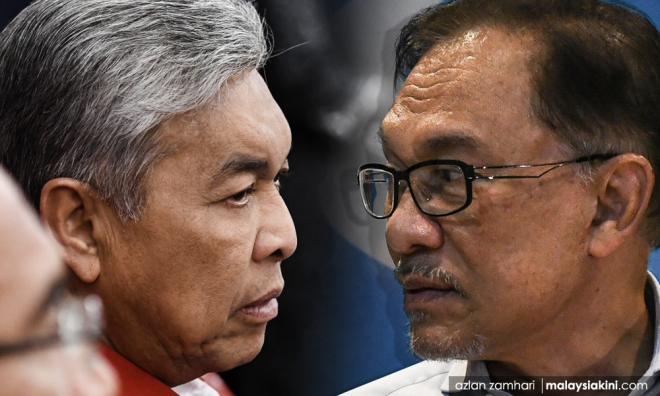 YOURSAY | 'Zahid probably promised Anwar something, got threatened and withdrew.'

Umno has change of heart, backs PN and calls for 'political ceasefire'

The Wakandan: It was obvious that Umno president Ahmad Zahid Hamidi and former prime minister Najib Abdul Razak could never be PKR president Anwar Ibrahim's allies due to many reasons. One is that they are just incompatible.

Even if Anwar wants to, his politics cannot, since the two (Zahid and Najib) are linked to corruption, the very personalities that Pakatan Harapan wanted to topple.

We thought maybe Anwar is not that gullible - not to join hands with tainted Umno members but with those who still have their reputation that is salvageable. If indeed Anwar wanted to team up with Zahid and Najib, then he was doing the unbelievable and as such, he should not be the people's PM.

It is hard to see how Anwar can rise again after this. It was a foolish mistake but it also shows his calibre or rather, very little of it. If he is so plain as to get trapped and used by political adversaries like that, then he should not be PM of the nation, where the responsibility is even bigger.

The chapter of this episode is almost closed; there is probably nothing else to see and wait for.

YellowEagle3055: This entire debacle has shown a few things. Umno, as usual, is untrustworthy. Zahid probably promised Anwar something, got threatened and withdrew. The whole government security apparatus is at the present government’s disposal.

The intense rivalry between Bersatu and Umno, as seen on Twitter and Facebook, will not bode well going into elections. There will be bitter rivalry, fight for seats and sabotage.

The discontent in Umno on Bersatu decisions, I'm sure, will cause Umno to try and eliminate them in the next election. Which may be held soon.

Harapan should take note, remain steadfast and united. Your enemies are divided, so there’s an advantage to you.

Kim Quek: Something important must have happened to Zahid, personally, to cause his complete reversal of stance against Prime Minister Muhyiddin Yassin and Bersatu.

Zahid went from threats to pull out his party’s support to reaffirming total support to Muhyiddin’s faltering leadership.

Only days ago, he claimed that for grave issues such as this – pulling out from Perikatan Nasional (PN) – the party, not him, must decide, for which a supreme council meeting was the answer.

Now, without such a supreme council meeting, he couldn’t wait to unilaterally declare Umno’s total support to PN.

What prompted Zahid to make such a stunning personal U-turn? Concession on cabinet posts as demanded is understood. But there should be something bigger than that for him – personally, that is.

What is it? Your guess is as good as mine.

Proarte: Zahid's support for Anwar, which the latter naively believed, turned out to be the scam that it was. It exposed Anwar as an insincere “reformist” who is willing to do deals with Umno, whose members have been accused of corruption, to become the prime minister.

Well, if anything, it has shown us that Anwar is not a reformist but very much an unprincipled opportunist as Zahid is.

Just as DAP stalwart Lim Kit Siang was willing to dance with the devil and do a pact with former prime minister Dr Mahathir Mohamad, who is the doyen of crony capitalism, racism and controlled kleptocracy. All this was done in the name of 'reforming' Malaysia and Anwar too fell for the same trap.

Both have been betrayed by these unscrupulous politicians and it does not absolve Lim and Anwar, but instead show them up to be at best, naive and easily conned, or at worst, people whose principles and values can be bought for what they deem to be the right reasons – i.e. political power, wealth and NFA (no further action) from criminal charges.

IndigoKite6964: According to veteran newsman A Kadir Jasin, back in 1998 when Zahid first betrayed Anwar, Zahid chose wealth and power over loyalty, which means we have a monster in the courtyard.

Then again, I get the feeling that most (not all) politicians will choose wealth and power over everything else. It is just that they aren't as big as Zahid? What hope does this country have when its leaders chose wealth and power as their real motives and beg to be given a second chance during an election?

In the end, one may say that we voted them in. That is true. However, we don't have many choices. We always have to make do with lesser evils and chuck them out when they get too big. It is a viable strategy and perhaps the only strategy we have.

Coward: Lim’s suggested link of Zahid making his U-turn, based on Plantation Industries and Commodities Minister Khairuddin Aman Razali being let off the hook for breaking quarantine, is tenacious at best.

The PM might have given PAS this pass as part of a larger set of conditions to get it to stay with him after he agreed to Umno's conditions. He had been saving this up for it.

Umno's interest in PAS is simply to make sure it does not get less than PAS. PAS’ best chance of being in government is with PN. PN does not need to fear that PAS will leave the ruling coalition.

XoXo: Zahid will not simply throw his support for Anwar without getting PAS on board. Without PAS, Zahid knows that he and Umno will be buried in Harapan.

Muhyiddin is "safe" as long as PAS is not giving Zahid security. Hence, the urgency for Umno to lure PAS into the Muafakat Nasional pact as a top priority.

Mohd Bakri 3: Is it because of the call by the Yang di-Pertuan Agong and the Selangor sultan for political stability and focus on the rakyat that Umno is agreeing to a temporary ceasefire?

Before everyone else jumps on Anwar, please note that this is politics. What they say one minute ago and what they do are two totally different things and in Malaysia, this is fine. Even statutory declarations have no weight as everyone can change their minds.

Conclusion: going forward, regardless of now or in future general elections, the rakyat have to be worried as what's the point of voting if, after an election, various political factions start to court the winners one by one to switch sides.

As long as that happens, it means we are voting for individuals and not for parties.

If an elected individual who wants to support another party can do so, but with his seat being replaced by another person from the same party and not his new party, that would create stability. Otherwise, Malaysia is going to crash and burn.